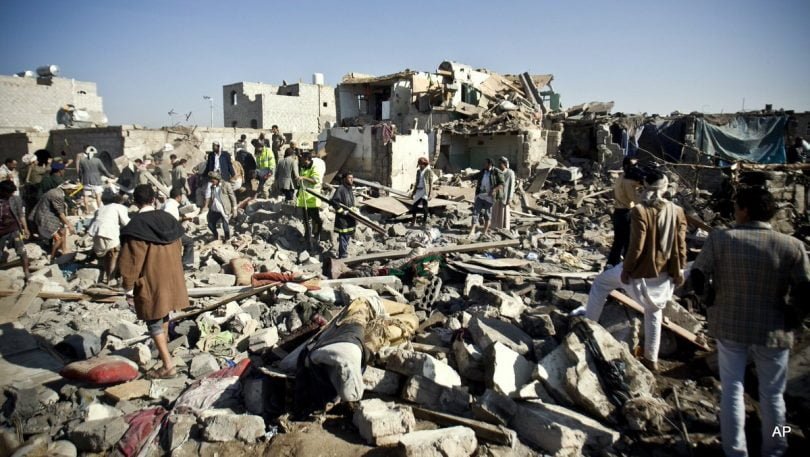 Since the beginning of the Syrian civil war in 2011 our Facebook news feeds have become a voice for the millions of people in dire need of humanitarian aid and shelter under Assad’s regime. For four months, Bilal Abdul Kareem from On The Ground News had been uploading videos of bombed out hospitals and reporting the breaking of cease fires in besieged Aleppo. Alongside Buzzfeed quizzes and internet memes, videos of Aleppo are accessible any time of day in any type of place. So in this age of 24/7 news it begs the question, why is nobody talking about the Civil War in Yemen?

The BBC’s coverage of Yemen has been gradually decreasing since an article in 2015 entitled "Yemen: crisis: who is fighting whom?” which outlines the differing fighting factions, quoting western intelligence agencies in part as their factual source. And this hasn’t gone unnoticed. On the social networking site Twitter, the hashtag #prayforYemen is increasingly accompanied by #forgotenwar as users demonstrate their outrage at the media ‘blackout’ on a worsening humanitarian crisis. Contrary to the levels of news coverage, the situation is deteriorating rapidly with an estimated 1,000 children dying a week from malnutrition and hunger.

Primarily, the very nature of an un-defined war in Yemen makes it extremely difficult for mainstream media to report on. Without a clear cut divide between ‘good’ and ‘evil’, information becomes unclear and contradictory to both reader and journalist, leaving people questioning what and who they should invest in.

Whilst Hadi (who is now in exile in Saudi Arabia) claims to be the leader of a united Yemen, he is also allied to the anti-Houthi tribal leaders and Sunni Islamists. And whilst Houthi rebels may be portrayed as a proxy of Shiite power in Iran, they still maintain their own grievances, leaders and decision makers, now backed by president Saleh, their former enemy. To add even greater confusion into the mix, Saudi Arabia entered in March 2015, after condemning Iran for supporting the Houthi rebels.

With Columbian fighters on the ground sent by the UAE and Islamist groups taking advantage of the southern port of Aden, no one side seems close to winning and so there is no one side to support, emotionally or financially.

Motivations for US involvement in Yemen can be traced back to one major starting point: the spreading of an Al-Qaida affiliate in Yemen, considered to be extremely dangerous to US foreign and domestic security. And with a bomb maker accused of plotting attempts on US planes intrinsically involved, there is mounting fear of a chaotic Yemen enhancing the group's political power.

There is also a strong desire to prove allied support for Saudi Arabia who is deeply troubled by the notion of turmoil in their neighbouring country spilling across the boarder and into their own. One thing is for certain, neither country wishes to see unstable oil prices seeping out of unstable oil shipments in the Persian Gulf.

There is however tension between relations, owing to the coalitions increasing number of civilian casualties, including reports that 140 people had been killed and further 525 injured when the site of a local funeral was heavily shelled. The White House immediately distanced themselves from their proxy war, condemning Saudi Arabia’s actions in the Middle East and promising to review their military support. As it stands, they are still supplying support to the Civil War in Yemen, but with discretion and little media attention, the proxy battle is usually recognised as one between Iran and Saudi Arabia alone.

When news stories fail to make audiences explicitly aware of their government's involvement in proxy wars, arguments can be made for a loss of interest in foreign affairs for everyday civilians, unconcerned through their lack of connection to the politics overseas. When social media became emotionally connected to the war in Syria, it was on the back of David Cameron’s failure to match Germany’s plee to accept 300,000 refugees in 2016.

Cameron said he would take in 20,000 refugees from Syria by 2020, and hashtags such as #sanctuaryforSyrians began to trend on twitter as a pledge to put greater pressure on the ex-prime minister to take in more. Public interest emerged because we became interested in the politics, the conversations of Westminster and our own reputation on a world stage.

That’s not to say all interest generated is political, obviously empathy does play a part in international responses and charities such as Save The Children are a true testament to the human compassion found amongst human genocide.

Aljazeera seems to be reporting in greater depth the effects of fighting in the country's largest city, Sana. A report on their website entitled “Yemen’s orphans face ‘catastrophe’ as fighting rages” explains the possibility of hundreds of children being forced to live on the streets: “The Dar Ri'ayat al-Aytam orphanage in Sanaa has been struggling with a lack of funds since Houthi rebels captured the capital in autumn 2014, and the situation has worsened in recent months.”

Ultimately, it seems to me that there are countless reason to care about Yemen, and several links to be made that go beyond strategic allies.