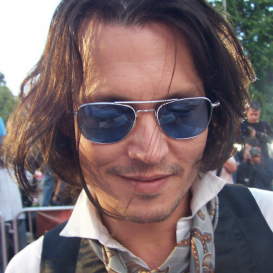 Upon the release of the greatly anticipated Depp thriller Black Mass, we look back at some of most acclaimed, weird and wonderful performances of Johnny Depp. In a career spanning over thirty years in the industry, Depp has played larger-than-life roles, forming new characters and also placing his own unique spin on classics. Here are our top five Johnny Depp performances.

Taking on the role of Roald Dahl’s Willy Wonka is no easy task. The classic tale has been read to children for decades, and is still on some school curriculums now. As Gene Wilder made the character come alive in 1971 in Willy Wonka and the Chocolate Factory, he made the part eccentric, loud, even obnoxious, yet still vaguely likeable. Depp chose to take a somewhat different route. He’s more mysterious, awkward, even freaky, in the 2005 hit. Gone is the loud and brash Wilder, replaced by the darkness of Depp. He is spell-binding in this adaptation, enticing the audience with his carefully picked words and motions making him appear almost robotic and unfeeling in comparison to the sweetness and innocence of Charlie.

Perhaps one of Depp’s most iconic characters, Captain Jack Sparrow in the Pirates of the Caribbean saga is one that cannot be ignored on a list such as this. Wildly eccentric, reckless and hysterical are a few words that spring to mind watching these performances. We just never know what he’s going to do or say next, making the plot twists and turns all that more thrilling. He uses wit, deceit and verbal onslaught to attain the character’s goals, perplexing both the audience and his on screen enemies until it’s too late to undo what he has done. Not only is this iconic, but Depp has frequently been reported to visit the children’s hospitals of America dressed as Captain Jack, to interact with and surprise his young fans.

The screen adaptation of J.M Barrie’s creation of Peter Pan, Finding Neverland sees Depp transform from his usual eccentric and colourful characters, into a loving, quiet creative writer. The film depicts the ideas and emotions behind the story of Pan, the heartbreak and the emotional turmoil that Barrie went through. Depp shows the struggles of being a writer, in finding love, yet not in his much accustomed to over-the-top and eccentric style. Rather, we see him as a father figure, loving caring, a role that provokes emotion and allows audiences to relate to the character.

In a Burton-Depp spectacular, Depp plays the frightful, murderous barber, Sweeny Todd. Complemented with a brilliant cast, including Helena Bohman-Cater, Alan Rickman and Sacha Baron Cohen, Depp is on another level or darkness and vengfullness, as Todd retaliates against the deceitful Judge Turpin. A cinematic masterpiece, with an elaborate sets and costumes to match, we see Depp riddled with vengeance, guilt and hate, perfectly portraying through song, the anguish of the character in the classically dark, twisted Depp way.

No Johnny Depp discussion is complete without the wondrous Edward Scissorhands. The tale, about a boy who wanted to fit in, is utterly timeless, mostly due to the brilliance of Tim Burton and the great acting ability of Depp. As with any Depp-Burton collaboration, we are shown the best and worst of humanity, making the film uplifting yet dark, tender yet frightening. Depp only says 169 words throughout the film, it is a testament to his acting ability to capture the audiences heart and imagination regardless.

Are you a Johnny Depp fan? Do you agree with our top 5? Let us know in the comments below!