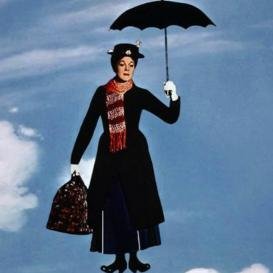 The power of cinema lies in the effects films have on people. Films can make you cry, laugh, alter your opinions, influence you, be representative of a milestone in your life and can even change your life. Kicking off our new weekly film column, ‘The Film That…’, which explores the impacts of cinema on people, Naomi Duffree lets us know how the wonderful and magical nanny Mary Poppins influenced her career choice.

In the beginning of Mary Poppins we hear, these mystical words,

“Winds in the East, Mist coming in, Like somethin’ is brewin’ And about to begin.

Can’t put my finger On what lies in store, But I fear what’s to happen

Indeed it did happen before. A magical film on the big screen and therefore unlikely to become my life – but try telling that to a wide-eyed 7 year old.

Mary Poppins tells the tale of a magical nanny trying to bring harmony to a London household. I was indeed struck by the idea of looking after cute children in a huge Georgian house, and once I’d set eyes on Mary Poppins, my heart was set on becoming a nanny and playing out her role. Starting with my desire to nanny in London, take the West End by storm and develop a love hate relationship with peanuts, this film has certainly had strong influences on my life…and not always for the good.

Since as long as I can remember I have always wanted to return to London, having lived there for a time,between the ages of 3 and 7. When we returned for visits I would sit in the back of the car dreaming of the day I would live in a house like the one on Cherry Tree Lane, where the Banks family lived. I hadn’t taken into account the housing boom/bust/crisis/shortage/ unbelievable London prices X number of years on. Understandable when you can’t even spell mortgage never mind understand the house buying process.

But back to the career move: nannying.

I wanted to be a proper qualified nanny like Ms Poppins. I remember telling my grandmother who told me all about the Norland Nannies who had a uniform and worked for people such as the Banks family that were portrayed in the film.  Mary Poppins was such a fun figure, kind, but fair to Jane and Michael, her charges (in comparison to some of the ones I ended up with these two were a doddle to nanny). I never did apply to Norland College; I answered an advert in the Lady magazine and acquired a job that needed no extra training, uniform or that hat.

I learnt the hard way that nannying is tough if you don’t have magic in your fingertips. To quote our Mary, “Every job that must be done there is an element of fun”…only there wasn’t in the household I worked for.

We never had time to fly a kite, feed the birds or josh around with the local sweep. Too busy cleaning for one thing. It actually put me off children for a while – and you’re reading the work of one who wanted eleven at one point. I went on to have two, but they still had to listen to me saying ‘spit spot’ many times when I needed them to hurry up. Yet, Mary did not leave me forever. I decided to knock nannying on the head early on in my career and concentrate on drama teaching…

This new career idea also has connections with Mary Poppins. I remember dancing around- shall we call it choreographing? – in my bedroom aged nine, miming away to my favourite LP of the time, Mary Poppins. I had this light bulb moment that the whole of the class could re-enact a couple of songs from the film for our class assembly. Couldn’t we? Well, no apparently we couldn’t. The teacher replied immediately to my suggestion that it would be too difficult for all the children to learn the words. Really? Not everyone knew the words to Jolly Holiday or Feed the Birds? What sort of children were they?

Yet another blow to my aspirations.

I also have to lay the blame at the door of my beloved film for a temper tantrum that developed over a period of months. Back in the day in Trafalgar Square people would sell peanuts so that tourists and those passing through could feed the pigeons. It seems unbelievable now. Each time I go into town I pass a sign stating a fine of £70 will be implemented if you feed the pigeons. But back in the 70’s it was the done thing. I was beyond excited when told we were going into Trafalgar Square to feed the birds – rather like they had done at St Pauls in the film. I was a very excitable child. We arrived on a double decker bus. I couldn’t wait. However, I was going to have to. The peanut sellers had run out! I was distraught and threw a complete wobbly right there in the Square. I obviously did not get this out of my system at the time; family folklore suggests that every time someone mentioned peanuts I would stamp my feet and grunt very loudly from my enraged purple face.

And breathe. I’m over it now; besides,I can’t afford the £70 fine. It was bad enough paying tuppence.

So as you can see Mary Poppins has a lot to answer for. I’ve always suspected that my ambitious streak was lacking somewhat and researching for this piece has confirmed it. Mary Poppins had such an effect on me that after I’d seen it I wanted to pursue a career in nannying (nothing wrong with that – it’s bloody hard work – even if Julie Andrews made it look easy). Yet Jeff Kurtti also watched it at the cinema, and I quote, “The childhood obsession started by Mary Poppins became a career.” He ended up working for Disney.

I’m off to find a spoonfull of sugar. I’ve heard it helps swallowing some types of medicine.