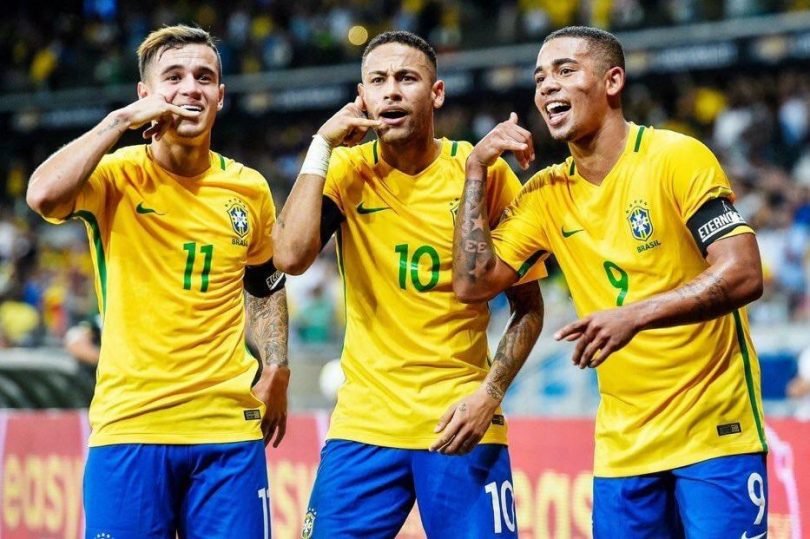 Two huge nations feature in groups E and F; Brazil and Germany. With nine World Cup successes between them, they simply cannot be ignored. These two are royalty when it comes to this tournament and surely at least one of them will be playing in the final in Moscow on 15th July.

They need no introduction. Full of history and success, world class players and controversial ones too, Brazil have been and always will be a giant on the national stage.

Seleção enter their twenty-first World Cup competition probably still hurting from what happened in their homeland four years prior. Hosting this famous competition is pressure enough but when you are a team like Brazil, winning becomes paramount. Clearly it was too much for the five times winners as they imploded so famously against Germany, losing 7-1 in the Semi-Final.

The Brazilian squad is looking very impressive, with potentially the strongest front three in the competition in Neymar, Phillipe Coutinho and Gabriel Jesus. Just in case those front three aren’t firing they also have the likes of Willian, Roberto Firmino and Douglas Costa on the bench. That’s almost unfair. A couple of unsung heroes man the midfield in Fernandinho and Casemiro, whilst there are a couple of notable absentees in defence. Alex Sandro, dubbed the best left back in the world by many, has been left at home for some crazy reason. Dani Alves misses out on what could’ve been his last World Cup as he is injured. I am both excited and Intrigued to see how Brazil bounce back from absolute embarrassment, surely winning it will be the only way to give them full redemption.

The Swiss qualified for this years World Cup via a tight play-off win against Northern Ireland, winning 1-0 over two legs. They now find themselves in a group where reaching the next round is a real possibility.

They have a decent team with a few creative individuals such as Xherdan Shaqiri, Josip Drmic and Breel Embolo, however they never seem to really set the world alight. I expect that trend to continue in Russia, with Switzerland failing to make it out of the group stages.

The surprise package from the 2014 World Cup, Costa Rica won their group featuring Uruguay, Italy and of course England. They then continued to defy the odds as they reached the quarter-finals, only to lose on penalties to the Netherlands.

Los Ticos will be determined to once again reach the knockout stages in Russia, as they are led by experienced heads such as former Fulham play-maker Bryan Ruiz, and Arsenal flop Joel Campbell. As well as these two they have a goalkeeper who has won the Champions League three times since the last World Cup, Keylor Navas. I think the honeymoon period of four years ago will be ended abruptly however, with Costa Rica finishing bottom.

Another one of my dark horses, Serbia. I can really see this team surprising a lot of people this summer.

Their 23-man squad is full of quality. Experienced heads in defence feature Aleksandar Kolarov and Branislav Ivanovic, mixed in with highly rated youngsters Milos Veljkovic and Nikola Milenkovic. The Serbian midfield is where games will be won, I believe. They have quality, ball winning CDM’s in Premier League pair Nemanja Matic and Luka Milivojevic. Southampton winger Dusan Tadic can be a game winner on his day and Aleksandar Mitrovic has just helped Fulham gain promotion back to the Premier League, scoring twelve goals in seventeen games.

The player I am most excited about though is Lazio midfielder Sergej Milinkovic-Savic. I truly believe this tournament is going to bring this twenty-three year old a big money move to one of Europe’s best teams. He is tall, powerful, but don’t let that fool you, the Lazio man is also great with his feet, and versatile too; he can play in a holding role, or push up into the number ten position. Coming off the back of a successful year win the Italian team, he played a vital role in Lazio qualifying for European football next season. Remember the name, you could be hearing a lot of it next season in the Premier League.

Now I know I have no expertise in managing a football team, or even picking a squad, but what the bloody hell is Joachim Löw doing not taking Leroy Sane to the World Cup?! This kid has just ripped up the Premier League with Manchester City, scoring ten goals and assisting fifteen in just twenty-eight games, whilst winning the league. Sane also deservedly won the PFA Young Player of the Year award, and still he hasn’t been picked. Criminal.

Saying that there is still an abundance of quality in this German team, who have conquered this tournament four times. This team is full of winners, including Manuel Neuer, Marc-Andre Ter Stegen, Mats Hummels, Sami Khedira, Ilkay Gundogan and Thomas Muller who have all had domestic success this season. Neuer is an interesting choice though, he has only played four times this season after suffering a couple of injuries to one of his feet. Will the lack of games have an effect on one of the best goal keepers in the world? Will he start when you have Ter Stegen who played all but one league game this season for Barcelona. Either way Löw has some questions to answer.

Mexico for me are one of those teams that I personally love to watch, their passion and drive really capture what the World Cup is about. They have reached the last 16 in the last six successive tournaments, but were harshly knocked out four years ago in Brazil when Arjen Robben appeared to dive in injury time to win the Netherlands a penalty, it was scored and the Mexicans were knocked out.

They enter this years competition perhaps favourites to finish second ahead of Sweden and South Korea and with good reason too. They have good attacking options in West Ham striker Javier Hernandez, Porto’s Jesus Corona, former Arsenal man Carlos Vela and highly rated winger Hirving Lozano. With Hector Herrera in midfield joined by the Dos Santos brothers Giovani and Jonathan, as well as veteran Rafael Marquez, I can see this Mexican team once again reaching the knockout stages and, who knows, maybe even make the quarter finals.

The Swedes have qualified for their first World Cup in twelve years, and did so by knocking out giants Italy in the play-off round.

However, they are heading to Russia without talisman Zlatan Ibrahimovic after he announced his retirement from international duty after Euro 2016. Without the iconic Zlatan leading the line, they look a little vulnerable. Apart from a few creative players such as RB Leipzig’s Emil Forsberg and former Sunderland and Hull creator Sebastian Larsson, Sweden do not look the strongest. I can’t see them scoring many goals, and it’s for this reason I expect them to struggle in group F.

South Korea are becoming one of the more consistent teams in this competition, for both good and bad reasons. Russia will be their ninth consecutive World Cup. However, they have only made it out of the group stages on just two of those occasions.

Captained by Swansea’s very own Ki Seung-Yueng, and spearheaded by Tottenham’s Son Heung-Min, the 2015 Asian Cup runners up have Premier League experience in their ranks, and that could be vital. Both Ki and Son would have come up against many of these players in the Premier League in recent seasons and can try and use that knowledge to help their team reach the knockout stages for just the third time. Son Heung-Min is going to Russia in fine form, scoring eighteen goals this campaign in many competitions, including the league, the FA Cup and the Champions League. Can he help carry South Korea past the group stages this time out?