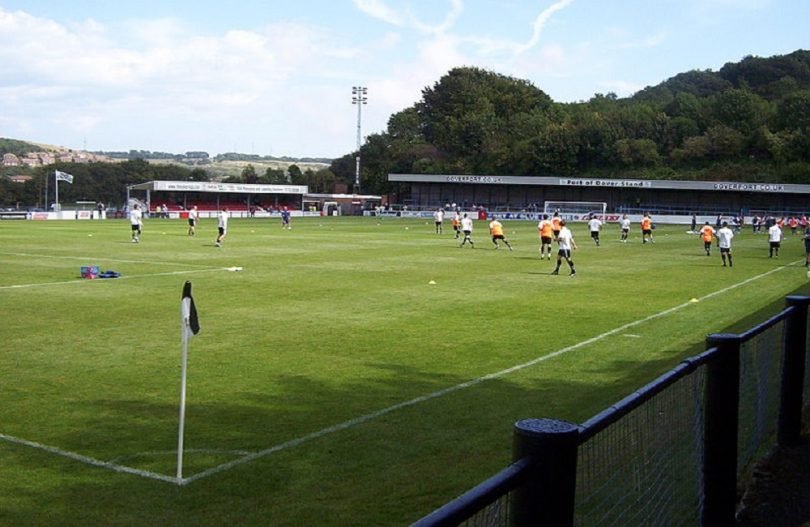 Picture the scene. It’s the final day of the National League season, forty five games played over nine long months. For Woking, they are ninety minutes away from crashing out of the league. They must win, and hope Barrow drop points against Chester, to stay alive.

For Dover, it’s a very different picture. They still have a chance of reaching the playoffs; they need to win and rely on other results going their way to keep the dreams of playing in the football league alive.

Going into the game, the statistics did not look good for the Cards despite winning at Guiseley last week. That was their first win in nine league games, and only their third in the last twenty four, coming up against a Dover team who have won five of their last ten games, and have a striker in Ryan Bird who has 16 league goals this season. However, this is the last game of the season, all to play for, everything on the line, nothing is set in stone.

It was a lively start from both teams, as you would probably expect. Woking created a number of chances, including a well worked corner cleared off the line and they came up against a resilient keeper in Mitch Walker who has the most clean sheets in the National League this season. However, it was the Whites who took the lead in the seventeenth minute via a towering header from their centre half Giancarlo Gallifuoco, after Mitchell Pinnock whipped in a good inswinging corner. Advantage Dover.

Woking responded well to going down. It was clear their tactics were to expose the the Whites defense with their lack of pace by knocking balls in behind and with just five minutes to go before half time they got their deserved equalizer through this method. A threaded pass played in behind for Reece Grego-Cox to chase, arriving ahead of the keeper he played a cute pass into the box, where Cards top scorer Charlie Carter kept his cool and with one touch, buried it in the back of the net. All square.

What followed was a five minute bombardment from the home side, forcing Walker into a couple of excellent, close range saves. Carter also came within a whisker away of doubling his, and Woking’s tally, but he could only find the underside of the bar after a short corner.

Half time and it’s one all – a draw not enough for either team in their personal pursuits.

With this in mind it would have been presumed that both teams would come out in the second half and give it their all; but this was not the case. The second half was very flat, neither team could build on any momentum. As the half entered into its latter stages, news filtered through the stadium that Barrow were losing. The Cards knew they only needed one goal to secure safety, so they pushed more men forward, but they never really came close to getting that all important second.

This did mean that a lot of gaps appeared in their defense and Dover recognized that, with Pinnock having the clearest of chances to retake the lead, only to be denied by a great last ditched block. The second goal did come in the end though, the ninety second minute in fact, as Keanu Marsh-Brown was found inside the box drilling his shot hard and low to score his third goal in three games against Woking, but more importantly to give the visitors all three points.

Defeat meant that Woking were relegated to the National League South – a real shock considering they were third in the National League fifteen games into the season. It was disappointment all around the Kingfield Stadium because despite grabbing the late winner Dover failed to reach that illusive playoff place, as other results did not go their way and they missed out on goal difference.

It was a sucker punch for the Whites but overall I believe their players should be proud of the performances they have put in this season, especially because they only had six players at their first pre-season training session.

Hold your heads high Dover fans – there’s plenty to work with for next season.