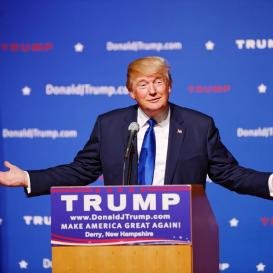 If you’re outside the US looking in on the 2016 presidential race and wondering, “What explains the rise of Donald Trump?” you’re not alone — and you’re not only in the company of people who don’t live in America.

Many of us who live on the US coasts, where the country’s biggest cities are concentrated, are asking the same question. And guess what? That’s where many US journalists live, which, unfortunately, helps explain the problem you might be having navigating this election cycle.

Part of it boils down to geography, which has created a two-headed monster. Press coverage of the 2016 election is suffering from a culture gap, and, due to the nature of Trump’s campaign, reporters can’t fall back on conventional political wisdom to make up for a lack of true understanding of the voters. And the media’s fascination with the Trump phenomenon and his tactics as an unconventional candidate leads to gawking — rather than more substantive — coverage.

This is the election year that has journalists eating their words — literally. When Trump declared his candidacy nearly a year ago, he was written off by most of the political press. At first, the Huffington Post famously refused to cover him in its politics section, instead putting him in the entertainment section, “next to our stories on the Kardashians and [the reality TV show] The Bachelorette.”

Even revered data journalist Nate Silver of the renowned data site FiveThirtyEight explained away Trump’s lead in the polls.

The quick dismissal of Trump in the media which, to be fair, wasn’t unanimous, highlights America’s cultural divide. The higher concentration of journalists on the coasts generally means that media coverage is saturated with work by people who fled a region whose values and problems they wanted to leave behind, or people who were never exposed to people with those values and problems in the first place.

Unfortunately for the media, and anyone who’s not a Trump voter but is genuinely seeking to understand his popularity, the gap people between this swath of voters and the people tasked with covering them proved to be too wide.

This is a gap I’m sensitive to and am a living example of, having grown up in the Midwestern town of Kansas City, Missouri — a place I left to pursue my journalism education, despite the fact that Missouri has one of America’s best journalism schools. Since college, I’ve worked my entire career in Los Angeles or New York.

Shortly after Trump became the last man standing in the Republican primary race, Jim Rutenberg of The New York Times wrote a piece that took data journalism to task for its 2016 coverage. I don’t agree with that part of Rutenberg’s assessment — which prompted a response from FiveThirtyEight’s Silver — but I am with him on his basic premise: that this election cycle needs more on-the-ground reporting.

Rutenberg argues this might have helped journalists get their primary predictions right. Perhaps. But to me, this would help mitigate the second of those two heads I refer to above: the fascination factor.

“Political data journalism is often most useful when it avoids making predictions.” https://t.co/wYxlXblOja

I’ve heard the story of the white voter down on his luck thanks to the recession and feels Washington hasn’t done enough to fix it. There are the people who like Trump because he’s an outsider who speaks his mind, doesn’t bother with “political correctness.” Then there’s the tie of authoritarianism and the talk of the undertones of the Republican Party.

But much of the coverage of Trump supporters feels very “ooooh, look at the crazies over there!” It doesn’t feel nuanced, and it hasn’t offered me a complete portrait of not only who these voters are but the issues and problems that drive them. (For an exception, see this piece in The New Yorker.)

Even now, amid many media mea culpas for previous Trump coverage and predictions, if I turn on cable news — one of the main sources of election updates for many Americans — I’m bound to see a story about the latest Trump drama that tells me nothing about his policies or his understanding of the important questions facing our world. And I’ll see this same drama discussed three or four times a day.

This is not to say that a lot of past political coverage hasn’t been focused on gaffes, spats or personalities, or that the character of a presidential candidate isn’t important. And I haven’t ignored some journalists’ efforts to pin down Trump on important policy questions.

But I can’t help but think that dismissal of Trump has turned to fascination, and that is what drives a lot of coverage. I believe this fascination is the result of genuine curiosity, but it leads to questions that wouldn’t need to be asked by people with real understanding of the voters’ values and problems.

How the media failed in covering Donald Trump. Analysis from @davidfolkenflik. https://t.co/0OFZ4uyIev pic.twitter.com/Eg559BqZgd

It’s this lack of understanding that I see as a common thread in 2016 election coverage. For me, Trump’s candidacy is showing how out of whack the power balance is in this country — how concentrated and similar the people who control media and politics are.

Unfortunately, the problem is so entrenched in our culture, values and geography that I’m not sure if or how we’re going to solve it. I don’t plan to move back to the Midwest anytime soon.

I’m certainly not the first person to point out the urban-rural divide that defines cultures worldwide, so I hope that young journalists’ acknowledgement of this reality — with the 2016 campaign being a case study — is the first step toward better media coverage in the future.