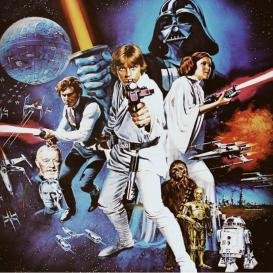 Star Wars is more than just six films. It is a multi-billion-dollar expanded universe of books, comics, TV series and video games. Its characters and dialogue, even to those who have not seen the films, are immediately recognisable to virtually anyone. The movies have influenced pretty much every science fiction film that followed them, inspired more gritty, lived-in science-fiction, and pretty much invented the modern blockbuster and its penchant for spectacle. It has inspired countless homages, parodies and even an official religion. Its most obsessive fans eat, breathe and live Star Wars. In short, it is not just a media franchise, but an integral part of the fabric of Western popular culture. In light of this, it’s hard to believe that it was at one point a low-budget independent passion project of one of the movie brats.

How then do you decipher the success of Star Wars? When you think about it, it’s a very unusual film to have been made in the 1970s. Films of the 70s are often characterised by cynicism and moral ambiguity. Think Taxi Driver or Straw Dogs. The disillusioned hero doesn’t win and gives up on fighting, as maybe there’s nothing really worth fighting for. The malaise of 70s cinema makes perfect sense when you consider the socio-political backdrop of the United States at the time. The innocence of 1960s peace and love was tarnished by the assassinations of Kennedy and Dr. King, as well as the political failures of Vietnam and Watergate. The world was in an economic downturn due to the OPEC embargo. Then out of nowhere bursts this film Star Wars, a story of a good-hearted but ill-equipped farm boy who takes on the evil, monolithic Galactic Empire. It’s a simple story about good vs. evil, and guess what? Good wins. The Star Wars phenomenon makes more sense when you realise how much of a breath of fresh air it was.

Before Star Wars, science fiction films were only really made for adults. If you look at the successful sci-fi titles of the 70s, such as Logan’s Run, The Omega Man and Soylent Green, you notice that they are all bleak action-dramas about post-apocalyptic visions of the future. But science-fiction was never always so cheerless, but previous sci-fi films were the sort of thrown-together b-movie kitsch they made fun of on Mystery Science Theatre 3000, with hysterical titles like Fire Maidens from Outer Space and Invasion of the Saucer Men. But even before the advent of television, when films were the only form of broadcast entertainment, science fiction stories proved popular in the film serials of the 20s and 40s. These were the serialised 10-20 minute long episodes of a continuing story that would often be shown before a feature-length film. They were cheep, campy and exciting. This is the true heritage of Star Wars. George Lucas originally wanted to make a film of Flash Gordon, a sci-fi adventure serial he’d loved when he was a child. He couldn’t obtain the rights, so instead decided to make his own adventure serial, borrowing heavily from the ideas and spirit of Flash Gordon and Buck Rodgers. This is why the films are split into ‘episodes’, and why each film starts with a cheekily expositional opening crawl of text. The concept of a universe teeming with life, including many more technologically advanced than our own, and images of evil emperors and cloud cities were borrowed from these serials, in contrast with the dystopian view of the future in the science fiction of the time. Star Wars was different to everything else by light-years, and people went crazy for it.

Star Wars may have been popular due to it being in the right time at the right place, but why does it still endure today? The original trilogy are regarded as classics that still hold up completely. The reason for this is simple; it is just good, classic storytelling. George Lucas was interested in the writings of mythologist Joseph Campbell, who wrote in his book The Hero with a Thousand Faces about the monomyth or hero’s journey, a common template in myths and folktales. In the monomyth, a hero goes on an adventure, faces adversity, and learns something from the experience. There are seventeen stages and various archetypal characters, including a hero, a wise old mentor, an evil figure with the potential to be good, and loyal companions with a friendly beast. Sound familiar? This archetype can be found everywhere, from Homer’s Odyssey, to The Epic of Gilgamesh, to The Lord of the Rings. It’s a story that’s immortal because it works, and Star Wars sticks to it to the letter. Star Wars also takes elements and iconography from other classic works of fiction. The Empire is straight out of a World War II movie. Tatooine derives from the American western. The Jedi Knights are based on the knights of Arthurian legend. Lucas borrows from and mashes up familiar, classic stories, and uses them to create his own great piece of storytelling.

I haven’t even mentioned the special effects or John Williams’ score yet. Star Wars is a movie that revived all the popular high notes that had long been out of fashion. It is a good old-fashioned tale that knows how to please an audience, where heroes overcome adversity despite the odds (though of course, you should never tell anyone the odds). It is a modern legend, a story that will endure forever because it understands what makes stories endure forever.

Are you a fan of Star Wars? Let us know in the comments below!