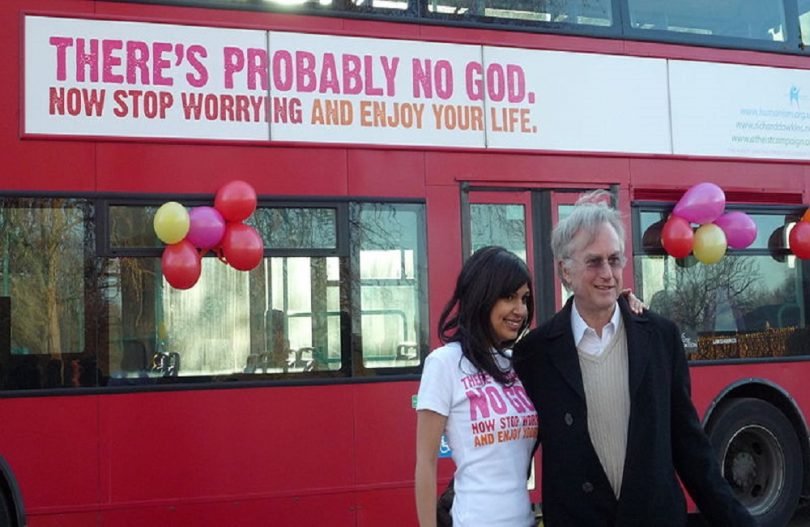 Having never gone to a particularly strict or religious school, I’d never thought of myself as being thrust under the bus of Christianity. I’d never felt forced to think about Jesus or consider the existence of Heaven and the underlying messages resting underneath the Ten Commandments. If anything, I saw it all rather broadly as choice. Studying Catholicism was not only a conscious decision, but a pleasurable alternative to the heavy weight of unendurable physics lessons.

But as I look back on my school years as a fully formed atheist at university, there was something quite hard to swallow about the Christian tradition of R.S lessons and after school services. Something quite worrying about the standardised syllabuses and GCSE exam questions. It was the suggestion that religion was the norm and anything else was for or against it.

The subtle acceptance that there was a God. That if we wanted to question this God then we could, but only so far as we observed it, rebuked it and challenged it in the context of assuming that there was one.

We could only discuss the big bang as a theory against the existence of God, not as the primary principle of truth or scientific understanding of life. Lessons would revolve around teaching the Cristian bible, the Quran or the Torah and then observing arguments that go against it. There was no starting point with atheism. There was no class for atheism. It was and still is an obstacle that must be dealt with and then moved aside. But why?

Many people might argue that you can’t teach atheism because it involves only the undoing, not the instatement of ideology.  That is to say, there is nothing to teach. But I’m not so sure this is completely accurate. Why couldn’t atheism be the theory, and religion its undoing?  Rather than making atheist students feel like their ‘belief’ system is the counter argument, couldn’t we make it the argument?

According to a census taken in 2015 only 48.5 % of the UK population identified themselves as atheist or as having no religion and a poll taken in 2015 ranked the United Kingdom as the sixth least religious country in the world. These figures are both un-surprising yet a staggering realisation when you consider the fact that a third of all public school are still religious in their denomination. Furthermore, only 7.4 % of families attend church services habitually on a Sunday, even as UK law continues to make it mandatory for all children below the age of 16 to be taught about religion in accordance with a central syllabus.

Ultimately, what these facts show is that atheism is not being taught properly in schools. It is not being given the respect it deserves and it is not helping children who need to understand their own belief system. Teaching atheism for an hour a year on the back of another topic is not giving pupils the understanding they need in today’s secular society.

Surely it’s time that atheism pertains the license to teach pupils about science and nature through its own lens?

Every time children learn the atheistic view points against the Ten Commandments or love thy neighbour as yourself, they are being taught about a moral code for living that they don’t necessarily agree with, or understand. I remember being taught about atheistic theories like the Inconsistent Triad and the existence of evil not as a subject in itself, but only in the context of proving Him, with messages of love and grace from the New Testament.

Whilst there’s no denying that the Bible does pin point important workings of our culture, there’s no denying also that as an atheist, views on marriage, death and contraception may differ quite dramatically from the words of Christ. Even just for the fact that you don’t believe Christ said it. So whilst everyone else is gaining spiritual learning to set them alight in their futures, what lessons can the ‘non-believer’ or ‘secular’ child take? Seems only that atheism is an argument against religion, and that it has no value or impact on your life. That you cannot live life as an atheist because there’s nothing to uphold you.

Young children see nothing but the coding of Christianity or religious principles when they are taught about morality.

But arguably, if your teaching atheism, there needs to be a different set of values and codes taught. There needs to be a new and separate system that insures atheistic children, and undecided children have another way of looking at the world and deciding what role they want to play in it.

Having a separate subject for atheism would provide a greater focus on theories like the principle of happiness and situation ethics that urges individuals to follow love above all else. Rather than scrawling the big bang theory into the back of your notebook, you could put it at the front. Just as we learn about God being the prime mover, why not pay equal attention to the other thing that started the universe 4 billion years ago.

Perhaps the most important separation between religion and atheism is the outlook on death. As atheists believe that when you die-you die there is very little correlation to arguments about heaven and eternal salvation.

The truth is schools need to talk about death more openly as many pupils will unfortunately experience the loss of a love one whilst still in school. They might lose a grandparent or even a pet and be left with numerous unanswered questions about life and death in a system failing to cater to their needs.

In reference to the lack of death education at schools Andrew Jones, the head of religious studies at the Goffs School in Chester stated “I do think that death is an extremely difficult subject to deal with socially and schools at both primary and secondary level should not shy away from teaching about it.”

Atheist children need to be given the option to believe in one life, and be taught how to cope with that realisation. Because non-belief might not be the desired outcome but the only viable option available at the time. Teaching them in a safe space about how to live life to the fullest, without a God or book to look up to, might just help them live that little bit better. And maybe even enrich the lives of religious believers too.