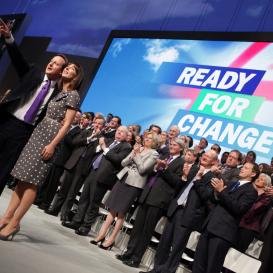 The Tory Party have a problem. Well they have many, but they have one specific problem at the moment. David Cameron, who a recent YouGov survey rated as the least disliked party leader of a generation, will stand down as leader ahead of the 2020 general election which means they need a replacement.

George Osborne has been the bookies favourite to take over from Cameron since the announcement, but here is where the crux of the problem lies, people just don’t like him.

Be it because of the tax credits debacle, be it because of his awkward nature and a general expression of having a ferret accidentally find its way into his underpants or be it because he has the pallor or a creature of the night, the voting population are nowhere near as keen on him as the bookies. In fact, according to a recent survey in the Independent, fewer than one in five would be encouraged to vote Tory if he led the party. So who are the other choices for Tory leader?

What can I say about Boris that hasn’t already been said? He’s famous for getting stuck on a zip wire, being Mayor of London, and his hair, which recently has been received more than a few comparisons with his American sparring partner, Donald Trump. The voting public would apparently be three times more likely to vote Tory if Boris was in charge. But to me he always has an air of wearing yesterdays egg stained tie. And how well would his bumbling buffoon image would go down on the global stage? Although I would quite like to see him shrink under Angela Merkel’s withering gaze…

Previously the Secretary of State for Culture, Media and Sport, he’s currently Secretary of State for Business, Innovation and Skills, which would be a big selling point for business centric Tories, and he has previously been tipped for the job. His election would see the first non-White mainstream political party leader in British politics.

Currently Home Secretary, Theresa May could be the second female Tory leader, and if they won, the second UK female PM. She is also infinitely more popular than Osborne. We’ve already seen her hold her own on the world stage and she can definitely match Angela Merkel in the withering stare department. She stood against George Osborne when he tried to slash the police budget. She’s been the longest running Home Secretary in a century.

The Health Secretary who certainly won’t win the votes of junior doctors, or probably anyone else in the NHS. Deeply unpopular with health care professionals with his current attempts to steam roller through the highly contentious new contract for junior doctors and, his relentless attacks on the NHS for not providing a 24/7 service, despite endless accounts to the contrary, he’s probably more likely to do the party harm than good. But 2020 is 4 years away, so who knows how his fortunes might change in between now and then.

There’s a definite air of Cuthbert Cringeworthy from the Beano’s Bash Street Kids about Mr Rees-Mogg. Son of the late William Rees-Mogg, former editor of The Times, and current MP for North-East Somerset, he currently sits on the more Euro sceptic arm of the party. He was referred to as being a “likeable, if the blithe incarnate of a Tory knob” after his appearance on Have I Got News for You. However, as a Roman Catholic, the prospect of him as PM, may cause too many constitutional wobbles for him to be given the job.

OK so this one’s a bit out there, but why not? The Americans have their political royalty, we’re looking at, potentially, another President Clinton, so why can’t we have another Cameron Prime Minister? The Conservative party is infamous for choosing relatively unheard of candidates, who better than Sam Cam who isn’t even an MP. Admittedly her lack of a Parliamentary seat would create a slight constitutional problem, but I’m sure hubby Dave would let her have his if it meant he could still get his weekly Ocado shop delivered to number 10.

Other current outsiders include: Nigel Farage, Tony Blair (personally I can’t see the British public voting for him in again as PM for any party) and of course, the perennial favourite of outside odds, Elvis.

Who do you think should be the next Conservative leader? Let us know in the comments below!