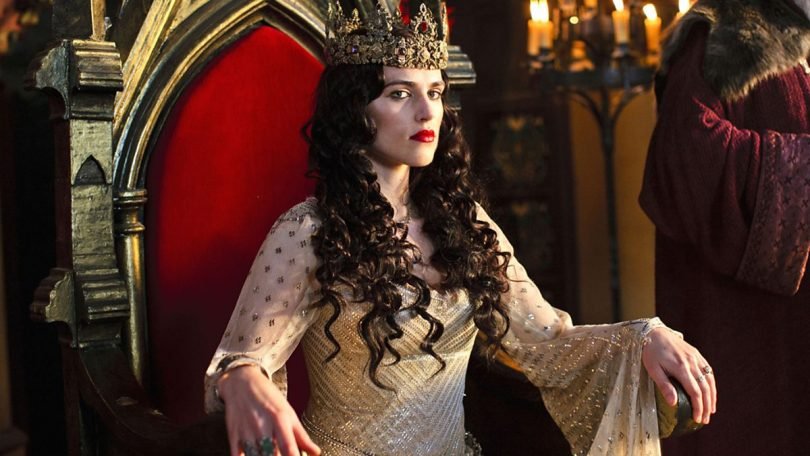 With yet another Halloween around the corner, it can be assured that we’ll see plenty of tiny humans in pointy hats with green faces running around with a broomstick in one hand and a pumpkin bowl full of sweets in the other. They’ll probably be dressed in black or purple, and if their parents are feeling particularly creative we might see the odd eyeliner wart or pair of false crooked teeth too.

Witches have become an integral part of contemporary ‘Halloweening’, and not just because a cardboard hat and green face paint is a more economic costume than dressing children up as Beetlejuice, or the strange T-Rex hybrid from the last Jurassic World film. It is the world of literature which has made these supernatural sorceresses a figure of celebration and entertainment, although this wasn’t always the case.

Halloween can be pinpointed back to a Celtic festival known as Samhain, in which the Celts would light bonfires to ward off ghosts and wear masks as disguises. From there it was metamorphosed into All Saint’s Day by the Catholic Church, later to be named Hallows’ Eve, then Halloween for short. Some of the elements of our Halloween can be found in these contemporaneous celebrations, such as ‘souling’ and ‘guising’ – traditions which date back to Medieval Britain that act as the blue-prints for modern trick-or-treating. The act of ‘guising’ would relate to young people dressing up and seeking reward, whether it be money or food, for reciting poetry, playing music, singing etc., whereas ‘souling’ relates to the impoverished lower-classes begging for soul cakes (the Hallows’ Eve version of Easter hot cross buns), in which they pray in return for dead relatives or the health of the soul cake-givers. Although we see Halloween as this multi-million-dollar American industry, the roots of the celebration were founded in Europe, and travelled across to the US with the Scottish and Irish settlers. 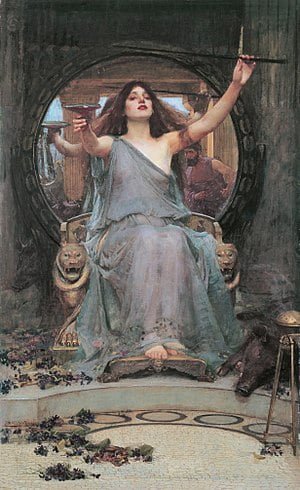 So essentially, Halloween has been around for over 2,000 years, and as the film/TV industry didn’t really begin until 1890, civilisation couldn’t rely on the latest Tim Burton masterpiece to make them fear all things that go bump in the night. It was folklore and literature which gave our ancestors the heebie-jeebies, in particular stories which pertained to ghosts or devilish women.

Despite the modern perception we have of witches – the hooked-nose, pimpled skin, terribly tangled hair archetype springs to mind – witches were beautiful, sensual beings back in Ancient Greece and Rome, with the ability to seduce the most honourable of heroes. They were physically depicted as such in art too, for example J. W. Waterhouse’s ‘Circe Offering the Cup to Ulysses’.

Within Homer’s Odyssey, Odysseus comes across a beautiful witch called Circe, who has a penchant for turning people into animals. She quickly metamorphoses Odysseus’s men into pigs and sets to work enticing Odysseus into her bed. Odysseus is wise to her charms thanks to the interception of Hermes, but according to the later piece of Greek literature, Hesiod’s Theogony, Odysseus still had a roll around in the sheets with her, and not even as a drunken one off – according to the work she bore him three sons. He might have wished he kept those lustful urges to himself though, as Telegonus (his son by Circe) later killed him by unwittingly giving him a poisoned spear.

Another fantastic witch the ancient Greeks gave us is Hecate, who, unlike most witches, was celebrated. She was portrayed as a great goddess, who accumulated quite a following, particularly in Thrace. Hecate is credited with mentoring Circe, and was later to inspire one of the character’s in Shakespeare’s Macbeth as the protector of witches.

However, regardless of the celebration of Hecate or the sensual allure of Circe, women were still persecuted outside of literature for heresy and witchcraft, particularly as we move from the classical period to the Middle Ages. The Inquisition movement by the Roman Catholic Church to stamp out witchcraft began in 1230. Witchcraft is one of those debatable elements when it comes to Christianity, but the general consensus was that St. Augustine’s ideologies were true: magic was invented by the Devil to turn people away from God. And so a persecution began which wouldn’t end for centuries, and the glamour of the Greek goddesses of magic churned into the image of naked women with long flowing hair – women without modesty, essentially. The church wanted these women to become targets of hatred and repugnance, and thus the image of old haggard crones with a predilection for eating children and indulging in bestiality emerged. Of course not many of those accused fit this image, but that didn’t matter – there was no one way to be a witch, but hardly any ways to prove innocence.

It wasn’t until the 1700s when English literature altered the depictions of witches once again, although the new archetypes were still firmly rooted in the Middle Ages. During fourteenth century Hungary, those accused of witchcraft were forced to wear the ‘Jew’s hat’, which bears a striking resemblance to all of those pointy black hats we’ll see this Halloween. It was in the eighteenth century in children’s books in which this image occurred, but it isn’t a proven fact that these hats were intended to be anti-semitic. However, both the persecution of the Jews and witches during the Medieval-Renaissance periods do run parallel for the most part, and therefore it is plausible that the eighteenth century image of witches was purposefully likened to the plight of the Jews.

In fact, English literature has one of the most interesting relationships with witches. Perhaps the most notorious is Morgana le Fay, who strikes a strong resemblance to Greece’s Circe, with respect to her wantonness and famed beauty. As with Circe, she had tricks to seduce the men she desired, even going as far as disguising herself as Guinevere to deceive Arthur into bedding her. As a stark contrast we have Shakespeare’s Weird Sisters in his tragedy Macbeth, who are described as ‘withered and wild in their attire’ – in other words the haggard crones we know from Medieval literature. The persecution of witches still occurred during Shakespeare’s day, however attitudes soon began to alter. There was a peak in trails during the seventeenth century, especially with the Salem Witch Trails that rocked Massachusetts from 1692-93, but in 1735 the Witchcraft Act was passed which made it illegal for a person to claim anyone was a witch in Great Britain, and the last person to be executed for witchcraft in the UK was Janet Horne in 1727. As a result of these changing attitudes, witches in literature began to develop, not just in Britain, but across Europe too. 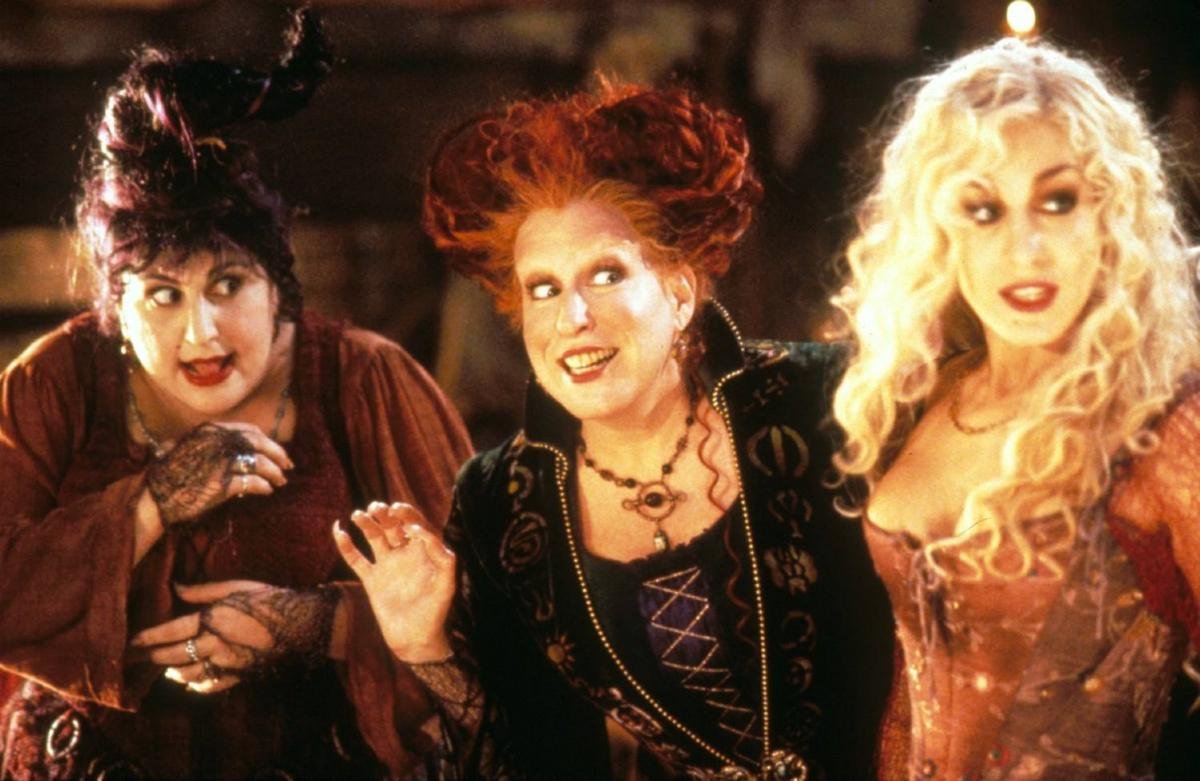 The influence of the Grimm Brothers’ fairy tales gave us some of the most iconic witches within the literary canon, such as the villains in Hansel and Gretel, Snow White, and Rapunzel, who we mostly know today from Disney adaptations. With Snow White, the Evil Queen is notoriously attractive, seeking vengeance upon the one person who can challenge her beauty. Therefore, the Evil Queen deviates from the Medieval image which had become commonplace, as did John Keats’ ballad, ‘La Belle Dame Sans Merci’, in which a Knight falls in love with a beautiful witch, before his love descends into a nightmare. Once again literature was fascinated with the allure of a sensual witch, as opposed to the nightmarish terror of a withered one.

It wasn’t until the ‘The Wizard of Oz’ film in 1939 that witches became notorious for having green faces. By all accounts, the studio’s decision to have the Wicked Witch of the West’s skin tone resemble the colour of a cartoon cactus wasn’t founded upon a meaningful connection to the story, but because the green was particularly striking in Technicolour. From this point on we have witches falling in various places on the Classical Greek witch to demonised Medieval witch spectrum, with some great cult classics being born from humanity’s obsession with sorceresses. Disney’s ‘Hocus Pocus’, Terry Pratchett’s Wyrd Sisters, BBC’s rebooted ‘Merlin’, and J. K.  Rowling’s Harry Potter franchise are but a few modern-day adaptations which are once again transforming the ways in which we look at the occultist figures.

In short, witches are more than a cheap costume for kids each 31st of October, but an element of western culture that has developed over centuries of scape-goating and persecution. Literature has played a pivotal role in documenting these changing attitudes, and as a result has given us some of the best literary characters to date. So if you’re going to a party as a witch or you know a child who wishes to don the pointed hat, maybe try out one of literature’s infamous enchantresses, after all, they've played a greater part in history than we think.