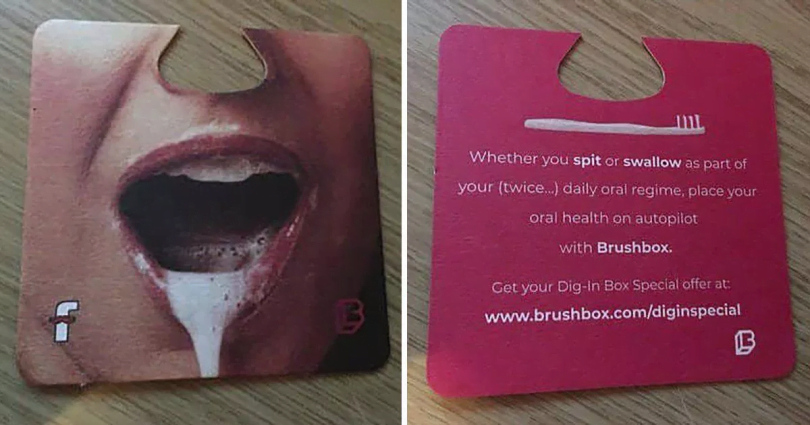 The University of Sussex has received backlash after handing out beer mats to freshers, which have been labelled as sexist for the way in which they sexualise the female body.

The beer mats in question depict a female mouth spitting out toothpaste with the quote, “Whether you spit or swallow as part of your (twice…) daily oral regime, place your oral health on autopilot with Brushbox.”

The question that’s on my mind is: why? First, why was there the need to sexualise the act of brushing one’s teeth? And why was it deemed appropriate to aim this at young people in particular? Maybe it is due to the preconceived notion that all young people are obsessed with sex, for why else would anyone go to university? Surely not to get a quality education.

Who were these senseless beer mats aimed at? Because it surely wasn’t young women. While young men may find this amusing, young women are expected to hide their embarrassment or discomfort.

These beer mats were given to young people in a stressful and challenging time in their life. Most were leaving their family home for the first time and trying to adjust to a completely different environment, whilst living with total strangers. And, one of the first things they are presented with is this beer mat, depicting what could be seen as a sexual act.

The fact of the matter is, sexual assaults are increasingly president at university. Figures released by the campaign group Revolt Sexual Assault show that 70% of female students or graduates experienced sexual violence at university.

Even if this wasn’t the case, these beer mats would still be inappropriate. But with 70% of females and 62% of all students experiencing sexual violence during their time at university, this advertising gimmick only contributes to the way society views women.

Unfair representation of women in the advertising industry

This isn’t the first, and probably won’t be the last time the female body has been used to sell a product. The advertising and marketing world has a blatant problem with how they see women. Or rather, how they use women. Everything from sandwiches, beer, cars, and now oral hygiene has to fit the male gaze. They either sexualise women when they aren’t the target market, or mock them when they are.

These two advertisements are shocking in the way they present women. They either use women as merely sex objects to draw a male’s attention, or reduce women to the stereotype that they are dependent on men; a boyfriend is the end goal. While only one seems obviously targeted at men, both still have men at the centre.