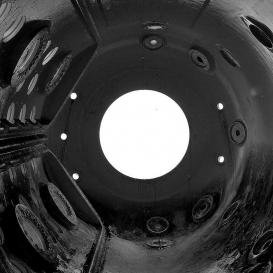 The Large Hadron Collider, CERN’s 27-kilometre-long particle smasher situated under the Swiss/French border, has been undergoing a maintenance period since February 2013.

Nearly three years on from detecting the Higgs boson, simultaneously explaining why we have mass and making physicists around the world momentarily feel like rock stars, the Large Hadron Collider is close to being restarted.

Having already made its big discovery, what is there left to find, and what else can we expect to come out from beneath the streets of Geneva? 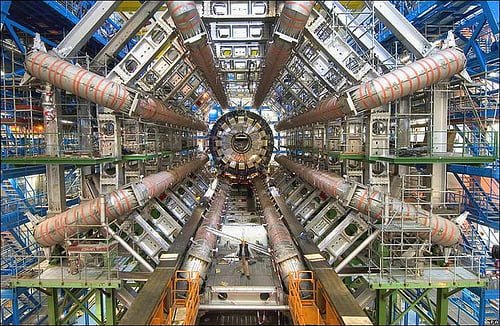 Doesn’t sound like much? That’s the energy per proton.

When smashing, the LHC fires two beams of protons at each other with each beam containing around 3×1014 protons. Meaning a total beam energy of 3.58×108J or 413 Kitkats!

Now that the accelerator has been upgraded, the protons each carry an energy of 13TeV, meaning more Kitkats and harder collisions.

As everyone’s favourite formula, E=mc2, states: energy and mass are transferable, so the increase in collision energy means heavier particles can be produced more easily.

The return of the Higgs

Weighing in at 126GeV, the Higgs itself is quite a hefty particle. Increasing the energy of the collisions increases the likelihood of detecting the Higgs boson, allowing particle physicists to gain further insight into how it differs from predictions and how it decays.

It is predicted that there are particles in existence, so called ‘dark sector’ particles, that don’t interact through the electromagnetic force and so can’t be detected. If these particles still have mass, however, it could be possible for them to be detected via interactions with a Higgs boson.

One of the major mysteries of the universe is why the amount of matter present is much greater than that of antimatter when at the Big Bang they must have been created in equal quantities.

Antimatter is a set of sister particles to those of regular matter. Each particle is paired with an antiparticle that has equal mass but opposite charge, for example the electron has the positron as its antiparticle pair, and the proton has the (slightly less originally named) antiproton.

When a particle and an antiparticle meet, they annihilate – the two particles are destroyed and leave behind their equivalent mass in the form of a photon of energy. This energy can then spontaneously produce another particle/antiparticle pair. The point being, matter and antimatter should be created and destroyed in equal proportions. Where’s all the antimatter gone?

Again, increasing the collision energy makes antiparticles easier to produce, allowing physicists to examine properties of antimatter that might explain this conundrum.

Evidence for other dimensions

Of all the fundamental forces, gravity is by far the weakest.

If you think about it, even though it’s gravity that’s currently locking you onto planet Earth, even you, little you, can momentarily break away from the gravitational force from a planet with 1023 times greater mass than you just by jumping. That’s quite weak, don’t you think?

One explanation for this is that gravity spreads out into other dimensions, ones that our three dimensional minds can’t even imagine. To test for this, it might be possible to detect particles that require other dimensions in order to exist.

In the same way that atoms have a ground state and can move to more energetic, heavier states, some theories predict that there are heavier versions of particles hidden in other dimensions. Using more energy could lead to the discovery of these heavier particles and prove the existence of more dimensions.

Dark matter is the proposed solution to an apparent lack of matter in the universe. Astrophysicists can view the gravitational effects at work in a galaxy and calculate the mass required for that to occur. When adding up how much matter they can see however, there’s a massive discrepancy – an 85% discrepancy. Dark matter is what is proposed to make up that mass gap; it is matter that mustn’t emit light or any other radiation as it can’t be seen and is so dark in fact that it hasn’t yet been detected.

One theory is that dark matter consists of ‘super symmetric’ particles. Super symmetry is an extension to the standard model – the set of fundamental particles that form the building blocks of matter – that should explain some of the questions that the standard model has left unanswered. Increasing the energy of the proton collisions could lead to these particles being sighted.

In conclusion, Higgs was just the start. CERN still have much more exciting work to be done.