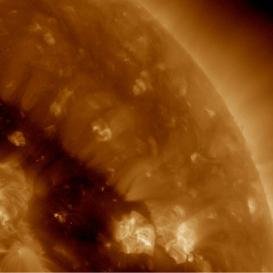 After the discovery of Earth’s twin planet last summer, planet hunting astronomers have now found a potential ‘Venus twin’. The newly discovered planet, called GJ 1132b, lies 39 light-years away and is the nearest Earth-size exoplanet to be found so far. The discovery is significant for a number of reasons. In particular, it could be one of the first Earth-like exoplanets to be examined by the next generation of telescopes.

Venus’ Not Quite Identical Twin

There’s a lot of reasons why GJ 1132b has been dubbed a ‘Venus twin’, rather than an ‘Earth twin’.

The newly discovered world is not dissimilar in size to Earth and Venus too. GJ 1132b has a diameter of about 14,800km, whilst Earth and Venus are 12,700km and 12,100km wide respectively.

GJ 1132b could also be relatively cool enough to maintain an atmosphere; similar to the one found on Venus. This could be a particularly important finding if true. As Zachory Berta-Thompson, lead author of the paper announcing the discovery, stated:

“If we find this pretty hot planet has managed to hang onto its atmosphere over the billions of years it’s been around, that bodes well for the long-term goal of studying cooler planets that could have life”.

However, there are some noticeable differences between the so-called twins. For instance, GJ 1132b orbits a red dwarf star that is only 21 percent the size of the sun. It also emits only one-half a percent as much light.

Venus 2.0 is a stone’s throw away in astronomical terms; only 39 light-years (370 trillion km) from our sun. In comparison, Earth’s twin Kepler-452b, found this July, is a staggering 1,400 light-years away from us.

The closeness of Venus’ twin has astronomers excited. This is because the planet is close enough for its atmosphere (if it has one at all) to be analysed in detail by the next generation of telescopes that are currently in development.

Usually, only very big worlds are available for this kind of study and signatures from smaller worlds cannot be detected. This occurs because the parent star is often so big and bright that its glare overwhelms the signatures of smaller worlds. Consequently, we can only find information about the atmosphere of really large planets, which isn’t too interesting as they often do not have the conditions needed for life.

It’s a different story however with GJ 1132b. Its nearness to us, as well as the dimness and small size of its parent star, means it atmosphere will be able to be examined by new telescope for signs of an atmosphere and maybe even life.

The Hunt for Alien Life

Truthfully, Venus’ twin is an unlikely candidate for alien life. As highlighted before, the planet is extremely hot and is being “oven roasted” due to its close orbit to its parent star. As a result, any water on the planet would have boiled away- making the possibility of life unlikely.

However, even if Venus’ twin does not have alien life, it can prove useful as a test for future observations of planets that are blessed with better conditions.