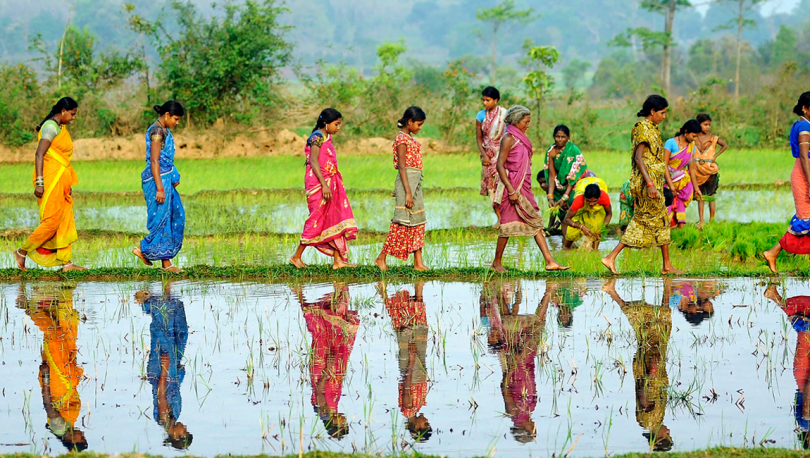 We can all safely say that 2017 was a great year for the gender equality movement. From the beginning to the end of the year we saw grassroots organization of protests and campaigns against gender-based injustices making headlines. What was left unreported, however, were the initiatives started by rural women and their organizations, mainly in undeveloped countries. This leads me to ask a question — are we, Western feminists, forgetting about our fellow women outside of Europe and the United States?

January 21st was the date chosen for the Women’s March on Washington. Just a day after Donald Trump was sworn into office, almost half a million people gathered to peacefully protest the new administration. Similar marches took place all over the United States and in all continents (yes, in Antartica too!). The most impressive thing about these marches, in my opinion, is that they were all started by citizens who saw something they found unfair happening them and took action. It went to show that the spirit to vote, protest, and be a part of the active political life is not as dead as one might think.

Nine months later in October, the social media movement using the hashtag #MeToo blew up the internet. Created in 2006 to support victims of sexual assault, it went viral after rape and harassment allegations were made against film mogul Harvey Weinstein. It didn’t take long until women of all backgrounds were using the hashtag to share their abuse stories with the world. This initiative propagated like wildfire through Facebook and Twitter didn’t show just how common and normalized sexual assault is, but also that social media can bring about change. We had already witnessed this with the Arab Spring, but we got a whole new glimpse of it that didn’t stay confined to just one region of the globe.

But what can we say about initiatives that focus on women from undeveloped countries? While #MeToo, Time’s Up and the Women’s March on Washington took over our screens and feeds, we cannot say the same about campaigns and rallies in the non-Western world.

In August, after intense protests led by women, Chile’s Constitutional Tribunal voted to make abortion legal under three cases. This was an important step for a country where abortion used to be completely forbidden In the Democratic Republic of Congo, women’s rights groups achieved the unthinkable: to include women in the talks for a peace treaty to end violence in the war-torn country. Women make up now 20% of the members at the table, which wouldn’t have been made possible if not for the Congolese Women’s Forum. In Mexico, after one of the strongest earthquakes in the country’s recorded history hit leaving behind a trail of destruction, female grassroots movements helped relief the catastrophe’s effect on rural communities. Focusing on women’s and girls’ needs, the rebuilding process would have been much slower if it hadn’t been for them.

With all of these examples of women taking action to better their communities, it’s no wonder that 2017 has been hailed as one of the best and most promising years for gender equality. But why have we only been bombarded with speeches from the Women’s March and galas only open to celebrities? We can all remember Meryl Streep’s speech at the Oscars, but why didn’t we hear about these news from the DRC?

The Commission on the Status of Women is gathering in New York in the month of March. At the core of this gathering are the “challenges and opportunities in achieving gender equality and the empowerment of rural women and girls.” The rural women and girls the Commission mentions play an incredibly important role in keeping society together as we know it. They are primary energy managers in their household and play an important part in the world food production. Despite their undeniable importance, the gender wage gap between rural men and women can be as high as 40% — much higher than what women in the West face. In addition to this, in countries where water isn’t just the flick of a tap away, girls and women are the ones stuck collecting this necessary resource. Rural women are much more likely to suffer from malnutrition, anaemia, and to have less access to schooling.

The organization of this convention clearly had this one thing in mind: how come we have taken so many steps forward when it comes to Western women’s rights, yet the issues rural women from underdeveloped countries barely get any attention in the news cycle? After all, this is one of the biggest critiques made against feminist movements in Europe and America — that while they claim to stand up for women, little to no thought is given to women from completely different upbringings.

As UN Women Executive Director Phumzile Mlambo-Ngcuka said, “At the heart of leaving no one behind, is leaving no one out. One of the single most impactful contributions to achieving the 2030 Agenda would be to level inequalities for women and girls in rural areas. Significant progress for them is progress for the whole Agenda, and for the world.”

Feminism is, at the end of the day, the fight for gender equality. This definition encompasses every girl and woman in the world, regardless of class, ethnicity, religious beliefs and country of birth. How can we, self-proclaimed feminists, call ourselves that if we disregard non-Western women’s narratives and the struggles they must endure? A feminist movement that doesn’t include and try to protect every woman is not a step towards equality, but rather just another system of oppression and discrimination.