“The end of the fashion world as we know it,” could be approaching, according to Science Daily.

“The end of the fashion world as we know it,” could be approaching, according to Science Daily. They’re not being melodramatic about a lack of Louboutins, they are referring to ‘Ava’ an avatar created by researchers at Manchester Metropolitan University, which could soon be hitting the catwalks.

Ava was originally created to record motion of ballet dancers for “performance analysis and corrective coaching” yet now is branching out into sports, performing arts, and most notably fashion.

Dr Andrew Brownridge and Dr Peter Twigg have created almost perfect, humanoid, models, which can be digitally dressed and mimic movements of real-life models, to instantly appear on the catwalks of London, New York and Paris.

The researchers used motion-capture technology, often seen in high-budget movies, and 3D body scanners traditionally used to achieve perfect measurements in the fashion industry. Although in the past, holograms have been used to appear like supermodels, such as Kate Moss.

These have often been unsuccessful, but Ava tells a different story. Dr Brownridge said: “Motion capture for fashion shows has been attempted, but the results were very blocky avatars with unnatural movements. But these are very realistic avatars.”

The real kicker is this, the avatar known as “Ava” will create a uniform size 10 model – which all brands can be fitted on. Widely this has been heralded as a positive move towards greater sizing standards – yet in an industry already dangerously disconnected from reality, could a virtual model be even more dangerous?

In a world already dangerously disconnected from reality, is Ava, a positive step towards ‘healthy’ sizing – or a further freakish disconnection from reality.

There’s a basic process to making ‘Ava.’ In the first-step body scanners often used in Hollywood, or for extremely accurate measurements in fashion, capture the motion of a human body.

The second step involves ‘infrared depth sensing technology’ to create a 3D virtual avatar. This is so accurate it prints a picture of the models skeleton, and a UV map of the model’s face. The third magic step creates the animation of the model. 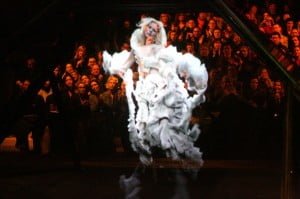 A positive move for the industry?

Because of the authenticity of the avatar, the movements of the model are very realistic and create “near-faultless copies of people” that can be instantly dressed. The next step for Ava is to speed up the process, to make Ava almost instantaneous in order to rapidly dress the models and enable live performances across the globe.

While size 10 is seen as a healthy and normal weight for women in the UK, the “average size” is 16. Debenhams were the first fashion store to introduce size 16 mannequins last year.

So, perhaps a uniform size 10 model will be seen as a positive move towards healthy sizing, despite being much smaller than the average British woman.