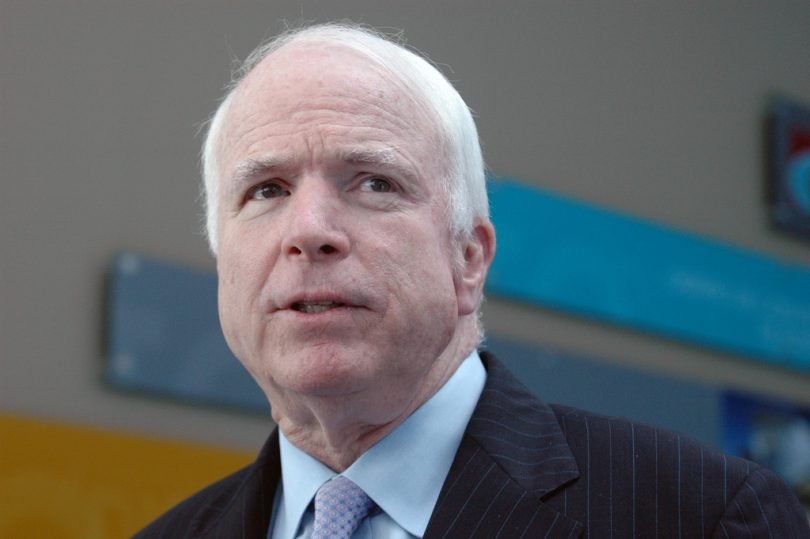 John McCain, the renowned Vietnam war veteran and two-time contender for the US presidency, passed away on Saturday 25th August in Arizona at the age of 81.

The Republican congressman and senator from Arizona died surrounded by his family at 4:28p.m. local time after a long battle with cancer, according to a statement from his office. In July 2017, he was diagnosed with a deadly brain tumour, called glioblastoma, and had been undergoing radiation and chemotherapy treatment ever since the diagnosis.

McCain served as a Navy lieutenant commander during the Vietnam war and became the face of patriotism as the most famous prisoner of the war. Tortured incessantly during his capture for two years, after his plane was shot down over Hanoi, he broke both his arms and shattered a leg, leaving him with life-long disabilities. During his imprisonment he attempted to commit suicide twice. However, he refused an early release to prevent him from being used as enemy propaganda and to maintain the morale of the rest of his captured comrades.

Despite the fact that he was eventually defeated by the torture and signed a “confession”, he was honoured as a war hero; he became the forerunner of courage and the American fighting spirit. The nation has been grieving his loss since his death was announced with many people paying tributes to late congressman. People rushed to the streets with waving flags when a hearse brought McCain’s body from his ranch in Sedona, Arizona, to a funeral home in Phoenix.

News of McCain’s passing also led to an outpouring from other politicians. The President of the United States, Donald Trump posted a message on his Twitter saying: “My deepest sympathies and respect go out to the family of Senator John McCain. Our hearts and prayers are with you!”.

My deepest sympathies and respect go out to the family of Senator John McCain. Our hearts and prayers are with you!

His widower, Cindy has also tweeted a heartfelt message to her husband following the tragedy saying that “My heart is broken. I am so lucky to have lived the adventure of loving this incredible man for 38 years. He passed the way he lived, on his own terms, surrounded by the people he loved, in the place he loved best”.

My heart is broken. I am so lucky to have lived the adventure of loving this incredible man for 38 years. He passed the way he lived, on his own terms, surrounded by the people he loved, in the the place he loved best.

Additionally, he has been described as “a patriot of the highest order” by former President George W Bush, who further stated that “he was a public servant in the finest traditions of our country. And to me, he was a friend whom I’ll deeply miss.”

Sarah Palin, the running mate during McCain’s presidential campaign in 2008, commented that the world had lost “an American original”, sharing a picture of herself with the man she called her friend.
John McCain has received messages not only from his fellow Republicans but also political opponents as both former President Barack Obama and former Vice President Joe Biden shared their condolences at his death.

“[W]e shared, for all our differences, a fidelity to something higher — the ideals for which generations of Americans and immigrants alike have fought, marched and sacrificed”, said Mr Obama. “Few of us have been tested the way John once was, or required to show the kind of courage that he did” he added, “but all of us can aspire to the courage to put the greater good above our own”. “At John’s best, he showed us what that means.”

Barack Obama, George W. Bush, and Joe Biden are all expected to speak as eulogists at his memorial services. According to sources quoted by the US media, it has been reported that President Trump would not be invited to the funeral and that the current administration would probably be represented by Vice President Mike Pence.

On August 31st, his casket arrived inside the Rotunda of the U.S. Capitol in Washington D.C. He will be buried in his final resting place at the U.S. Naval Academy on Sunday after being honoured to lie in the U.S. Capital state. Only 31 people have been with bestowed with this honour in the past 166 years.