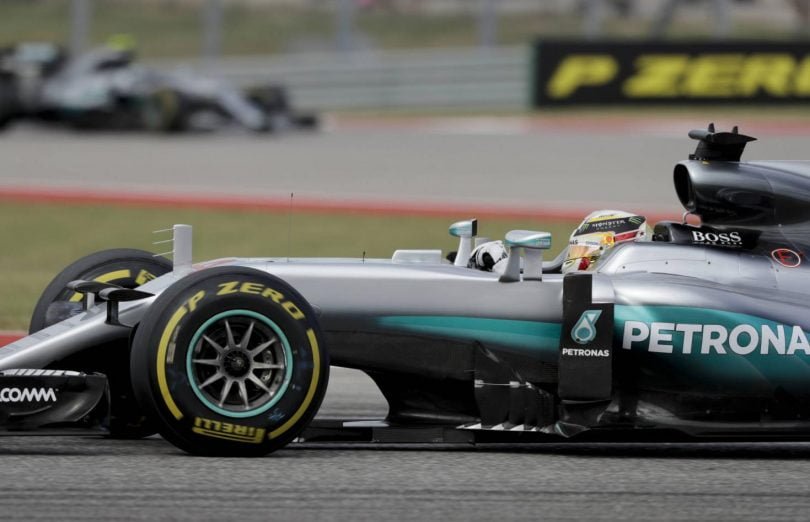 Lewis Hamilton's 50th career victory was his fifth on American soil. Despite Hamilton taking the win, Nico Rosberg is still the favourite to take the championship with the German going into the final three races with a 26 point lead after finishing 2nd yesterday.

Max Verstappen and Kimi Raikkonen both failed to finish the race, as Hamilton crossed the line nearly 5 seconds ahead of Rosberg, collecting his 5th ever win in the United States.

Max Verstappen’s Red Bull picked up a transmission problem, leaving him having to retire in a race which looked extremely competitive between himself, teammate Daniel Ricciardo and Kimi Raikkonen.

VES: "I have an engine problem or something!"

He parks the Red Bull and is out of the #USGP  pic.twitter.com/f1ahvGcNhI

However, the Ferrari veteran Raikkonen also failed to finish, as he appeared to sustain damage to his right rear as he came out the pits.

Hamilton, however, had no such problems, as he controlled the race from start to finish, following up on a dominant qualifying session on Saturday. His win in Austin was his 50th win in Formula one.

@LewisHamilton's win in Texas was also the 50th #F1 victory of his career #USGP  pic.twitter.com/8DKLntqlWv

Championship leader Nico Rosberg finished in a comfortable second despite losing ground on the first lap to Daniel Ricciardo.

Ricciardo attempted the undercut on Nico Rosberg early on but that effort was to fail as Rosberg closed in on his first ever World Championship.

With the Mercedes dominating, and a Red Bull and Ferrari retiring, the Austin Grand Prix presented a perfect opportunity for the midfield teams to pick up more points as the season comes to a close.

Carlos Sainz was the most profitable, as he finished in 6th position behind Fernando Alonso. Teammate Daniil Kvyat’s woes continued after he was hit with a 10 second time penalty following a first-lap incident involving Nico Hulkenberg

Nico Hulkenberg was forced to retire on just lap 1, with Kvyat eventually crossing the line in 12th.

Fernando Alonso made a late charge passed Felipe Massa to finish in 6th place as overtook Massa in the Drivers’ Championship. Alonso consequently sits in 10th in the Championship now following an impressive showing in Austin, despite starting in 19th on the grid.

Felipe Massa’s race was hindered as he had to visit the pits late on as he sustained a puncture following a collision with Fernando Alonso as the Spaniard charged towards the finish line.

With growing speculation at Renault about which driver will retain their seat for next season, it was a big race for pair Jolyon Palmer and Kevin Magnussen. Palmer appeared frustrated at his team’s decision not to let him passed his teammate despite believing he had superior pace.

Kevin Magnussen eventually prevailed as he passed Palmer with no fuss due to the Brit’s lack of grip late on in the race.