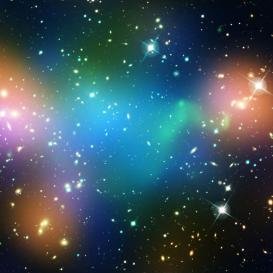 Dark matter confuses me. In fact, a great deal about theoretical and experimental physics confuses me, but I find it completely fascinating. In an attempt to rectify the gaping hole in my knowledge and feel like I was stepping into Sheldon’s world on The Big Bang Theory, I sought out some answers from a real physicist.

The CERN of underground physics

As I found out, dark matter could soon be confirmed as really existing from a twinkle of light. Researchers at a laboratory called SNOLAB have begun an experiment that they hope will show this theoretical and unseen matter colliding with something else.

Dr Jocelyn Monroe and her fellow researchers have been working on a dark matter detector for six years at “the CERN of underground physics”. They are searching for evidence that this invisible matter they say surrounds us has collided with centre, the nucleus, of an argon atom. If they crash together, the dark matter particle should transfer some energy to the argon nucleus which then drops that energy in the detector.

“What we’re looking for is a tiny flash of light,” said Dr Monroe, from Royal Holloway University of London.

SNOLAB is one of the biggest facilities for underground physics of the world. While CERN is trying to create dark matter by smashing two protons together at super high energy, the detector at SNOLAB is looking for dark matter that is already there.

What detecting dark matter would mean

Dr Monroe said that they predict that the detector will measure less than 0.6 flashes of light in ten years, so it’s a very rare occurrence. If they succeed in finding dark matter though, it would be “a huge discovery” for the entire physics community.

A more thorough explanation of the work at SNOLAB can be seen here:

Another way of detecting this mysterious stuff is from what it leaves behind. Dark matter allegedly causes wind when it moves, and Dr Monroe and her team have developed a machine that could detect the direction that dark matter particles are travelling, thus proving their existence.

The researchers say that dark matter wind works just the same as what we call wind on Earth. When you stick your hand out of a car window and it’s moving, you feel the wind. The same should be true of dark matter.

In order to detect this wind, the scientists have to be able to measure the direction that a particle would fly off in after colliding with a dark matter particle. They have to measure the energy transferred when they smash together, and then track where the atom goes afterwards. From this they could work out the wind direction.

This research is being conducted at a place called WIPP, which is deep underground. Here, there is what physicists refer to as extremely low levels of natural background radiation. This means there would be less chance of rogue protons and electrons in the air interfering with atoms and sending them shooting in the wrong places.

Dr Monroe is excited about the experiment, although she admits the theory is ambitious and tricky to comprehend.

“It’s hard enough to measure the energy,” she said. “But to also reconstruct the track and measure the direction is nearly crazy.”

Leaving physics behind at GCSE left me with little to go on in the theoretical world of physics, but from what Dr Monroe told me, the detection of dark matter would be a huge deal. Imagine an explanation for there being more than five times the amount of matter we already know about existing in the universe. Finding it could mean more answers not just to the origin of the universe, but perhaps to everything.