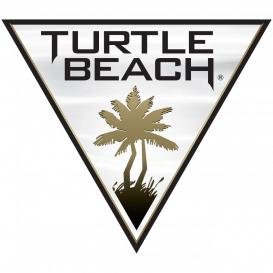 I meet with Keith Hennessey (European Communications Manager for Turtle Beach), as he is finishing with another journalist. He tells me he has some time before another meeting, and offers to run through the latest products as well the new-patented technology HyperSound Clear.

I of course take Keith up on his generous offer and we walk over to one of the pristine display cases at the front of the stand area, where we find three mannequin heads all wearing Turtle Beach headsets. ‘These are the main focus headsets for turtle Beach at the moment’ he tells me. ‘The Ear Force Stealth 420X, the Ear Force Stealth 500X, and our flagship model the Elite 800X which is here at E3 for all to see’.

‘Lets start with the Ear Force Stealth 420X, which is an officially licensed gaming headset designed for the XBOX One. It is fully wireless with crystal clear game and chat audio, has a rechargeable battery with up to 15 hours for wireless gaming, and mobile compatibility via mobile cable with in-line mic which is all packed into this affordable and easy to set up wireless gaming headset’.

‘The great thing about this headset’, explains Keith ‘Is that it has a simple USB connection to the XBOX One and also features a highly sensitive adjustable boom mic, which picks up voice audio loud and clear. However, if you decide you want to listen to music or watch movies then the mic unit is easily removable’. I’m impressed by the headset and tell him ‘I’m now even more interested to hear what the Elite 800X can do, if this is where the Ear Force Stealth 420X is’.

Want to find out more about our E3 announcements? Check this out: http://t.co/7E38MOva7I pic.twitter.com/6Ct6AHGODw

Keith laughs and gestures me over to the Ear Force Stealth 500X. ‘With this headset we have gone up a level, as this headset can do everything the 420X can but with one key added extra…its a wireless DTS headset with X 7.1 Channel Surround Sound, which means you’re totally immersed into the action and gameplay as it goes on around you. Designed again for the XBOX One, this headset delivers incredible interference free wireless audio and chat complete with Mic Monitoring’. I tell Keith that I like the fact that this is a 7.1 headset as that really makes a difference on the accuracy of location when playing games like Call of Duty, where knowing where the enemy are can mean the difference between life and death. ‘Exactly that’ he says, ‘But this isn’t the end as now I want to show you our flagship model here at E3…the Elite 800X!’

We walk over to the left of the glass display and here I see a mannequin head wearing a headset, but…there doesn’t appear to be a mic, or any wires but just a headset. ‘So this is our flagship model, the Elite 800X. This headset takes all of our other headsets here to another level as not only does in already encompass all of the features of these two headsets but brings something special to the party’.

‘Of course it’s a wireless headset, but it also has the added benefit of having Bluetooth built in. This means that not only is it great for gaming, but it’s also fantastic for music or movies. Allowing the user to synch the headset to their phone means that you can be walking down the street listening to your favourite music, and then be home and play your favourite game without having to connect any wires or take your phone earphones out and put your turtle Beach headset on’.

That really is impressive, but what about the other features that make this the flagship headset? ‘Well, this headset has noise cancelling and superhuman hearing built in, which means that you can hear everything that goes on without having to strain or have to deal with the sounds outside. It also has mic monitoring which means when you speak you can hear yourself, which allows you to maintain your voice levels without shouting. However, the final unique selling point of this headset is the mic’.

I look but can’t see a microphone anywhere, but then spot a tiny dot like hole on the left side of the earpiece. ‘That tiny hole is the mic’ Keith tells me. ‘The way the technology works is when you speak the mic picks up everything you say from where your mouth is, but ignores ALL other sounds. It’s an exceptionally amazing piece of kit, and we are all very proud of it!’ I agree and tell Keith I can see why it’s the flagship model, as it makes me think about other gaming headsets I’ve tried, but this one appears to be far superior to anything I’ve tried before.

I take this opportunity to thank Keith for taking the time to run me through the current offerings from Turtle Beach, and ask if there is anything else that the company is focusing on. That’s when Keith mentions their patented technology HyperSound Clear.

‘HyperSound Clear is our patented groundbreaking technology which has been years in the making. This allows a person who may be suffering with hearing loss to benefit from a louder and specifically directed sound to them, but without making the device they are using louder to the annoyance of anyone else around them. Let me give you an example: Imagine a light bulb in a ceiling fitting which when you turn it on it throws light everywhere, now imagine a torch which throws a directed beam of light specifically in one line targeting one specific line of light. That is the same for HyperSound Clear.’

‘With HyperSound Clear we hope to allow those people finding it difficult to hear audible sources such as a television the ability to have a boosted sound directed to them in that field of sound, but without boosting the sound in the entire room as is currently the case. This way we are not only a company that provides our gamers with the best sound experience when gaming, but are also a company that creates unique technologically sound products for anyone suffering with the inability to hear clearly whatever their age or situation’.

With that Keith takes me into a demo area where two small speakers are set up, with a Turtle Beach sticker in the middle. Keith instructs me to stand on the sticker and as I do, I can hear sounds coming from the speakers, however as I step off the sticker the sounds disappear! I find that slightly unbelievable so try it again and immediately the sounds are back, and as I move away they are gone!

I tell Keith I am amazed by what I’ve just experienced with HyperSound Clear as I know that there are hundreds, if not thousands of people who will benefit from this innovative technology. ‘That’s exactly what we are trying to do’ says Keith. ‘We pride ourselves in being an innovative company, and with HyperSound Clear we are maintaining that aim to continue to create and bring something to the masses that has not been seen or achieved before.’

I thank Keith for his valuable time and as I walk away I wonder if what I just experienced actually did happen, or if this was some kind of trick being played on my senses?

For more information on Turtle Beach and their headsets goto: www.turtlebeach.com

With experience in the games, music festival, charity, tech and design industries, Abid has worked in PR for the last 10 years. However, it is watching and reviewing films and theatre productions that he enjoys the most.
Twitter: @AbidGangat