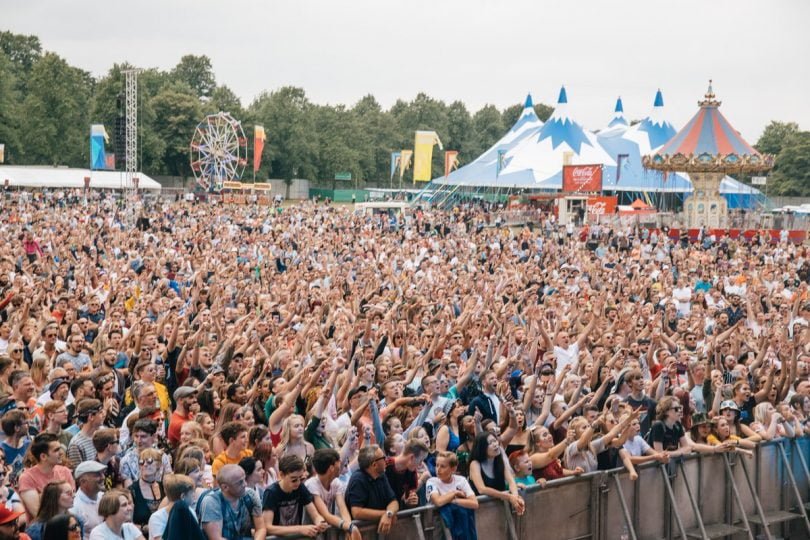 On its 10th anniversary Tramlines didn’t disappoint. After the controversial move from Sheffield city centre to Hillsborough Park, many were curious to know how the festival experience would be, and, in all honesty, it couldn’t have been better.

Having had the opportunity to attend last year’s edition and being able to compare both locations, each with their own pros and cons, I cannot see Tramlines anywhere else after the weekend I spent at Hillsborough Park.

On one hand, having concerts spread throughout the city created the  atmosphere that  the whole of Sheffield had been magically transformed into a music festival. However, being put in a large, fenced park is more traditional, organised, and familiar to festival-goers. More than that, it’s also more convenient. You didn’t have to walk loads to get from one stage to another, you could tell where things were more easily. Getting lost just wasn’t going to happen.

On the other hand,  some could argue that being a closed space, you couldn’t go out to get food, and that’s fair. It felt very impractical to leave the festival site to get some chips but that didn’t mean you couldn’t do it. There was also a very large number of food trucks with diverse options. As someone who is allergic to gluten and went to the festival with meat eaters, vegan, and vegetarian friends, we were all very well catered for. And the prices? Yeah, they could’ve been cheaper, but we did get good quality scran.

Even though this was a tram-less Tramlines, (I’m referring to the fact that there was a tram strike on the exact weekend of the festival) replacement shuttle buses were available for £3 at the end of the event. They were an easy and quick way to get back to the city centre without hassle.

Now, let’s get onto the good stuff; Friday headliners were Stereophonics, known for the song ‘Dakota’ which they closed the show with, started off the weekend with an energetic performance and had the crowd going with old school tunes like ‘Maybe Tomorrow’ and  ‘Handbags and Gladrags’.

Saturday on the main stage, the Everly Pregnant Brothers, a satirical band formed by middle-aged men, gave us the songs we didn’t know we needed. Hits like ‘No Oven No Pie’ (a play on No Woman No Cry) and ‘Chip Pan’ had us screaming ‘me chip pan’s on fire’ instead of ‘your sex is on fire’. Tramlines was the biggest crowd they had ever played to and it was certainly one who was enjoying it. Their clever and funny take on music hits were a refreshing way to start off the festival’s second day and they even brought out Sheffield’s lord mayor, Magid Magid, on stage for their last songs.

Other acts such as Coasts and Fickle Friends, two charming Southern indie bands, provided us the very essence of summer and festival good vibes during their sets.

However, an act that was less warmly received was Mabel. Her singing was absolutely on point, but it felt like her performance and stage presence lacked a bit of enthusiasm.

Another Saturday act worth mentioning is Stefflon Don. The Birmingham rapper brought out a crew of incredible dancers and turned the heat up a notch. She was followed by electronic music band Clean Bandit, who seemed to love being on stage. When the trio was not playing the cello, keyboard, or drums, they were throwing out shapes and interacting with the singers.

There were also plenty of after parties throughout the weekend to keep the night going. Saturday’s Horse Meat Disco at Foundry and Fusion effortlessly made disco cool again with their retro and underground set.

Finally, Sunday’s closing act, pop/garage star Craig David, was a lot of fun to watch and dance to, but he also took the time to share a special tribute to Sarah Nulty, the director of Tramlines who died earlier this month. Tramlines launched t-shirts and bags with the slogan ‘Be More Nulty’ in her honour, with all proceedings going to Weston Park Cancer Charity and Cavendish Cancer Care.

This year’s Tramlines was a huge success with up to 30,000 people attending over the weekend and people can’t seem to get enough of it. When early bird tickets for next year went to sale, they sold out in minutes, with now over 20% of tickets for 2019 already sold, according to organisers.