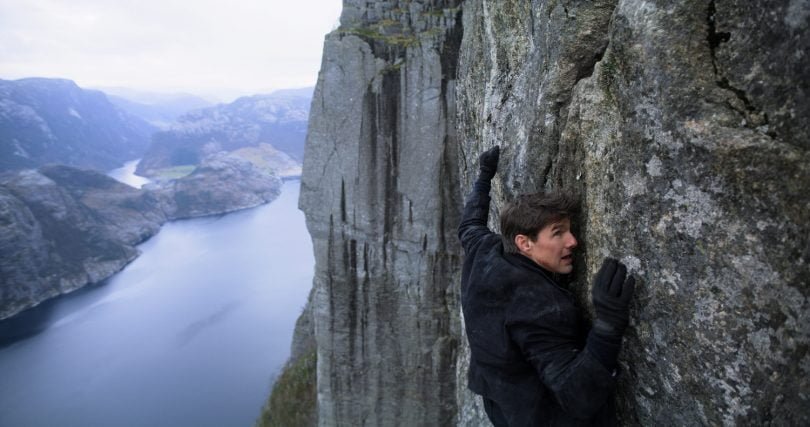 There’s an illuminating moment in Mission Impossible: Fallout, the sixth and possibly best movie in the series, where Tom Cruise’s alter ego Ethan Hunt looks finished. He’s standing in a men’s bathroom inside a Parisian ballroom-turned-rave, panting and hunched over, having just had the living shit kicked out of him by a younger, fresher opponent.

This would-be successor stands confidently across the room, legs apart like a Tory cabinet minister, having already easily dodged Hunt’s first attempt to subdue him and taken out his hotshot partner.

The comparison is stark. Tom Cruise has just turned 56, and watching the scene above you’d be forgiven for saying he’s finally starting to look it.

There are other moments in the film which reminded me of his age. He first learns of his next mission while lying low in Belfast, but when the message ends in the traditional style by telling him it will self-destruct in five seconds, he stays slumped in his chair. You can almost hear him let out a weary sigh.

Later, when chasing down an enemy in London, he learns he’ll have to jump out of an office window probably close to four stories up. For a franchise with more running and jumping in it than a Mario game, this realisation doesn’t seem to sit all that well with Hunt, and when he does dive out after a short pause, his landing makes you wince far more than it would have in any of the previous films.

And in the final climactic battle on top of Norway’s Preikestolen, otherwise known as Pulpit Rock, he’s once again largely outmuscled and outmatched by his rival. This being Tom Cruise’s film, he still wins most of the fights he gets in, but when he’s up against seasoned foes he often comes up short and requires the help of a partner or luck.

The idea that Mission Impossible is starting to acknowledge Cruise’s age might seem depressing at first, as if a film containing masks that allow you to look and sound exactly like anyone else is starting to take itself too seriously. But for me, it was one of the strongest parts of Fallout.

We can tell ourselves that Cruise will be able to do this forever, and he very well might. Stallone and Schwarzenegger are still making action films well into their 70s. With the help of a good diet and regular exercise – not forgetting plenty of stunt doubles and camera cuts – actors can keep starring in these films long after you’d expect them to pack it in and make an interesting documentary on traditional Indian food or the Cold War or something.

But when your action hero is old enough to pick up their own free bus pass, these films lose that last vital shred of realism. No one’s claiming that Tom Cruise, or just about anyone, could actually survive what he did in Fallout, but you aren’t required to ‘turn your brain off’ while watching it quite as much as if he actually looked like the average 56-year-old.

Mission Impossible: Fallout could have ignored all that and kept Cruise as an unstoppable machine who worked best alone, but by tweaking the film to be slightly more believable they created a far more enjoyable film. If there is to be a seventh Mission Impossible in a few years’ time, when Cruise is pushing 60, I hope they don’t forget this.