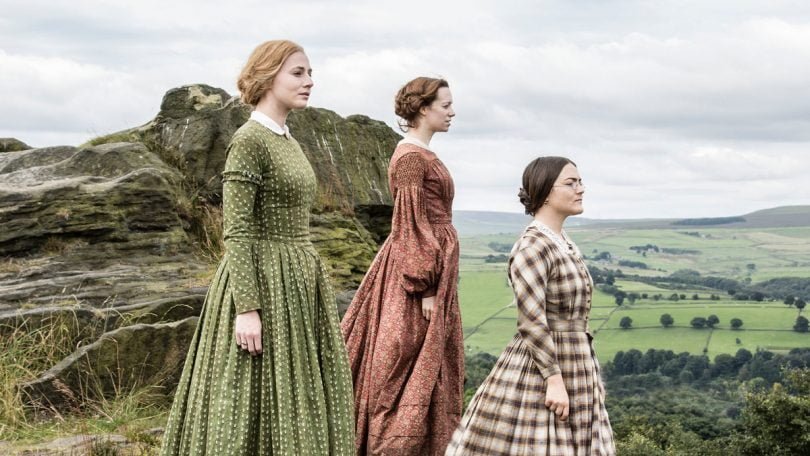 I've been going to Haworth every year whether I liked it or not since April 1997 when I was 14 months old. My mum has always been a massive Brontë lover, so every year (and sometimes twice) we made the two hour trip from Hull to see the exact same sights and briskly walk across the Moors. My first trip 20 years ago was because it was the 150th anniversary of Jane Eyre (1847) being published under Currer Bell, and the original manuscript was on show for the public in the Brontë Parsonage. It's quite fitting now to have watched Sally Wainwright's Brontë tale, as I've grown fonder and more appreciative of the setting in the later years that I've visited.

"I relinquished my pen… because it frightened me, threatened to make the real world seem pointless and colourless and drab, and that way lies madness," says Charlotte about 10 minutes into the TV film. In 150+ years of hindsight, the irony of that sentence really becomes a relief. Imagine if the great writer of Jane Eyre actually had relinquished her pen.

It is perhaps the second part of that sentence that really formulates the plot, as she tells Anne that a publisher rejected her because "Literature cannot be the business of a woman's life". It's a good job she eventually recognised that as nonsense.

Written and directed by award-winner Sally Wainwright (Happy Valley, Last Tango in Halifax), To Walk Invisible starts Charlotte, Emily and Anne's story about three years from their brother Branwell's swift demise. The two-hour drama is heavily focused on his character and his failings as a writer and poet; we quickly find out he's just lost another job, has been having an affair with a married woman, and is increasingly reliant on alcohol and smoking.

It's clear from the off that although primarily about Branwell, the drama is concentrated on the three sisters' relationship with him, and Wainwright cleverly applies a cyclical nature to the opening and closing scenes. The happy, carefree times the four children have with their imagination in the opening scene looks as though it is to be replicated in the penultimate scene as a tribute to Branwell, only for it to take the shape of a touching send-off instead. Arguably, not much happens in the three years of which we watch the family; Branwell drinks, he smokes, he cries, he is almost arrested and so the cycle continues. It does, however, take its time in arriving at the period beginning Charlotte, Emily and Anne's careers as writers.

After numerous, unsuccessful and damaging rejections from publishers, it comes to their attention that they will never be published if they continue to live as women. From here, Currer, Ellis and Acton Bell were born and their life of hardship and inequality changes somewhat.

Powerfully written to demonstrate how the trio adamantly ensured to choose gender neutral names to not give into male power yet again, it acknowledged a small but enormous triumph in this period piece.

Wainwright is renowned for her writing of strong, character-driven dramas, and it was not indifferent to her well cast Brontës. With stellar performances from Finn Atkins, playing a hard, severe but determined Charlotte, Chloe Pirrie, portraying Emily as tough but compassionate to the exception that is Branwell, and Charlie Murphy as Anne, who is a perfect in-between of the two extremes, there is a real sense of triumph when the three of them agree "We must walk invisible"; the first reference to the title.

Adam Nagaitis plays Branwell with a poignant awareness of his struggle, demonstrating the sickening inner demons that accelerate his inevitable end. His character is despicably enticing and enhances a deep infatuation so you can't help but feel an intense sympathy and pity for him. It is the pained, concerned expression on Charlotte's face one evening when she attempts to reconcile with him, to which he laughs about his epic failures that you realise how much promise there was for him, and understandably how much frustration he feels now the illusion of success is shattered once again. It is when she leaves that his laughter turns to tears, and the self-reflection that he will just waste away hits home.

Jonathan Pryce excels as Mr Patrick Brontë, the man who tragically outlived his wife and five children. It is perhaps his reference to Maria and Elizabeth – their two other siblings who died young – as the youngest that tugs the most touchingly on the heartstrings, as Charlotte firmly reminds him that they were actually the elder siblings.

The two hours itself passes relatively slowly due to the dramatic, true-to-life direction it takes, but it isn't a negative. Not at all. In fact, it's just what a biopic of this nature needed. In a truly well-composed, beautifully set and tragically foretold story, Wainwright captures the bleak, miserable times it would have been for the sisters had they not had prospects, or had they not acted on them. The unimaginable was presented in a way that highlighted the magnitude of what three Yorkshire women did.

2016 ended with this breathtaking piece of cinematography, leaving me stunned and moved by what I had seen. I cried slightly as the enormity and comprehension of what they achieved really setting in.

Overall, it gets a full 5 stars- the whole 10/10. I was stunned by the whole incredible writing, casting and cinematography from the off.

(This review was previously published on Life of a Little Olive.)