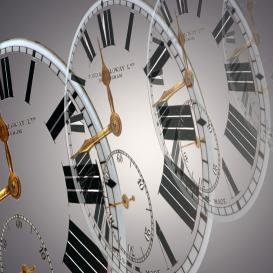 A recent conspiracy theory has begun to circulate online with a video from Mike Tysons’ 1995 fight with Peter McNeeley showing what some people think looks like a modern day camera phone, when there were no camera phones available at the time.

As this article points out, there were camcorders that looked similar to what we see in the video, but we won’t let that sort of logic get in the way of a good time travel conspiracy.

So, despite logic trying to ruin the fun, what would you do if you could time travel? We took to twitter to find out.

@KettleMag I’d go backwards! I would love to experience the 50’s and 60’s maybe like a ‘best bits’

Most of the responses involved visiting a particular time or place.

@KettleMag I’d like to go hang out with Henry VIII, but only a quick visit. I’d like to come back with my head still attached!

Some had specific goals in mind for their time travelling escapades.

Just got back from 2020, Trump has gout. RT @JeffreyGuterman: Any #timetravelers on twitter?

While #future #timetravelers waste time on #Hitler, I’m going after #inventor of #pushup #bra.
YOU’VE LIED TO ME FOR THE LAST TIME!!

As many films, books and tv programmes have shown us, time travel could offer as many benefits as it offers drawbacks, we’ve all heard the warning that making any changes in the past could drastically alter the present. How many of us have thought about going back in time to stop ourselves or someone else from doing something stupid? Or how about travelling to a time when you were making a big decision, and afterwards wondered what the alternative would have been like?

Would you go back and place bets on sporting events? Invest in a startup? Change a big decision? Let us know in the comments below.