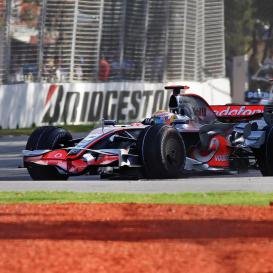 The first race on the Calendar was a lot different to how many would have expected, as the sport witnessed some drastic changes, none bigger than the loss of the iconic Michael Schumacher who retired after the 2006 season. Also, notably Bridgestone were to be the tyre suppliers for the next 3 years from 2007 to 2010, and Fernando Alonso was to leave Renault after 5 years to join McLaren. The stage was set for the drivers and the teams as Melbourne got the calendar under way in emphatic fashion.

No easy ride for Alonso

McLaren’s new recruit Fernando Alonso was aiming to become just the third driver to win three consecutive World Championships, but it was his new teammate Lewis Hamilton who stole all the headlines. The 22 year old marked his arrival into Formula one by achieving a podium finish in Melbourne, finishing third behind Ferrari’s Kimi Raikkonen and Alonso.

In a season dominated by Ferrari, it was the Finn Raikkonen who followed up his impressive qualifying time by leading the Grand Prix throughout, meaning he was the first driver since Nigel Mansell in 1989 to triumph on his debut for the team. Raikkonen’s Brazilian teammate Felipe Massa saw his chances of achieving a podium finish slashed, after he was moved to the back of the grid after an engine change. However, Massa did work his way up the midfield and finish in a respectable sixth place.

Hamilton, this year going for a fourth World title, was to finish just behind his teammate Fernando Alonso despite gaining the initiative early on, gaining a stunning start going round the outside of both Alonso and Sauber’s Robert Kubica. The two McLaren’s and Raikkonen were battling for first position for all 58 laps, and all three had the lead at some point in the race. If the 2007 rendition of Melbourne is anything to go by this year, the 2016 calendar will get off to a flyer.

Hamilton’s current Mercedes teammate Nico Rosberg finished the race in seventh, which secured a good days work for Williams on the opening day, as the German worked his way up from twelfth on the grid. His overtake on Ralf Schumacher on Melbourne’s Clark Chicane arguably the best of the race as the Williams-Toyota team impressed.

Michael Schumacher, older brother to Ralf, was absent to the grid due to his retirement, and from this race onwards Formula One has carried a tag of the ‘Post-Schumacher era’ – fitting for one of the greatest drivers to have competed in the sport.

Now, moving nine years on from this season, the drivers must do it all over again. Come March the 18th the teams will be lined up on the grid ready for another season full off thrills and spills, and none better place to start than Melbourne’s street circuit around the Albert Lake Park.