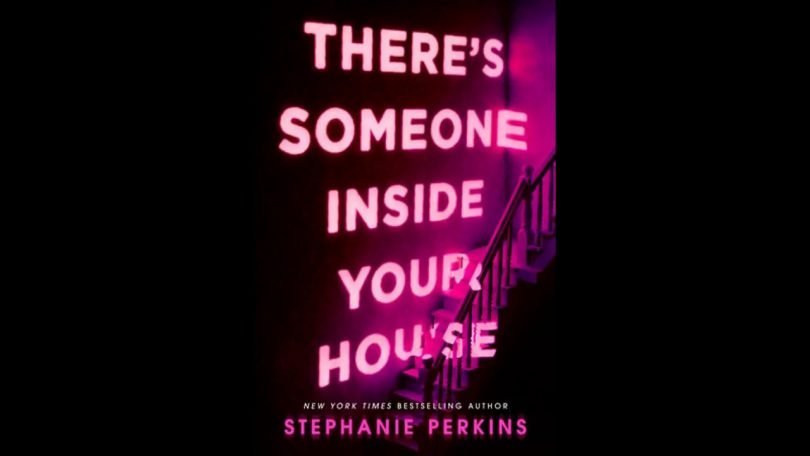 With Halloween season upon us, many are preparing for the spookiest parties of the year. There are costumes to be purchased or made, nostalgic movies and Halloween themed cartoons including “It’s The Great Pumpkin, Charlie Brown,” to be watched, candy to be eaten, pumpkin spice flavored drinks and food, and books to be read (as if we didn’t have enough already on our to be read lists).

For us novel enthusiasts, R.L. Stine got us started on our scary book endeavors with the beloved Goosebumps franchise as kids, while Stephen King holds the reign for one the most widely known and critically acclaimed horror authors. Both authors have had many of their books adapted into television shows and movies, and their names continue to remain a legacy for years to come, especially during this time of the year.

While both have had various successes with their work, I decided to review New York Times Best Selling author Stephanie Perkins’ There’s Someone Inside Your House. She is best known for writing contemporary coming-of-age stories, so many fans eagerly awaited for her first writing of the horror genre. So how does it hold up in the horror genre? Let’s move forward and get right to it!

Our hero is Makani Young, a high school girl who recently relocated to a small town in Nebraska from Hawaii to escape her dark past, and is now living with her grandmother to finish her education. While her past lingers in her thoughts, she has established herself in the town and has two loyal friends, Alex and Darby. Her love interest is a misunderstood outcast named Ollie. Makani appears to have a normal life once again, that is until one by one, her high school peers are murdered.

Throughout the novel, we see Makani’s life in Nebraska as she hangs out with her friends, pursues her crush Ollie, and her conversations with her grandma. This can come across as slow while we’re wanting to uncover further details to move the story along, but Perkins throws in chapters that take the viewpoint of the victim’s on their last day and how they’re brutally killed that build suspense and encourage the reader to continue forward.

Makani goes from discussing rumors about the potential motives from the killer to becoming an almost victim herself after she thwarts an unexpected attack from the murderer in her home. She takes it upon herself to save her classmates and bring the killer to justice.

Whether you’re rooting for the hero or for the villain in either books or movies, the characters must be appealing to the audiences in order to be well received. Perkins does just that in providing a strong leading character along with a great supporting cast. She also incorporates the right amount of slang in the dialogue between the teenagers to give the book a more authentic feel for adolescents.

We also see a contemporary society as she discusses modern day fashion and technology, different social cliques, unique character traits, and backgrounds. Makani is part African-American and part Hawaiian, while her friend, Darby, is a transgender male. Perkins briefly addresses the small town’s school intolerance of a transgender student but creates a social normalcy by allowing Darby’s loyalty to his friends to shine through without having his gender be the focus of the story.

Our villain surprisingly displays comedy through the killings, as the murderer finds ways to toy with his victims, as well as putting Makani in humorous outcomes in fight or flight situations. The combined mix of horror and comedy gives a feel for the slasher film “Scream,” but in novel form.

The killer is revealed a bit too soon in comparison to normal outcomes from ‘whodunit’ stories. So how does the book continue once the identity is discovered? Perkins doesn’t leave us hanging, as we’re constantly at the edge of our seat wanting to see if Makani will survive. Though the killer is unexpected, the motive falls a tad short. It’s not impactful. However, what I also found intriguing is just that, sometimes we don’t need an outlandish motive.

Nonetheless, we’re left with a superlative ending. Who survives and who perishes? Does Makani stand heroic, or does the killer get their way? This is overall a great pickup for this Halloween season!