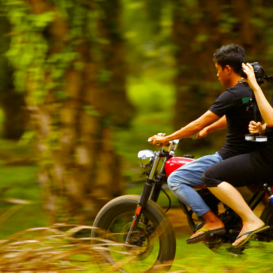 In this series we interview a person from a country outside of the UK about their views on life in their native country. This week we speak to Anya, who can only be described as ‘international’.

Where are you from?

I was born in Russia, grew up in Cuba, went to school in London and college in Jamaica. I’m currently back and forth-ing between London and my beloved New Orleans, with a firm plan to retire in Japan, the only other place I love more than New Orleans. So when people ask me where I’m from, the only thing I can say is, ‘I’m foreign wherever I go’.

Where do you work and what do you do?

I graduated in African & Caribbean dance but by a quirk of fate began working within video production. Ricky Gervais was my next-door neighbour before he was ‘Ricky Gervais’. And after a stint assisting others with their productions, I ventured out to start my own company of which I’m at the helm as a video & artistic director, with a very talented team behind me. My ultimate goal is to combine my love and expertise of dance, film and travel to becoming the go-to person for dance on film.

What do you think is a unique aspect of your country?

As I mentioned, my national identity can best be described as ‘fluid’. So from that perspective I embrace the best of every location. What I’d like to share from my experiences is the unexpected elements of each place.

Russia is a country in love with the arts, and not only its own but internationally. Just look at how detailed the paintwork done on the babushka dolls on this site and you’ll know what I mean. An idiosyncrasy of past communism means that most Russians are very well versed in everything from Cuban impressionists to Korean Jazz Orchestras to French literature. I love Russia for managing to tread that line of having its own strong cultural identity without being insular to the world around it.

In Cuba you will find some of the world’s greatest engineers. A country that led me to realise that poverty breeds creativity out of sheer necessity. Due to the previously imposed US sanctions, which caused a lack of supplies, the neighbourhood granpapi could fix the trouble with his car engine using the most improbable materials like an episode of Mageyvor.

In Jamaica you will find a subculture that I’m fascinated by. On the west of the island lies the small enclave of Boston Bay, which purports to be the birth place of jerk, a distinctly Jamaican style of seasoning and barbecuing. But what fascinated me is it’s also home to a little known, yet thriving, Jamaican surfer scene. Hawaii yes. Australia… maybe. But I would never have imagined Jamaica to be a surfer’s paradise.

What makes the UK special is its tolerance and inclusivity. Unlike other countries that focus on encouraging and supporting people who naturally excel in their field from a young age, the UK lets people change and evolve in their interests and identity. A luxury simply not afforded by a lot of other countries, and one that I treasure.

I realise New Orleans isn’t a country but as countless tourist souvenirs around the city will inform you, ‘there’s America and then there’s New Orleans’. Some call it the northernmost Caribbean city while others say it’s America’s most European one. Regardless of what side of the fence you’re on, you can’t deny that New Orleans is incredibly romantic. To me much more so than Paris. From the alleys of gently swaying willow trees to the faint sound of music no matter where you are in the city, to a thick southern air that requires a drawl in your speech and a fan in your hand, that fills your nostrils with an intoxicating mix of cajun seasoning and sweet pralines, as you sit under the watchful canopy of a banana tree. It’s just conducive to falling in love.

What do you think is the biggest issue facing your country at the moment?

Well the UK is grappling with its membership in the EU and Scottish independence. Russia is facing economic difficulties as the price of oil plummets. Cuba is going through a very interesting stage in its history, as US citizens have been allowed to travel to the country as the embargo has been relaxed. But how it will shape the island remains to be seen. Jamaica continues to fight to establish more sustainable industries beyond tourism and its cultural exports (music, cuisine etc). New Orleans is heatedly debating gentrification, as one of the biggest African-American populations in America is being priced out of the city it built.

What do you think first comes to mind when people are talking about your country?

As with everywhere people revert to stereotypes. And to an extent tourism preserves culture but sometimes perpetuates a caricature of what visitors want to see as apposed to exploring the history that’s in the making. Russians love vodka, have a lot of maffia and bears roam the streets the way racoons terrorise American suburbia. Cuba is a perpetual rum-swilling, cigar-smoking, party town. Jamaica is ganja central. The UK is a bowler hat-wearing, Hugh Grant/Colin Firth-looking tea party, while New Orleans is perceived to be either a modern day Sodom & Gomorrah or a real life Gone With The Wind. But equally it has to be said that the same way people always want to learn the swear word of a language first. Those cultural stereotypes mentioned aren’t necessarily meant derogatively by the people applying them.

Do you know someone we could interview for the Worldly Wise series? Get in touch with us via Twitter – @KettleMag