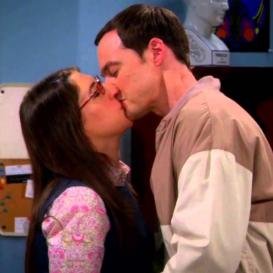 Every relationship has its ups and downs and whenever we’re battling through issues with our other halves we begin to look at other couples and compare how they are so superior to ourselves.

What you have to remember is that their happiness may not be real, things may not be as they seem, it may be just for show, like the relationships we see on TV.

TV couples often give us unreal expectations of what relationships should be like. But still we are glued to the TV waiting to see how it plays out and we begin having emotional ties to them so god forbid if they ever broke up because I think we would all be going through a very long mourning period.

So if you get a little bit too involved with on-screen romances, here’s my top five TV couples that have been proving for decades that prince charming isn’t just a character created by Disney;

The couple that have so much in common and definitely belong together, but you wonder how they even managed to go on a first date because they are so socially awkward.

The number one on screen ‘geeky’ couple has to be Sheldon and Amy from The Big Bang Theory, its amazing to see how over the seasons Amy has brought him out of his shell but there are still aspects of their relationship that no matter how much you re-watch the show you’ll never actually understand how they crossed over into the world of being a couple.

The couple that make you feel sick with how cute they are, but you’d be heartbroken if they ever broke up.

So probably the greatest couple and the only high school sweethearts in TV history to not end up together, but who totally should have has to be Dean and Rory from Gilmore Girls. After seven seasons of agonising over Rory ditching Dean for bad boy Jess, to then Dean marrying Lindsay and then them finally being reunited when Dean’s marriage came to an end, for them not to live happily ever after was heartbreaking. I think any Gilmore Girls fans can say they were sad when their relationship wasn’t resurrected in the final season because they are the couple that were meant to be.

There the couple that make you sick with jealousy as they seem to have the best of everything and live the perfect life.

The ultimate on screen power couple has to be Gossip Girl’s Chuck and Blair, it may have taken six seasons, a lot of drama, numerous mix match relationships but they finally came together as King and Queen the Upper East Side in the final season.

With wealth, beauty and power what more could you want except each other and after agonising over numerous episode as to what would happen between them, never mind the amount of times I’d be screaming ‘oh just kiss already’ it finally happened. So its fair to say we were all happy when they finally tied the knot.

The couple you don’t really understand, they’re isolated from the world and you don’t really know why their together but you kind of like the fact that they are because it gives you a lot of things to gossip about.

The weirdest couple on TV today has to be Tate and Violet from American Horror Story. Tate is the modern day Casper, he’s the friendly ghost that doesn’t actually realise he’s a ghost and even after all the bad he’s done he still manages to prove to be a better boyfriend than most teens nowadays.

Tate and Violet share a weird love of mutual isolation and develop a relationship that leaves you wondering is this cute or scary. You can be your own judge but a teen dating a ghost has to be the weirdest love story since Bella’s battle between does she choose the vampire or the werewolf.

The couple that no matter what, you just look at them and know they are destined to be together. It doesn’t matter how the relationship started you know it will end with them reminiscing about their golden years when their old and grey holding hands whilst telling their grandchildren to behave.

The greatest destined couple has to be Friends Monica and Chandler, they started as friends then it turned into a whirlwind romance. Even with all the struggles their relationship faced we got to see them triumph in the end with the birth of their twins. They are the couple we knew would never split up but just wanted them to have everything they ever wanted because they are just so damn good together, we just wanted them to be happy.

So that’s my top five, as you can see I have very random choices when it comes to genre’s, but that could be what makes these couples so amazing, they’re all unique.

Every TV couple is relatable in some way, that’s why we love to see their relationships blossom. So the next time you’re watching your favourite TV couples think about what it would be like if they were real. Do you think they could make it in reality? Plus it turns into a fun couple game, how would you describe you’re relationship, what kind of couple are you? Its actually a lot harder to figure out than it may sound.