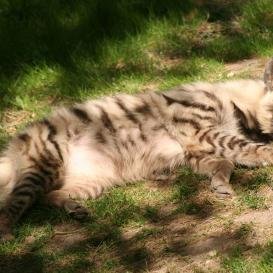 In the face of harsh conditions, animals have been known to team up and help each other out. This can occur by symbiosis, such as when birds pick the food from the teeth of crocodiles, or parasites from a hippo’s back. It can also take the form of an alliance between two creatures that appear to be unlikely allies.

This is what researchers from the University of Tennessee, Knoxville, observed between striped hyenas (Hyaena hyaena) and grey wolves (Canis lupus) in southern Negev in Israel. It is not dissimilar to the agreement between Scar and the hyenas in The Lion King, who co-operate because they are hungry.

The study watched both of the animal species, and the zoologists came to the conclusion that they were working together to find food in the particularly inhospitable conditions of the Negev desert.

The researchers observed that the animals were moving together through the labyrinth of canyons in the desert, even though the hyenas are mostly solitary and wolves hunt in packs. They initially suspected the behaviour from the animal tracks, and then again four years later.

Both species are canines, which could have something to do with their mutual trust. The researchers said that it isn’t always an “us and them” attitude when it comes to animals, and behaviours like this are probably more common than you might think.

“Animal behaviour is often more flexible than described in textbooks,” said co-author of the study Beniamin Eligulashvili, who is an Israel-based zoologist. “When necessary, animals can abandon their usual strategies and learn something completely new and unexpected.”

He added: “It’s a very useful skill for people, too.”

However, the team were quite surprised to see this particular team-up because in general, hyenas and wolves are not actually friendly towards their fellow carnivores. Hyenas are notorious for fighting with lions and African wild dogs, and wolves hunt and kill lynxes and coyotes.

Using both sets of skills

Vladimir Dinets, UT assistant professor of psychology and other co-author of the paper, speculated that perhaps both hunters tolerate each other because the benefits from roaming the desert together outweigh anything achieved by fighting. Wolves are the more agile predator and can provide large kills, while hyenas have a very good sense of smell, are better at digging out buried food and are skilled at crunching large bones.

The researchers cannot be certain whether it was the same individuals that were involved in both cases, or whether this phenomenon occurs more often in other places in the world where both species occur. This will require further research into the animals’ behaviour.

The grey wolf and the striped hyena are found in many of the same geographic areas, particular in Asia, but the southern Negev is the most arid place where both species are known to live.