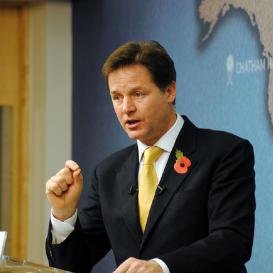 In the days leading up to the 2010 general election, the Liberal Democrats were experiencing a significant rise in their political popularity with students. At the centre of their manifesto was the scrapping of tuition fees, phasing them out over six years and scrapping fees immediately for final year students.

“[We will] scrap unfair university tuition fees for all students taking their first degree, including those studying part-time, saving them over £10,000 each,” the manifesto said at the time. “We have a financially responsible plan to phase fees out over six years, so that the change is affordable even in these difficult economic times, and without cutting university income. We will immediately scrap fees for final year students.”

Its leader, Nick Clegg, had campaigned hard on that promise. In addition to its manifesto, he and other party members had signed an agreement with the National Union of Students not to vote to increase tuition fees, a move done under the organisation’s Vote for Students pledge.

Going into polling day, it was that promise that appealed most to students, and saw the party in a new light, gaining the student vote away from the current Labour government.

“They made a clear commitment they had been opposed to tuition fees,” said Dr Alexandra Kelso, associate professor of politics at the University of Southampton, in a telephone interview. “That was attractive for them. Nick Clegg had a pivotal role with that.”

By the time the votes were counted, it had emerged there would be a hung parliament, the first time since 1974 where no party achieved a majority of seats in the Commons. Negotiations began at what form the next government would take. At the end, David Cameron and the Conservatives entered into a coalition with Clegg and the Lib Dems.

Kelso says there were questions at the time on Labour’s legitimacy in government, and the Conservatives had the largest share of seats.

“The Conservatives opted for a coalition compared to a minority government,” Kelso said. “The Lib Dems talked to Labour about a coalition but they and Labour would not have had a majority.”

A matter of trust

The promise of tuition fees still remained a part of the party’s thinking, but in 2012 a vote was made to raise tuition fees to £9,000. Voters were angry, and Clegg issued an apology for breaking the promise he made, in a video on YouTube.

Now, as the lead up to this year’s General Election continues, Clegg is trying to reassure the public, especially student voters, of why they should be re-elected. In an interview with Radio 1’s Newsbeat, Clegg said the move was difficult.

“I’m not prime minister, I lead a party of 8% of MPs in Westminster. In politics as in life you can’t always do what you want, so we did the next best thing,” Clegg said, adding that his party ensured that students on part time courses had not had to pay fees up front, and there were more young people in full time courses at universities in England. “You only need to pay years after university and if you can afford to do so.”

The race to election day

The interview came amid a campaign by the NUS to encourage voters to vote against the MPs who broke that promise, including Clegg, in a campaign known as the Liar Liar campaign. The NUS did not respond to Kettle’s requests for interviews, but in an interview with the BBC, the organisation’s president, Toni Pearce, said they would not allow the Lib Dems to forget the issue.

“I’d like to say directly to Nick Clegg that your apology won’t cover any of the £40,000 debt that students will graduate with for the first time this summer,” Pearce said. “They pledged to scrap tuition fees – they lied. We won’t let them trade lies for power again. We represent seven million students and are urging every single one across the country to vote against broken pledges.”

They lied to us. It’s time to vote out the tuition fee pledge breakers http://t.co/P1eCam0R4N #GenerationVote #GE2015 pic.twitter.com/FoXQCR7CwW

Kelso says that with the tuition fees, students have now deserted the Liberal Democrats and are supporting the Green Party and Labour. Kelso says the student vote would be crucial in 10 constituencies, including Bristol and Norwich. Other issues that would be important to students include housing, job prospects and what the best scenario would be for 18-24 year olds.

“If the Liberal Democrats lose student votes, that will indicate the loss of vote share in marginal constituencies,” Kelso said. “That will feed into the losses that the Lib Dems will have.”

With the polls indicating that the final picture of the next Parliament is too close to call, the days ahead are crucial for the parties to convince the public they are the right choice to be elected in to government. Yet, for Nick Clegg and the Liberal Democrats, that task appears cumbersome, in a time where the voters who trusted them are sceptical of what the party can offer, and if promises made can be kept long term.