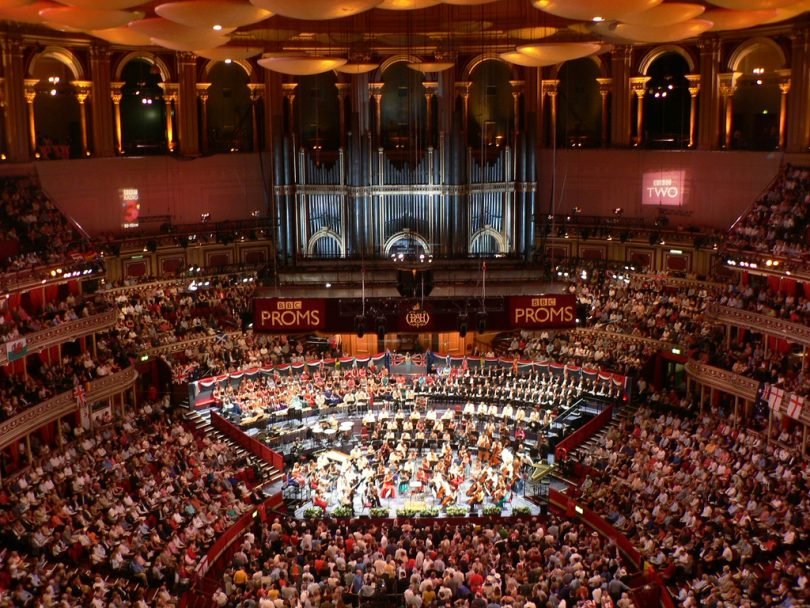 I confess: I have never even seen the Last Night of the Proms. Those that have seen it, will know that for a Proms rookie I was in for quite the experience. Those that haven’t, I’m torn between recommending you watch it and advising you to steer clear.

Before I progress however, I feel I should probably get the big Brexity elephant in the room out the way. In a night that is seen as quintessentially British, it was hard to ignore the sea of EU flags and blue and yellow starred berets that flooded the Royal Albert Hall.

It would have been impossible to ignore the political undertones even if I’d wanted to. Outside, a group of activists wearing EU t-shirts bearing the slogan “Thank EU for the music” handed out flags to offset the monopoly of Union Jack’s. A male tenor wore an EU bowtie. Even the conductor’s final speech gave reference to the power music has to heal divisions and bring people from around the globe together. He would be right on the balance of last night’s experiences.

Despite the array of world flags and thinly veiled references, the atmosphere was notably positive. The grandiose size of the Albert Hall was reduced to intimacy and joviality; helped by the audience standing and vigorously waving flags. Screaming hello to the other countries watching from around the world (an apparent tradition of the Proms) induced my seated neighbour to almost fall off her swinging chair in glee.

Spend 30 seconds with the extraordinary @JessGillamSax at the Last Night of the Proms. Live now with Darius Milhaud's extraordinary 'Scaramouche'. #LNOP #LastNightofTheProms pic.twitter.com/hQ4gacPxuT

The catalyst to trigger the second, and most entertaining half of the evening, was the introduction of 19-year-old alto/soprano Saxophonist, Jess Gillam. Her leather trousers, glittered face and spirited playing seemed at odds with the traditionalist pieces that had come before, and this appeared to loosen up the event somewhat. She was particularly excellent when performing Modere from Scaramouche by Darius Milhaud; a debut of the piece at the Proms. If I were to advise a Proms virgin like myself on what to watch first, it would be that.

On the other hand, as far as I’m aware, the Last night of the Proms wouldn’t be so if it wasn’t for the strange juxtaposition of a rather serious environment engaging in heckling, sing-a-longs and the occasional mid-performance-blow-on-a-kazoo. Despite all the fun, I couldn’t help but feel there was a faux-silliness to it all: a kind of pretence. There was something particularly ironic about a room full of people waving EU flags, in a protest at our chosen political path, vociferously singing along to Land of Hope and Glory.

Just for future reference, this is how you do 'Land of Hope and Glory'.#LNOP #LastNightOfTheProms pic.twitter.com/Xxy7kxI9qH

I suspect a less cynical man would not have struggled to enjoy the occasion but for myself it was difficult to remove such a nationalist event from the lens of the current political landscape. Evidently, the other 5,000 people in the room with me did not agree. The array of talent on display, in my first visit to such an incredible venue meant I left enjoying the evening and would ultimately recommend for you to watch it; although the politically minded among you may find some of it hard to swallow.