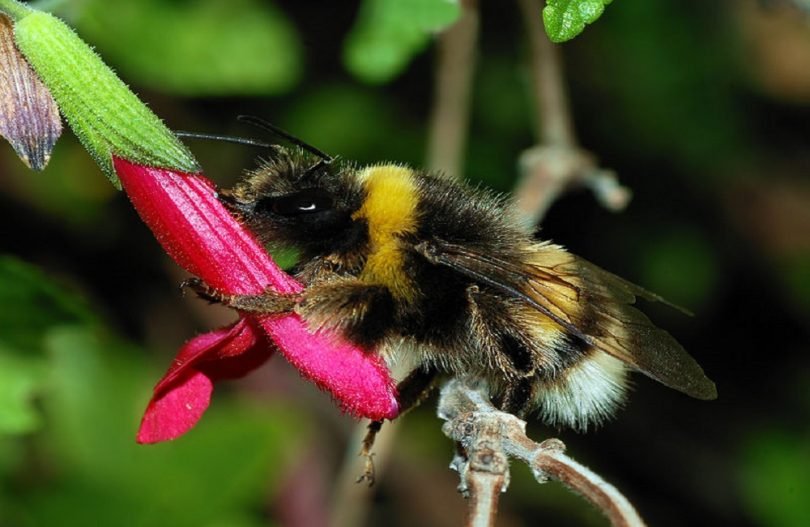 “A recent physical effect of Global Warming has occurred: Bees and their flight to extinction,” says scienceabc.com on the matter. According to sos-bees.org, bees have been on the decline of extinction since 2006.

The extinction of bees is more of a chain reaction it seems:

Climate Change, or specifically in this case, rising temperatures with in the earth’s atmosphere, are being pointed to as cause for this occurrence.

“As an example of how environmental cues for the timing of significant life cycle events might become uncoupled…when it gets warm enough outside for them to maintain a temperature of 93 degrees, they start laying eggs around the edges of the cluster, and the cluster begins to expand…but if a single cold, cold night in March intervenes…then eggs at the edges that the workers can’t keep warm will die,” writes Rebecca Lindsey of the Earth Observatory at NASA.

The bumblebee also has things that can work to its advantage to help against extinction by other means that might be presented to it.

Bees have a black and yellow striped body. These colors help the bee blend with flowers and surround areas in nature from predators that mean it harm. They are often attracted to bright colors as well.

They have also been known to have adapt to their environment behaviorally.

The bee will know how to pollinate from other members of the hive and by instinct but when the bee goes to get honey from pollen in flowers, the honey bee may sometimes drop honey and cause more flowers to be more pollinated.

The honey bee in this situation is a adaption that it will do in front of potential mates.

Other than the threat from a rising temperature in the climate, the Bumblebee is also known to use its stinger in the face of possible harm to itself or family. When it does use its stinger, it does die, but either by protecting itself in the process or someone close.

According to the United Nations Environmental Programme, the food creators create between $235 – $577 billion (£189.8-£466 billion) per year and “annual global food production relies on direct contributions by pollinators.”

The programme's website also says that “nearly 90 per cent of all wild flowering plants depend at least to some extent on animal pollination,” and that 75 per cent of world crops come from the pollination that comes from the bee.

"Pollination service are an ‘agricultural input’ that ensure the production of crops," says José Graziano da Silva, Director – General, Food and Agriculture Organization of the United Nations (FAO) according to the United Nations article on Bee Extinction. "All farmers, especially family farmers and smallholders around the world, benefit from these service. Improving pollinator density and diversity has a direct positive impact on crop yields, consequently promoting food and nutrition security. Hence, enhancing pollinator service is important for achieving the Sustainable Development Goals as well as for helping family farmers’ adaption to climate change."