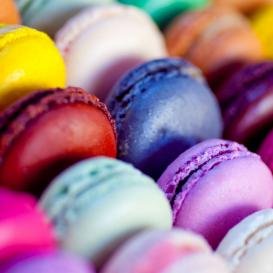 ​Though Paris is famous for many things from museums to architecture, from cheese to pickpockets, macarons are in a league of their own. Described by a friend as little bites of diabetes, they are heavenly sweet treats that come in an array of different flavours and colours.

In the display windows of boulangeries and patisseries all over France, as well as being available in my local Carrefour, they were inescapable. Not that I wanted to escape them, of course. Trying as many different flavours without doubling my weight was my goal whilst I was in Paris. I definitely achieved the former. No comment on the latter.

Though I was lucky enough to be in Paris for a month and try a lot of different places, if you’re there for less time or want to go straight for the best here are my top five places to get macarons in Paris. Bon appetit!

1. Pierre Herme: several locations, but the one at 185 rue de Vaugirard 75015 Paris was my nearest and they are one of the few selling croissants, too.

The absolute master of macarons, any fan of the delicate French sweet has to make the pilgrimage here at least once in their lifetime (if not multiple times). The macarons themselves are moist and melt in your mouth and flavourful but not overpowering, always leaving behind a delicate and moreish aftertaste. A range of flavours means there are some classics that you cannot go wrong with (the salted butter caramel is velvety and rich) as well as some more unusual combinations (definitely try the olive oil and mandarin orange, or the lighter jasmine and jasmine tea).

The more unusual yogurt range is also worth trying, with the usual ganache in the middle being made with yogurt and therefore tasting lighter, less rich and more summery. The Velouté Ispahan is the winner in this range, blending yogurt, rose, lychee and raspberry.

With these macarons being made fresh, there seems to be general consensus that they are superior to Laduree, with Herme being termed the Picasso of Pastry. Having not tried Laduree yet, I can’t pick a side on this date just yet, though.

Though famed for macarons, the Ispahan croissant cements Pierre Herme’s place at the top of this list. There for macarons or not, this is a must try. It is a buttery, flaky croissant with rose almond paste (blending delicate sweetness and nuttiness), raspberry (sweet and sharp) and lychee compote (summery and refreshing). With rosewater glaze and raspberry pieces on top, this is the single best thing I ate in Paris.

Thankfully, there is a Pierre Herme store in London. Never have I been so happy to live in London.

Though not quite so easy to get to if in central Paris, this patisserie and chocolatier in Montmartre is worth visiting. The flavours rival Pierre Herme’s, which is no easy feat, and are packed with rich ganache centre.

The strawberry and jasmine macaron has complementing flavours that balance each other out which was surprising considering how delicate jasmine is, and I will forever regret not trying the peach rosemary or passion tarragon flavours.

However, the one not to miss here is the caramel coated with dark chocolate. The caramel macaron is sweet and buttery, but has been enrobed in dark chocolate making it something a little different to the usual classic combination of chocolate and caramel.

The one downside here would be the vanilla, which a friend of mine tried. It tasted more like Battenberg. Not a problem if you’re a Battenberg fan, but disappointing if you want cleansing vanilla. And I abhor Battenberg, so this was almost unforgivable. Note: I said almost. The chocolate caramel meant that Christophe Roussell redeemed itself.

Located just near Solferino station and just a stone’s throw from the Musee d’Orsay (definitely worth a visit, the current Dolce Vita exhibit and the Van Gogh paintings are a brilliant), this macaron and chocolate shop has a beautiful window display.

With flavours like blood orange and grapefruit rose, there are a lot of different flavours and colours to choose from. The cherry lavender was my favourite, though the mint and white chocolate was a let down. Though it should have been a brilliant flavour combination, usually sickly white chocolate should have balanced with aromatic mint, it came up bland. Neither flavour was dominant, and it fell a little flat. The cherry lavender was on par with flavours at Christophe Roussell, though, and makes it worth visiting.

Famed for their hot chocolate (the best I’ve ever had, definitely try it and don’t go for the iced version, it disappoints), the pastries, croissants and eclairs are all divine. The Pompadour macaron is beautiful, both aesthetically and taste-wise so you’ll be winning both Instagram and hunger-wise.

The Pompadour is a Barbie pink macaron with pistachio cream that is light and nutty, with a sweet yet sharp honey-raspberry compote that bursts with flavour and fresh raspberries. The actual macaron biscuit is a little chewier than I’d prefer, but the blend of the flavours works brilliantly. It is a little more on the sickly sweet side, though, so if you haven’t got a very sweet tooth, go for something with more fruit or a croissant.

That isn’t a typo, and I do actually mean McDonald’s. Paris have got it right and have a McCafe which sell croissants, cheesecake and macarons. They’ve missed a trick by not calling them McArons, though.

Quick side note: They also have Oreo McFlurry’s. That was a revelation; I’m dreaming of the day England catches on. Go for the Oreo McFlurry with chocolate sauce, not caramel. It’s more like hot fudge sauce and tastes like sugar, chocolate and chemicals. You won’t regret it.

Not comparable to Pierre Herme, the macarons are still worth trying. Sticking to more classic flavours, the caramel is the best choice as it has an almost gooey centre and is sweet, rich and buttery. The chocolate is a close second, and the vanilla ganache tastes like ice cream which is moreish, even if they are all a little on the chewy side.

Though not the epitome of French macarons, they are only a euro each and taste sweet and like the flavour they promise, so no complaining!