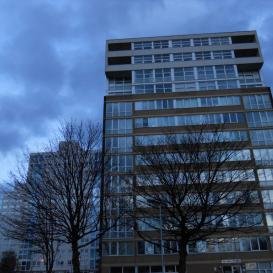 Last Tuesday I stumbled across the BBC’s ‘The Estate We’re In’, a documentary piece on the reality of “regeneration.” In this case it was Hendon under the spotlight, as the secure tenants faced an uphill battle to convince local councilmen to either pay them the value of their house or to let them remain, in the place which some of them had made their homes in as far back as the 1990s.

The conversation about gentrification versus regeneration is not a new one; it has been discussed at kitchen tables, housing offices and behind closed doors for years now. However, the conversation has been pushed into the spotlight once more as long term residents are driven from areas deemed too urban, too run down, too ugly and too poor to save.

One of the interviewees in the documentary snapped up a new, one-of-a-kind, lake-view high rise – notice the labelling changes from estate to high rise as the demographic of home owners changes. He said he was simply unaware that people were picketing about the situation but quickly shrugged off the matter, claiming their “accommodation is already in disrepair” and that they’d be moving to somewhere “better.” Unfortunately, he did not explain where, or how, this “better” accomodation was going to materialise.

Places such as Hackney, once typecasted in the news as a dangerous place full of terrible, hooded young men, is now one of the most in demand areas in London. Houses, which at one point were rented for a few hundred a month, are now going on sale for around one million pounds.

Many people strike back against the regeneration argument, whether talking about Brooklyn or London, claiming that it is a great concept. These people include councillors that had the audacity to laugh at a rightfully angry tenant, simply trying to voice her opinion during a meeting at Hendon’s Town Hall.

Admittedly, regeneration creates jobs, brings environmental and socio-economical  benefits to areas that were formerly run down. Places that were, in other words, simply not rich enough, impressive enough and definitely not worthy enough for councils to actually push money into for those who actually lived there for years. Yes, regeneration does improve certain areas but why do councils only seem to be concerned about communites that have attracted the middle and upper class?

A key issue highlighted by the situation, and lamented from Brixton to Manchester, is the loss of community. One former tenant, forced out of his home and the city he know so well, for a meagre £20,000 – a choice many older people are also coerced into making. What struck me as particularly inhumane was the total lack of help from the council, not even in the form of removal men costs or packing assistance. Speaking as someone who has personally experienced the callousness of a local housing association, and the complete disregard for human life or the well-being of the homeless, I know how difficult it is to pack up in your 20s and deal with the bureaucracy of these institutions.

As whole communities disintegrate and the hearts of many cities are destroyed, our government still invites overseas investment for high cost housing, allows the poor to become displaced and ignores how homelessness continues to rise. The BBC’s documentary ends with this text: By 2025 all homes on the old estate will have been demolished. Sobering facts.