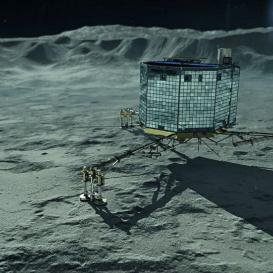 Reliability, cleanliness and extreme environment. These are three aspects of space engineering that are worlds away from anything that is built for use on Earth.

When you’re driving your car and something goes wrong, you usually break down. You ring the breakdown service and help will come to your aid in up to a few hours time, depending on the weather. It’s annoying, but it’s not the end of the world.

Anything that goes up in to space is not so easy to reach. Once a space probe or a satellite is sent up there, it can be quite a hassle to fix anything that goes wrong; that’s if it is possible to fix at all. Philae, the Rosetta space probe that landed on a comet this year, was travelling though space for a decade. Engineers need to build something that is going to last ten years in space and still work at the end of it.
“When you launch something in to space, it’s gone,” said Berend Winter, Head of Mechanical and Thermal Engineering from the Mullard Space Science Laboratory (MSSL) at University College London. “You can’t touch it anymore.”

This means that space engineers have to think through every possible step of the making of probes, satellites and rovers incredibly meticulously. It is test, re-test and test again in space engineering, as reliability is paramount.

In Mr Winter’s words, “you design it in such a way that you can’t imagine it every going wrong.”

“It’s impractical to launch another satellite to go up there and fix something,” said Jorgina Busquets Corominas, who has worked on satellites at Airbus Defence and Space. This is because it would cost huge amounts of money to launch another mission, plus there’s a delay with communications. For example, it takes ten minutes for the Mars Rover to receive commands from Earth.

The further away the mission is happening, the longer the delay, which can sometimes be days. Imagine a car engineer working on fixing an engine, but he has to wait several days in-between each part of the process to see whether it has worked. Suddenly it doesn’t very realistic.

There are also differences in the physical ways on how things are built. The environment of space is very different from anything on Earth. Here, we have temperatures that range from plus or minus 50 degrees in extreme environments. In space, the scope can go into the hundreds.

“When you are orbiting the earth, if the sun hits you, you are very warm,” explained Ms Busquets Corominas. “But if the sun doesn’t hit you, it is super cold.” As a result, anything in space has to be built in materials that can withstand these extreme fluctuations in temperature.

“Glues are another material which needs to be closely controlled and monitored,” said Tom Hunt from the MSSL at UCL. “Samples for all glue used on a flight item are dated and stored until at least the project is successfully launched.”

Another factor is considered of the materials which space engineers refer to as cleanliness. This means that the materials do not release gas when they’re exposed to a vacuum; a space that contains no matter. Space is not a perfect vacuum, as there are a few atoms floating around, but it is pretty close.

There are many optical systems on everything that is sent in to space, be them satellites, probes or spacecrafts. Some are telescopes that view stars further away and take photographs, and others are used to show which direction it is pointing. Optical surfaces tend to be very cold, so if a gas is released from materials, the gas then condenses and fogs them up, like breath on a cold window.

“Missions have been lost for that reason,” said Mr Winter. “If you have a star tracker that is disabled because it is fogged up, or iced up, you don’t know which direction the spacecraft is pointing.”

Materials need to be unaffected by temperature and also able to endure a difference in forces. We take gravity and friction on our planet for granted. When we jump, we know we will come back down again. When we’re pushed, we have the force to stop ourselves moving. In space, this is not the case.

Ms Busquets Corominas talked through a few differences. She said with a jump that the same action wouldn’t be possible on Jupiter for example, because gravity is far too great. Strength is a factor that has to be tested under these conditions. With a push she explained that in space, I would float in that direction forever because there is no resistance to stop me.

Things travel at such an accelerated rate in space because of the lack of friction. The moon for example orbits the Earth at 2,288 miles per hour. The comet that the Rosetta Philae probe landed on is hurtling through space at almost 84,000 miles per hour. “It’s a massive achievement that Rosetta was able to be at the right place at the right time” said Ms Busquets Corominas. Not only did Philae have to land on something that is going incredibly fast, but it had to do so in a way that it wasn’t pulverised in the process.


The list of requirements is very long for a space mission. Mr Winter said that they can be “hundreds or thousands of points long and you have to meet all of them.”

Even when all the requirements are met, engineers that work on satellites still face a problem of how it will get in to space and in to orbit. There are a limited number of launchers that carry satellites up there, and they have a particular shape and therefore can only fit a certain mass. Ms Busquets Corominas was in charge of the compromise. She made sure that the engineers working on the different areas knew the requirements they had to meet but also that they had to do so with a limited available space.

Engineers being in charge of their individual areas mean that there are inconsistencies in what each believes should have priority. For example, those working on the solar panels will say that they have to have to take up a lot of room because otherwise the satellite won’t be able to charge properly and shut down. Those working on the communications will say that without a certain sized dish, the satellite won’t be able to receive commands. But of course, they can’t have it all.

Space engineer Lewis Farrimond is familiar with this and said that there are “huge teams and a huge range of specialists in their fields” when working on a large space mission, such as Rosetta.

The complexity of the projects means that everything is reliable as it can possibly be predicted to be. Things go wrong on space missions, said Mr Farrimond. “Like with the bounced landing of the Philae probe.” – but this is not because of a lack of testing; it’s because of the unpredictability of space itself. Mr Farrimond added: “I think the team did a fantastic job considering the risk involved in their project!”

We are exploring areas that are completely unique to anything we experience on our planet, so stringent measures aren’t just important, but a mission couldn’t happen without them. “In the car industry they’ve adopted some of the quality control schemes from the aerospace industry,”
said Mr Winter. “And the reliability of cars is much, much better for it.”

Mr Hunt said that tests and provisions are made for there to be as little risk as possible in space missions. He then revealed: “But there are bound to be a certain amount of fingers crossed.”