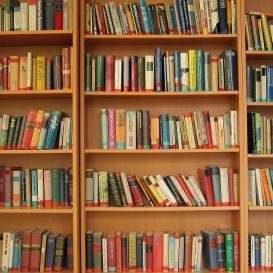 It’s that time of year again, when the shortlist for the Carnegie Medal has been announced and the book community are all preparing themselves for the big day. The winning author receives a gold medal, £500 of books to donate to a library of their choice, plus they now also receive the £5,000 Colin Mears Award.

So which eight authors are contending for the title this year?

Sarah Crossan’s book One features on this year’s shortlist, a book which is one of my own personal favourites. It features Grace and Tippi, conjoined twins, who are being faced with having to go to school for the first time. Neither have any idea what lies ahead, especially not the life-changing decision that could tear them apart. Sarah has been in this position before; her other book The Weight Of Water was shortlisted for the Carnegie Medal in 2013, plus One also features on the YA Book Prize shortlist this year too!

Just got first real life copies of paperback of #onebook and oh,
How do love thee? Let me count the ways ???????? pic.twitter.com/5P9yAj4gG0

Another notable shortlisted title is The Lie Tree by Frances Hardinge. This book made headlines earlier this year when it became the first children’s book in 14 years to win the overall Costa Book Of The Year Award in 2015, plus it’s shortlisted for this year’s YA Book Prize as well! Described as an “imaginative, darkly gothic Victorian mystery,” it’s definitely a book to read.

Another Costa Book of the Year winner features on the shortlist too: Five Children on The Western Front by Kate Saunders won the Children’s category in 2014, and is a sequel to Five Children and It by E. Nesbit, where the five children have grown up, and the war’s impact is about to be felt right at the heart of their family. The book was shortlisted for The Guardian Children’s Fiction Prize 2015, and has been received extremely well by critics.

Here is the #CKG16 shortlist https://t.co/dbw5rztHOW

Alongside those too is The Ghosts of Heaven, which was shortlisted for the 2014 Costa Children’s Book Award as well. For as long as time has existed, the spiral has existed, and to find its meaning you must first follow infinity. The book consists of four short stories, with four different characters, all taking steps forward in their own lives from the same location. None will ever return to the same place, but it’s from there that their stories begin.

Patrick Ness, writer of upcoming Doctor Who spin-off Class for BBC Three, makes an appearance on the Carnegie shortlist with his latest title, The Rest Of Us Just Live Here, a book that asks an important question: what if you weren’t the chosen one? What if you were just like Mikey, who wants to leave school, go to prom and lead an otherwise average life? The book leads Mikey on to try and find the extraordinary from the very ordinary.

Alongside them, Jenny Valentine’s Fire Colour One also makes an appearance, a book that tells the tale of Iris, whose best friend Thurston is on the other side of the world and her millionaire father is dying. Her mother has set out to get her hands on the priceless art collection that her former husband has. However Ernest, Iris’ father, has secrets he wants Iris to know, and the truth often has more than one way of coming out in the end.

With an average Goodreads rating of 3.94/5, it’s also one of my personal favourites as well.

Lies We Tell Ourselves by Robin Talley takes readers back to 1959, where the battle for civil rights is raging and Sarah is going to school as one of the first black students at the previously all-white Jefferson High. Nobody wants her there. Linda’s supposed to hate her. But the more time they spend with each other, the less it all matters. But as they learn, it’s easier to fight something on the outside than something in your own heart. This book is a really powerful novel and joins the list of my personal favourites on the list.

And last but by no means least is a book that begins with Shelby being hit and having her leg shattered in a car accident. But it doesn’t just shatter her leg; when her mother comes to pick her up and drive her off into the night, her entire world is shattered. She begins to feel like criminals on a road trip, but everywhere she looks there are people telling her not to believe. So the big question for Shelby in There Will Be Lies by Nick Lake is this: if the person who raised you can’t be believed, who can you trust?

The big day is on the 20th of June, so there’s plenty of time to read the shortlisted titles before then.

What do you think of the nominated books? Have your say in the comments section below.