Bella the Tibetan, from Mansfield, Nottingham with kind permission from her Mum Christine, agreed to speak to the frivolity section here at KettleMag. In a charming interview she reveals her tyical day, her love of other animals and her mischievious nature.

I see from your twitter feed that you have 4,232 followers and counting. What was it that persuaded you to take to twitter to express yourself?

To be furhonest, it was a friend of mum’s who she worked with at BBC RadioNottingham who suggested to mum that I might enjoy being on furTwitter

Your twitter bio states that you are betrothed to Harvey da Tibetan. How did you meet…and who did the proposing? Is there a ceremony in the offing?

Oh, Harvs did the proposing. He fell in love wiv me profile pic, We gonna have a long engagement – we saving up fur a vewy speshul wedding 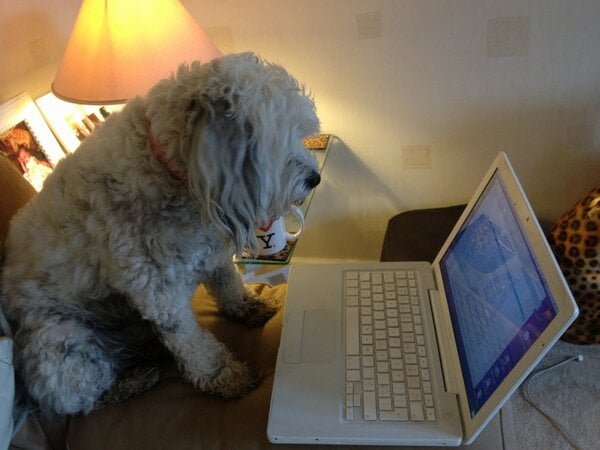 Could you describe a typical day in the life of Bella the Tibetan?

Well, I sleep in a vewy comy basket in the kitchen. Dad comes downstairs to make mum a hot dwink,early morning, and that’s when I run upstairs to give mum morning kiss. Then Mum&Dad have brekkie whilst watching the news, I sit inbetween them and have a morning snack, and I pester them to let me lick cereal bowl. If they ignore me, I give them a pawsmack. Then dad takes me a walk, after which I have a sleep. Most days I get to play with next door’s dog, lickle Betty. She comes through the hedge and we chase each other round & round the garden. She a pwoper lovely mini schnauzer. I have dinner at 6 pm – and always have a bedtime snack

Come out ya lickle beggars! I dus tormentin da guinea pigs in PetsatHome whilst mum buying me some treats, bless her pic.twitter.com/POIUyJ3o5f

Your tweets occasionally show a disgruntled Bella, say when you have been left ‘home alone’. What do you like to get up to when you are left in charge of the empty house?

Mainly I sit in the armchair near the window guarding the house – a vital job – though sometimes I doze off. Mum always leaves me a snack – I call it a guilt snack. I so furcited when they arrive home and always fetch them one of my many toys. They alwaz pweazed I kept out any intruders.

What’s the naughtiest thing you have ever done?

I have noticed in the past that your 2-leg brother Richard Bacon has been somewhat dismissive of dogs, particularly when being asked an opinion on his much missed ‘Help’ section on 5 –live in the afternoon…yet he devoted a whole chapter of his A Series of Unrelated Events book to you. Were you surprised?

Mum surpwised that he is dismissive of dogs coz when he was a child, he and his two sisters had a Yorkshire Terrier called Scamper – who Richard adored. He slept on Richard’s bed, went on family holidays, and efurrything. Richard’s wife nefur had a dog though, so that doesn’t help, Richard thinks dogs on Twitter all a bit of a joke – suppose that’s why I featured in his book – give readers a laugh. How rude is that!

Have you ever thought of writing a book about your life?

Tell us about your time in the theatre. I believe you took to the stage in Nottingham, was it last year? Was this your first encounter treading the boards? How did it feel and will there be more theatre in the future?

I was in a production at Nottingham’s Theatre Royal last year called ‘The Play That Went Wrong’. Didn’t enjoy it much coz they took me away fwom mum and I wanted her on stage with me! I have been on ITV’s This Morning a few times – testing dog food, modelling dog coats, etc .Mum enjoys it more than me – that’s a fact.

You are no stranger to winning competitions though, having won Armitage Pet Products dog model in 2010. Have you ever thought of applying for Britain’s Got Talent?

I think I could become a Pudsey look-a-like – and I can do twirls and walk on my hind legs. I not clefur enough to enter BGT

What is your favourite food?

Do you prefer walking in the woods or the beach?

Beach is best coz. I run straight to the sea and paddle. I only paddle though – I no like swimming and waves are scary. I love being chased by other dogs

Your 2-legged brother and sister work in radio and television, have you ever considered this type of work?

Not really – I’d be looking for mum all the time! Furobviously, my appearances on This Morning have been via a good word from 2leg sis, Juliet. She the youngest of my two 2leg sisters

Your Mum has a lot of little 2-legs to play with now. Do you enjoy helping her with these duties?

They, all think I real live teddy bear, and all the family think I so good wiv the six licke 2leg folk, but it does get pawshausting, and I sleep loads when they all gone

What fur would want ta look after Lickle 2legs when dey do this ta ya pic.twitter.com/J8qaardE3E

Here at Kettle there are many cat lovers. What is your feeling about cats?

Oh, cats only good fur chasing. Mum did have a cat before I came into the family. There be photos of him in our house – he was a big gingerhead – a bit like furTwitter’s @CabinCutey. I call him ‘Cabs’ and I only efur tweet him on a Fwiday. Cabs is a bit stoopid you see, and we have fur arguments, but we alwaz nice to each other on a Fwiday.

Are there any twitter campaigns that you have been involved with? Where do your passions lie?

Me & Mum together hate any animal abuse. We against fox hunting, appalled at the killing of Cecil the Lion and any trophy hunting, and we think puppy farming should be banned. Those poor mummy dogs that be made to have lots of litters of puppies, in quick succession, to make loads of money, and then cast aside. It just so sad.

Where is your favourite place that you like to visit with Mum?

Whitby. Mum&Dad have a flat in Whitby and I get to do beach zoomies. We walk to Sandsend and go to the dogfwiendly ‘Hart’ pub. The downside to that is that mum alwaz has the crab sandwiches – and I hate crab!

By the way, I have a Pet Passport and we off to France in a few weeks. This will be the fourth time I been through the chunnel! Whitby still the best though.

Our thanks to the gorgeous Bella for this insightful interview. If you wish to follow Bella you can find her on twitter @BellatheTibetan