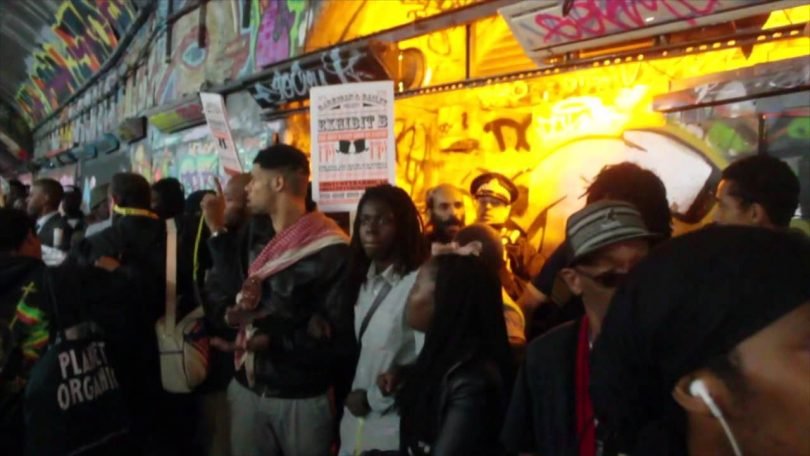 The Barbican Theatre have willingly and deliberately chosen to play host to Brett Bailey’s installation “Exhibit B.” Bailey has claimed that the show intends to confront European notions on the issue of racial supremacy and the current plight of immigrants.

However, there is not one still of the exhibition that cannot be seen as utterly racist.

The Barbican is complicit in what is essentially a cultural appropriation by a South African white man for a largely white, middle class audience. Ideally indicated as a ‘critique of human zoos’ and ethnographic displays in which black people where literally objectified as things of scientific curiosity, Bailey has outrageously reinvented the objectification.

The only difference is that this time, instead of a scientific audience, Bailey invites the voyeuristic pornographic gaze of the arts audience. People visit galleries to enjoy art, to be provoked into thinking, and overall, for an ideal experience. This art is confrontational racism for the sake of a reaction. This is not a subject to steal your reaction from, to further your career from.

If you make an art installation about slavery and white people like it, it's not a good work of art.

It is 2014. I can explain in a million ways why a white man reinventing (and profiting from) the reduction of living, breathing black people into basically mannequins, is wrong. But I will start with this simple statement.

Racism is not dead. Racism is living and breathing.

I use America as an example because it is rampant, and even a person wearing the biggest blinkers can see that racism is a serious issue. A black mother was imprisoned for leaving children in a car for forty minutes after a job interview ran over.

She couldn’t find a babysitter and had to leave them alone for what she thought was 15 minutes. She now faces 8 years in prison for felony child abuse – despite the fact her children were uninjured.

Comparative cases reveal far worse acts committed by white people – but instead of jail time they were awarded community service. Store chain Barney’s have recently paid a fine of $525,000 (£321,565) because they were racially profiling customers and disproportionately incarcerating ethnic minorities.

In the UK, the government have introduced a ‘voluntary’ code of conduct for the use of stop and search powers after it became incredibly clear that once again, a majority of minority ethnic people were stopped under the powers. A voluntary code from a body that can mandate something into law says everything.

Individually, it cannot be definitely said that these cases and attitudes are all racially motivated – but they indicate a pattern that has been present since slavery. In western culture, black people are still second class citizens.

The Barbican is culturally complicit in reinforcing this message. They are presenting black people tied up and in chains, notably without challenge. They make no effort to separate themselves from this. Under the guise of fine art, everything is okay. If it’s to start a conversation, well, then, surely it’s fine.

At this time, no, I have not seen the exhibition. I am a black female. Seeing another living human being in slave chains at the direction of a white south-african man makes my skin crawl. I could not bring myself to even enter the building, and I try not to perpetuate my own oppression by supporting the people who do.

I’m here to provide a solid reality check to the curators of this exhibition. This is not okay. Racism is still real. This is not a posthumous discussion of what life was like in the same way as if we’re investigating Pompeii.  This is stealing a story from the people who lived it, and presenting it for some sort of gluttonous indulgent satisfaction. This is perpetuating racist stereotypes.

Again, for the record, this is wrong.