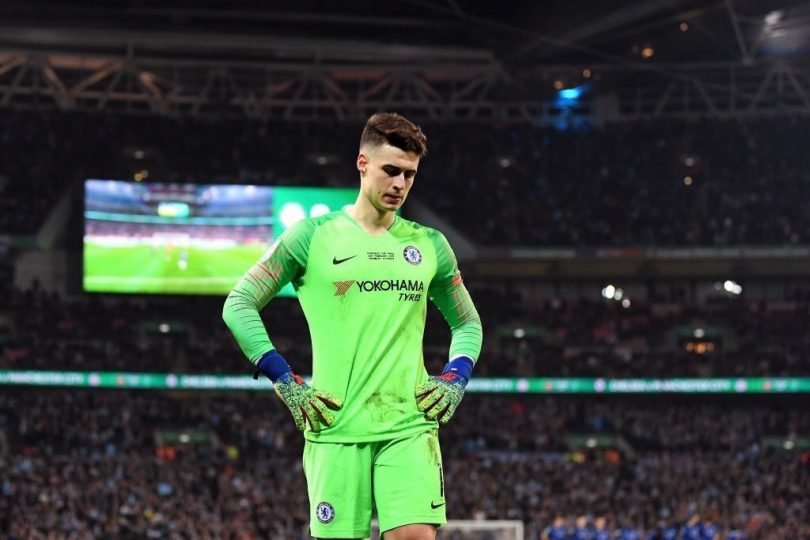 On Sunday we witnessed the first major trophy of the season being won as Manchester City defeated Chelsea on penalties to win the Carabao Cup. However, City’s victory was overshadowed by what can only be described as an unbelievable act of disrespect from the Chelsea goalkeeper Kepa Arrizabalaga as he refused to be substituted late in extra time.

With the clock closing in on the 120 minute mark, players’ minds start to focus on penalties, none more so than the goalkeeper’s. A penalty shootout in a cup final, this is their time to shine. Nevertheless, Blues boss Maurizio Sarri decided to substitute their number 1, after he had cramped up twice in the second half of extra time. What followed was truly shocking to both the fans at Wembley stadium and the millions watching a home. Kepa simply refused to come off. Like a child disobeying his parent, the Spaniard just stood there almost to say “If you want me to go you’re going to have to drag me off.” He clearly felt as though the injury was not significant enough to force him off, but when your numbers up your numbers up. I can understand where Kepa is coming from; he has fought for 120 minutes, made important saves in the game and now he is about to have the chance to become a hero. Regardless, you cannot refuse to be substituted. It is a sign of utter disrespect to your manager, the coaching staff and your team. He is not above the club nor the manager and cannot overrule decisions. I felt genuinely sorry for Sarri. He is under immense pressure as it is and then he found himself in an impossible situation. After confirming to referee Jonathan Moss that the substitution had been cancelled, the Italian had a moment of genuine rage as he clearly could not believe what was going on. The Chelsea boss even walked towards the tunnel which led Sky Sports commentator Martin Tyler to say “he might be walking away from the stadium, is he walking away from the job?”. Clearly everyone was in shock from the situation that was unfolding.

The 23 year-old won the war of wills against his manager and got his wish to participate in the spot-kicks. Perhaps his adrenaline from what had just happened got too high as Arrizabalaga made a mess of City’s first penalty. A tame effort by Sergio Aguero managed to squirm under the keeper’s arms and nestle into the bottom corner. He did manage to save Leroy Sane’s penalty, but it was in vein as Chelsea missed twice meaning the Sky Blues were the champions. What is even more frustrating for Chelsea fans is that the keeper who was waiting to replace Kepa was 37 year-old Willy Caballero, who actually has a wonderful record with penalties and in penalty shootouts. The Argentine has saved 11 penalties in his career, as well as stopping three in the Carabao Cup Final shootout back in 2016, for Manchester City! That certainly would’ve been an interesting twist, and perhaps one that went Chelsea’s way.

For me, questions have to be asked of the Chelsea players. Is it their duty to tell Kepa to leave the pitch? Perhaps. Only David Luiz approached the keeper but surely that responsibility somewhat lies with club captain Cesar Azpilicueta. He should take charge of the situation and command his goalie to get off the field and allow the substitution. Those crazy few minutes really did put a dark cloud over what was a very impressive Chelsea performance. After City had thumped them 6-0 in the league just two weeks ago, many were expecting the West London club to be embarrassed once again but the Blues frustrated Manchester City and would’ve been deserved winners. Whether the ordeal affected the players’ mindset is hard to say, but it certainly was a defining moment in the match.

Maurizio Sarri says the Kepa substitution confusion was 'a big misunderstanding' because he thought the player had cramp. However he says Kepa was right that he could continue although the way he went about it was wrong. Sarri says he needs to talk to Kepa now. #CHEMCI

It will be interesting to see what happens at Chelsea football Club in the next few days. With a vital game against Tottenham coming up on Wednesday there is no time to dwell on this result but I feel as though this could be a significant moment in both Chelsea’s season and Sarri’s reign. It reminds me of when Jose Mourinho famously fell out with club doctor Eva Carneiro during Chelsea’s season opener back in 2015. The Portuguese manager never recovered from that dispute and subsequently lost his job in December after Chelsea had lost nine of the 16 league games, leaving them one point above the relegation zone. Will this embarrassing dilemma between Sarri and Kepa result in more turmoil at Stamford Bridge? The Italian has a big decision now whether to play Kepa on Wednesday in what is such an important game for Chelsea in their hunt for a top four finish. If he starts does that show Sarri has lost the control of his team or the respect of the players? The fact that Kepa won that battle shows where the power really lies at the club. What must the board and owner Roman Abramovich be thinking of this? I personally would drop Kepa for the game against Spurs. A player cannot show that level of disrespect and get away with it. Sarri must show his authority and send a message to his players; I am in charge here.

Ultimately it is a cup final defeat and they have spurned the chance of winning some silverware which will pile the pressure not only on Sarri, but the entire Chelsea squad.