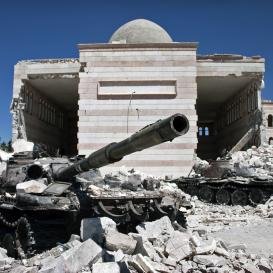 A senior official from the main opposition group in Syria, Saudi backed ‘High National Committee’ (HNC), has said the current cease in hostilities in the country was in danger of collapse and, “complete nullification” due to attacks by government forces.

The HNC said the cessation had been broken by the Syrian government 15 times, and there were further violations by Russia and Hezbollah, allies of Syrian President Bashar al-Assad.

Asaad al-Zoubi, head of the HNC’s delegation to the peace talks, was not positive about the future of the current halt in hostilities. He said, ”We are not facing a violation of the truce…we are facing a complete nullification”

“I believe the international community has totally failed in all its experiments, and must take real, practical measures towards the regime.”

What these practical measures might be, he did not explain.

The current cessation began on Saturday and was drawn up by Russia and the US.

U.N. Secretary-General, Ban-Ki Moon, said he believed it to be largely holding, with a few incidents. France reported attacks on opposition forces in breach of the deal. While the Kremlin said, although the process was underway, it was never going to be straightforward.

The Syrian Observatory for Human Rights, which is based in the UK, confirmed the cease in hostilities was largely holding and there were significantly fewer casulaties. Observatory director Rami Abdulrahman said, “Yesterday, around 20 people died, both fighters and civilians. Before, there was an average of maybe around 180 people a day. It’s a big reduction in terms of human losses.”

It is hoped that the first break in hostilities since war broke out in 2011 will allow for peace talks to resume and desperately needed aid to reach up to 150,000 people in besieged areas of Syria. In January there were reports of people starving to death in the town of Madaya which had been blockaded for six months until UN aid was able to get through.

The UN wants peace talks to recommence on 7th March, but as yet, many are claiming there have been no preparations for them to start.

The current agreement covers only government and opposition fighters, jihadist groups such as IS are not included and Russia has made it clear they intend to maintain their bombing campaign against them.

Although a fighter in Aleppo said overall the level of violence had gone down.

The ‘International Syria Support Group’, led by the US and Russia, is supposed to monitor any incursions and work to de-escalate the situation.

“We have received indications that attacks, including by air, have been continuing against zones controlled by the moderate opposition,” French Foreign Minister Jean-Marc Ayrault said in Geneva. “All this needs to be verified.”