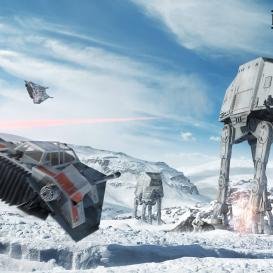 “The snow, thick and gleaming under the morning sun, crunched with the steady rhythm of the heavy boots of 40 of my comrades. Clad in uniform as white as the ground about us, we made our way swiftly towards the Rebel’s base. Hoth, a frozen waste in the Outer Rim where they thought they were safe, untouchable. They thought the Empire’s gaze was blind to their plots. The clear blue sky darkened overhead with proof otherwise; a fleet of Imperial Star Destroyers loomed menacingly amidst the clouds. Against the scrap and junk that composed the Rebel’s sorry excuse for a fleet, there was no questioning the reach of the Empire. Artillery fire bombarded the drifting husks of the Rebel’s ships, cutting through their meagre shells with ease.

The battle on the ground however may be on more equal footing. I glanced to my left and see the smouldering remains of an AT-AT; a colossal testament to the indomitable might and peerless ingenuity of the Empire, audaciously brought low by the lawless malcontents that infest the frozen hills ahead of me. An insult to the honor and mercy of the Emperor and one that we will not abide. Our mission is clear, our purpose even more so. We will destroy this insurgency and finally bring peace the Emperor’s peace to the Galaxy. As we near the Rebel’s base I hear the sound of our starfighters, behind me I hear the heavy footfalls of an AT-ST. We approach the base. I see movement in the shadow of the bunker. Slight, silent, expectant. I raise my blaster, take aim…”

Such was my immersion during this weekend’s Star Wars: Battlefront open beta, and what an incredible amount of fun it was. I, like millions of others over the weekend, descended onto Hoth for a series of epic battles between the Rebel Alliance and the Galactic Empire in one of only two game modes available over the weekend; Walker Assault Mode recreates the iconic opening battle of The Empire Strikes Back in which the Rebel Alliance attempts to fend off an attack from the Empire. Playing on the PlayStation 4, I was hooked, and that really is a first for me in particular since I LOATHE 1st-Person Shooters. Nope, don’t like ‘em.

However, Star Wars: Battlefront may have swayed me onto a whole new genre completely out of my comfort zone, and I think I’m OK with that.

The visuals were simply breath-taking; you could almost feel the sharp, wintry air of Hoth fill your lungs with every step. Even more impressive is that that developers EA DICE managed to achieve this level of graphical fidelity and get the game to run at a steady frame rate. On PS4, I didn’t detect any dips in frame rate during my time with the beta, although I may have been far too engrossed in the action to notice or care. However, in response to some criticism of the game being limited to certain resolutions on specific hardware, EA DICE have stated that “frame rate is king“, which is a healthy attitude to have towards the successful development of competitive online games, as stable gameplay is imperative in that environment. To achieve a steady frame rate in a beta and have it looking as pretty as it did is quite an achievement. Every detail was excruciating in its execution; whether it was the decals and debris dotted about the battlefield or the clutter of the Rebel base interior, all the minutiae was present to the satisfaction of fans.

The game’s visuals have come on a lot since the first Star Wars: Battlefront

If you’ve played a 1st-Person Shooter at all, even for 5 minutes, within the last 10 years then the controls should be immediately familiar. Intuitive and incredibly satisfying, gameplay is often fast and aggressive, accentuated by the fact that players have relatively very little health, adding to the sense of urgency and drama. Guns feel weighty and responsive and kills feel very rewarding.

As well as the immersive grunt work of a foot soldier, you can also find various arcade-style pick-ups littered around the map, many of which provide the opportunity for various forms of vehicular combat. Whilst playing as an Imperial Stormtrooper, I made a mad dash for one of these tokens and upon using it, I found myself in control of a TIE Fighter after a short cutscene, zipping around the sky blasting pesky Rebels from above. Then I crashed into a mountain. True story.

The immersive nature of your character crouching down to call for air support is one example of the vast array of little details that all came together to make this a very fun experience.

Aside from aerial combat, as a Stormtrooper you also get the chance to pilot an AT-ST, the infamous bipedal walking tanks. You can strut freely around the battlefield, obliterating all in your path, however be aware that you will literally be a target for every opponent as they cluster together to bring you down before you inflict too much damage on their forces. Even enemy starfighters can help destroy you.

Another pick-up allows you to briefly pilot an AT-AT itself, although this only lasts for a minute before you’re kicked back into the fray. Nevertheless, getting behind the wheel(?) of one of these metal monstrosities and blasting away as it lumbers ever forward was one of the highlights of my time with the beta, however the camera angles seemed a little awkward and the arc of fire was very limited.

Then there’s the Hero pick-ups. Oh yes, you grab one of these and you can play as either Darth Vader or Luke Skywalker and that, my friends, is a serious power trip. As the infamous Lord of the Sith, you’re limited to a brisk walk towards you enemy, deflecting blaster shots, cutting them down with your lightsaber and using the Force to choke them. As Luke you are much quicker, with the ability to leap great distances and quickly close gaps to dispatch enemies with a swing of your lightsaber. An anathema to Vader, Luke uses the Force to push enemies away. Although you may feel like it, you are not invincible as either of these characters and playing carelessly can very quickly waste a potentially incredible power-up. Remember kids, you can deflect blasters but not grenades.

Luke and Vader as they appear in the game

As mentioned previously, the objective of this particular map is taken straight from The Empire Strikes Back; as a Stormtrooper, ensure the AT-ATs successfully come within firing range of the Rebel’s shield generators in order to destroy them. As a Rebel, you must stop the AT-ATs. Sounds like a simple enough premise, but when you consider the amount of players and the essential objective of either shutting down or defending uplink terminals (depending on which side you’re on) scattered throughout the map, you have a recipe for a chaotic and extremely fun gaming experience. The terminals are used by the Rebels to call in air support, the success of which makes the AT-ATs vulnerable to attack from all sources, including standard blasters. Stormtroopers must shut down these terminals to prevent the AT-ATs from suffering too much damage and being destroyed.

Although another 16 versus 16 map was available to play, almost everyone exclusively played Hoth’s 40 versus 40 madness, especially when people figured that as a Rebel with a Snowspeeder pick-up you could recreate the iconic scene from the film when they use the ship’s tow cable to trip up an AT-AT by flying around its legs (an obvious design flaw the Empire really should’ve noticed). Bear in mind though, that even in a starfighter you are susceptible to attack, even from ground units.

As it was only a beta, there were obviously a few hiccups; some people reported issues with connectivity across all systems, which was understandable considering part of the beta testing process is to test the stability of the servers. Others (myself included) felt that for whatever reason, Stormtroopers in the Hoth Walker Assault Mode in particular had a tremendous advantage over the Rebels, so much so that 90% of matches I played over the weekend ended in Imperial victory. However, since you always swap sides at the end of every match, this wasn’t too much of a problem and only slightly frustrating; playing as a Rebel did feel pointless at times.

Overall, I’d say the beta was a promising show of what to expect from Star Wars: Battlefront when it officially releases on 19 November 2015 in the EU for PC, PS4 and Xbox One. However, whether it can justify its hefty price tag without a campaign is yet to be seen.

What do you think? Will the game be able to justify its price tag? How will it compare to the previous games? Let us know what you think in the comments section below!