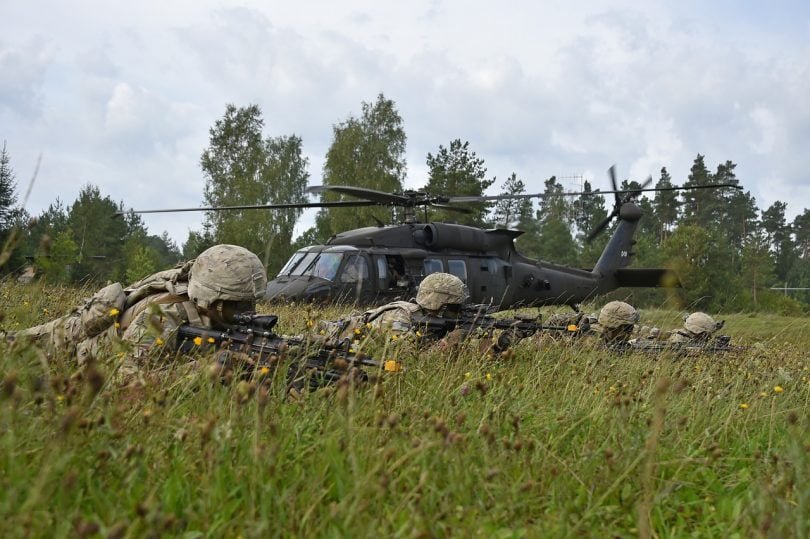 The term mercenary usually conjures up images of 15th century renaissance knights in shining armor, fighting for the highest bidder. Otherwise we tend to think of obscure Rambo look-alike veterans stimulating their lust for action in some war-torn country for a dubious employer.

Just as mercenary forces in the employ of dukes and counts was a common aspect of warfare especially in 15th century Renaissance Italy, the latter phenomenon of veterans turning to the private sector for a living is not as seldom a phenomenon today as one might think. Private Military Contractors (PMCs), as is the contemporary term for companies specializing in providing security services in conflict zones spanning the globe, have proliferated in the Middle East with the increase of armed conflict and instability in past decades, especially since the 2003 U.S. invasion of Iraq.

Blurring the lines of peace and war

Lately, the involvement of such PMCs has been thrown into the limelight once more. On May 24, Thomas Gibbons-Neff of the New York Times provided new details of the 4-hour long confrontation on February 7 between U.S. Special Forces and a contingent of pro-Assad forces in the Deir ez-Zor region of northeastern Syria, based on interviews with U.S. military personnel and documents disclosed by the Pentagon. One such detail was to confirm what has long been suspected. Whereas the 500-strong force was described as a pro-regime force responding to the Syrian government, the majority of the force was allegedly comprised of Russian PMCs, most notably the Kremlin-linked Wagner Group.

The battle which according to Pentagon estimates resulted in approximately 200-300 regime casualties occurred when the pro-regime force advanced upon a Syrian Democratic Forces (SDF)-controlled outpost containing a team of 30 U.S. Delta Force and Ranger operatives alongside local SDF-forces. After intense ground fighting and Coalition aerial bombardment the U.S. forces succeeded in repelling the assailants.

Though fears of escalation into a more direct armed conflict between the two main international actors in Syria, the U.S. and Russia, never materialized, the battle raised consternation over the prospect that the deployment of PMCs in such volatile conflict zones could mutate into something far more nefarious. As well, it raised the question whether PMCs simply serve as proxies for regular armed forces and thereby blur the lines between peace and warfare.

However, the deployment of mercenary forces to various part of the Middle East, or the remainder of the world for that matter, is not a novel element, but used to be the norm of warfare historically.

A volatile element in a volatile region

Foreign troops have historically been a staple of Middle Eastern military history and the rulers of the region have for centuries preserved the practice, and continue to do so. Of the most prominent cases can be mentioned the Mamluks, warriors enslaved from Africa to Central Asia to be the elite personal guards of various Arab potentates, eventually seizing power from latter and instituting their authority over contemporary Egypt and Syria. The Ottoman sultans incorporated the practice into their military structure as well, in the form of their household Janissary Corps of young Christians from throughout the empire, gradually establishing themselves as a central political class in the imperial administration.

In modern history Europeans have taken the lion’s share in providing recruits according to an investigate report by the Time Magazine. During the Cold War, wealthy Gulf monarchies and rulers employed former British servicemen to serve a variety of purposes. Firstly, to participate in counter-insurgency campaigns against Communist, Islamist, and other subversive dissidents, such as Major Ray Barker-Scofield fighting in Oman’s desert in 1972. Secondly, to organize efficient (and brutal) security states, with the support, either tacit or overt, of the British government, such as chief Bahrain’s secret police for three decades Ian Henderson, known as “the Butcher of Bahrain”.

In later years with armed conflicts flaring up in the wake of the Arab Spring, Middle Eastern states have increasingly employed mercenary forces to actively conduct military operations. Reuters reported, in relation to the Libyan civil war of 2011, that the Gaddafi-regime was a keen employer of mercenaries with an estimated 6.000 troops originating predominantly from sub-Saharan countries such as Sierra Leone, Guinea, Nigeria, Mali, Chad and Zimbabwe.

Business Insider reported in 2015 that the United Arab Emirates had inserted hundreds of Colombian army veterans in Yemen’s civil war as part of the Saudi-led coalition fighting against the Iranian-backed Houthi rebels.

On May 18, 2016, Foreign Policy reported that during the Obama administration the scope of PMC deployment by the U.S. military in supporting roles to combat zones such as Afghanistan and Iraq had skyrocket to unprecedented numbers. Accordingly, 28.626 contractors support 9.800 regular U.S. troops in Afghanistan, and in Iraq the numbers are 7.773 and 4.087 respectively. As a consequence, the tally of U.S. casualties is imbalanced toward the contractors with 1.540 killed in Afghanistan and Iraq between January 1, 2009 and March 31, 2016, in contrast to 1.301 regular U.S. troops killed in the same period, indicating a greater reliance on the private military sector to carry out traditional military functions.

So what is the problem?

Outlining the historical pattern of employment of mercenaries in the Middle East gives us an indication as to what the possible ramifications might be for the political stability of the region. If one looks to the example of the Mamluks it is not complicated to see how the region might be destabilized by increased reliance on private security providers. The Mamluks succeeded in usurping the rulers which they served, effectively establishing themselves as a ruling dynasty. Whereas it is difficult to imagine a similar situation arise in our age, there is a viable risk that the private security and military sector might obtain more and more functions from the traditional domain of regular armies and internal police authorities, and in authoritarian regimes these might become a tool not so much for providing security for civil society, but to protect the rulers against the latter.

A case in point would be Bahrain where the security forces consist predominantly of Sunni-foreign fighters from Jordan, Pakistan, Syria and Iraq, brought in to quash the popular Arab Spring protests there. However, the underlying dynamic is to protect the Sunni-monarchy against its Shia-majority population, in the process inflaming sectarian divisions by perceived differential treatment on the basis of religious orientation.

The tendency might have geopolitical implications as well, by tipping the regional balance of power in favor of the one with the largest wallet. Another report from Business Insider of 2014, documented how the UAE, geographically a relatively small country, is making strides to become a significant military power to be reckoned, indicated by increased willingness to actively engage in military operations in the region, and a substantial increase in military expenditures. Due to a manpower shortage, the UAE’s military ambition requires personnel from beyond its borders, and this is where the mercenaries come into the fray.

In this sense, mercenaries might become a determining factor in the regions political landscape for years to come. But their lack allegiance to local civil society might remove traditional constraints, and in the wrong hands, be used more as tool for repression than creating stability.