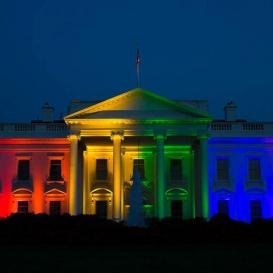 On the 26th of June, you woke up and checked your phone…

Loading up Facebook, you expect to see the usual ‘so hungover, send help’ Saturday morning statuses. However, instead, what greets you is a multitude of rainbows. Most your friends/acquaintances/drunken adds have changed their profile pictures. Although the photographs they have used match their old profile pictures, one thing is different: the photos now look like they’ve had a run in with a packet of Skittles.

‘What is this magic?’ you ask yourself, questioning whether a unicorn apocalypse has finally happened.

However, you soon discover that it hasn’t. What has happened is that Facebook is showing its support for yesterday’s Supreme Court ruling: a ruling that means that same-sex couples will now be able to marry across the USA. The ruling also means that the ban of same-sex marriage in 14 states has been overturned. Pretty cool, right?

Mark Zuckerberg certainly thinks so. Not only did he show his delight at the result of the ruling in the form of a status, he added a rainbow filter to his profile picture, and gave other users the chance to do the same.

Similarly, on Twitter, users were delighted by the ruling. Signing into my Twitter account last night, I expected to be greeted by a few friends sharing news articles about it. What I didn’t expect was to see my whole timeline completely flooded by users absolutely delighted by the news.

The top trending topic worldwide – not just in the USA – was #lovewins. Everyone who added this hashtag to their tweet not only got the satisfaction of knowing they were supporting equality… they also got given a free rainbow emoji automatically added to their tweet.

When looking at tweets attached to this trending topic, it was hard to hold back the tears. Although several were worthy of being featured in this article, this one has to be my favourite:

“Even in Texas?” she asked with wide eyes. “Yes, even in Texas,” I said. #LoveWins pic.twitter.com/LH1SoVyzr4

Elsewhere on the web

Facebook and Twitter weren’t the only social media sites that were celebrating. YouTube changed its logo on Twitter so that it had a giant rainbow in the background. It also released this adorable video (warning: before you watch it, get the tissues ready… it will bring you to happy tears). Reddit also expressed its support for the ruling, adding two guys and a rainbow banner to the top of its homepage page.

Seeing so many platforms, and their users, celebrate yesterday’s ruling was beyond incredible. There are still many steps that need to be made to achieve equality, but this ruling, and its reaction both on and off line, certainly shows we’re heading in the right direction.