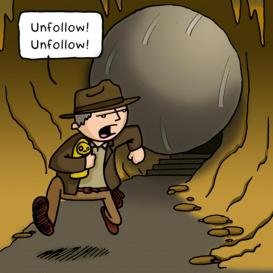 It`s late at night and before you indulge in sweet dreams you decide to open your social media profile and check if the person you are flirting with has posted something new. Hence, you scroll down the page but you don’t see anything from him. Then you start thinking: isn’t that strange? Your next step is to check the one`s account and, when you do that, SURPRISE! you were unfriended. In other words, you were ghosted.

Ghosting is the art of pretending to be deserting from the planet Earth in your attempt to end some kind of relationship. Basically, you are sending your recent friend or beloved to the social North Pole.

Nowadays, when you have the intention to dump someone, there is an easy way to do it. It`s called social media blackout. Individuals use social media features such as unfollow/unfriend or restrict the access to a profile when they are afraid of confrontations and are hiding behind the phone or the keypad. Another social platform that gives the chance of former lovers to be ruthless with each other is the dating apps where you can delete your account at any time you want to.

A famous example of ghosting is Charlize Theron, who allegedly ended her relationship with Sean Penn using this new-but-old method.

According to the NYT, the term has already entered the polling lexicon: In October 2014, a YouGov/Huffington Post poll of 1,000 adults showed that 11 percent of Americans had “ghosted” someone. A more informal survey from Elle magazine that polled 185 people found that about 16.7 percent of men and 24.2 percent of women had been ghosts at some point in their lives.

To be in relationship is not an easy job. Sometimes your relationship is causing you more headaches than happiness or you realise that you are not interested in your partner anymore. Hence, you want to put an end to this relationship but your partner is aggressive or argumentative. Then, you decide to ghost him/her because you think that this is the easiest way to say goodbye without hurting his/her feelings. Actually you are trying to not hurt yourself. What happened next is that all of a sudden you stop answering the messages and the calls from your boyfriend/girlfriend. Also, you push the button “unfriend” and delete the one`s profile from your friends` list.

To cut ties with friends

Most people have floundering old friendships that they want to end but are not sure how to do it. They start thinking about all the memories that they have with that particular person and how bad the one will feel if they say that they don’t have much in common anymore, so it is better to put an end to their friendship. What they do is ghost that person a little at a time by ignoring the one in the social media. Also, they don’t return the missed calls from him/her. Eventually, their friend is ghosted.

The female and the male perspective

Men and women share the same reasons for using the ghosting concept. One of the most illustrious explanations for ditching someone is: a nice guy/girl is too scared to say no. Another reason is that the individual doesn’t care about the ghostee at all. Or, people are protecting themselves from an immature partner.

What says those who do it?

People who practice ghosting offer a couple of excuses. Some state that they don’t know how to extricate from a relationship. Others leave their partner because they think that they are not good enough for him/her. Or, one of the partners has to move to another city and the one doesn’t know if he/her wants to keep the relationship the one has, so he/her decides to ghost his/her partner because it is easier to do so.

Ghostees are the so called victims of the ghosting. When they get the hint, that they have been ghosted, this bitter experience filled them with annoyance provoked by the unfair treatment. Also, ghostees start seeking the problem in them-if they said something wrong or it is because of their outlook or character. A male who wishes to stay anonymous said:

By ghosting someone you are confusing the person and make this individual wait for you.The aftermath is that their self-esteem is reduced to the minimum. Sometimes to express how you feel straight from the shoulder hurts less than ignoring the person in any possible way.

To be “ghost banned”

Ghost banned means that a site that you often use has turned you onto an invisible mode in order to establish if you are a spammer or not. For example, Twitter doesn’t allow you to see your tweets in search results for a hashtag.

Ghosting is a new term for an age old method. Remember high school and how individuals used to stop talking to someone without explaining why? They just vanish into thin air.

If it happened to you a few quick tips to deal with it is to accept it and stop trying to get a reply out of the people who ghost you. Also, realize that it`s not worthy crying over spilled milk and find someone else.

Have you been a ghoster or a ghostee? Share your experience in the comments below!