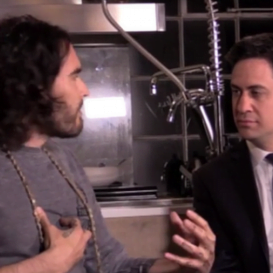 This week’s Social Craze focuses its attention on the Russell Brand/Ed Miliband interview. Or, as people have now branded them, Milibrand.

For one who’s not much into politics like me, I simply had to see what the fuss is all about, since there has been a lot of noise about it all over the web.

There were—and still are—a lot of different opinions on this, but what striked the most at first was mock and general commenting on the settings rather than the actual content of the interview.

People who have a problem with Ed’s accent “change”: have you never socialised in groups where this happens quite naturally? #Milibrand

Possibly the most grandiose swig of water in a political interview ever. #milibrand pic.twitter.com/nQ28dldMJ2

my fav part of the Brand / Miliband? Actually the lit candle behind them – a ploy to put Ed on edge?! #Milibrand

Quite frankly, I was a bit astonished by these comments. Yes, he talks a little funny, but shouldn’t we be more concerned with what he’s going to bring to this country if he gets elected instead of wasting time on futile things like his way of speaking?

Fortunately, more serious comments started rolling out, and the outcome is quite positive.

#Milibrand and Ed’s interview with @LydiaRoseBright might just have earned my vote. Seen a side of him I never saw in traditional media.

Looks like the interview has had a very positive outcome. Should we start chanting #Milibrand for the win, then?