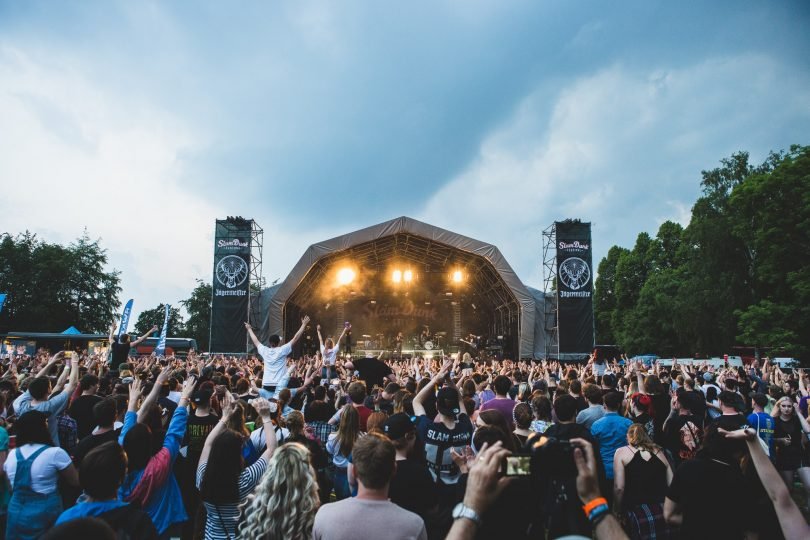 Summer festival season has officially begun and we couldn’t be more excited.

We headed along to the third and final date at Birmingham’s NEC to see what Slam Dunk 2018 had to offer and we certainly weren’t disapointed.

Here’s our countdown of the best bands at this years festival.

We spent the day at Slam dunk festival south. It was a riot we saw lots of great bands including Good Charlotte!! Fangirled like a teen. #slamdunksouth #slamdunkfestival #music #gig #gigs #gigging #zebrahead #goodcharlotte pic.twitter.com/jcP1nz7Rpw

Easily one of the most exciting bands around right now, Can’t Swim could have taken to one of the bigger stages at the festival and still drawn in a big crowd. Their infectious rock is something that was perfect for the summer weather and really not a bad way to kick off Slam Dunk 2018.

Creeper are a band that know how to put on a show. From the moment they begin to the moment they finish they have the audience in the palm of their hands are captivated by their every word. It was clear from this performance that Creeper won’t be going anywhere soon, and rightfully so.

Pop punk didn’t seem to be as present across Slam Dunk’s line up this year however State Champs certainly made up for this. They’re fun, energetic and were perfectly placed for some mid festival pop punk dance vibes. We had a lovely time watching them.

Special acoustic performances are something that festivals are really doing well right now and Slam Dunk really pulled it out of the bag. Four Year Strong took to the festivals tiny outdoor Key Club stage for a one off acoustic performance of some of their top hits. The crowds gathered early to get one of the limited slots and it was well worth the wait.

It’s very very lovely to have Rob Lynch back after his short break away from music. His acoustic performance was full of emotion, memories and there was a real sense of friendship and commardarie from the crowd with people shouting his lyrics back at him. We can’t wait to see him back on the road and releasing new music soon.

Frank Carter is without a doubt the best live performer on the circuit right now. Every single performance he puts on he gives 100% from the get go and doesn’t drop the energy at any point. The signature crowd walk and all female crowd surf took place early and the crowd were in the palm of his hand for him to do what he pleased with. We’d put Frank Carter & The Rattlesnakes up there as our performance of the festival.

Nostalgia galore was present as Taking Back Sunday took to the stage. One thing Slam Dunk does well is bringing those bands we all loved back to British soil for a good old singalong, their 2018 choice of TBS didn’t disappoint. People of all ages gathered to the Monster Energy stage and shouted back every word as the band put on a show to remember; great booking Slam Dunk.

When Jimmy Eat World got annouced as a headliner for 2018 we were instantly excited and it’s safe to say their live show lived up to what we had hoped for and more. Kicking things off with Bleed American and powering through hits old and new all the way through to the closer of The Middle; it was a lesson in how to do a headline slot. What a way to close Slam Dunk for another year.

We’re already looking forward to what 2019 has to offer. Will you be heading along?