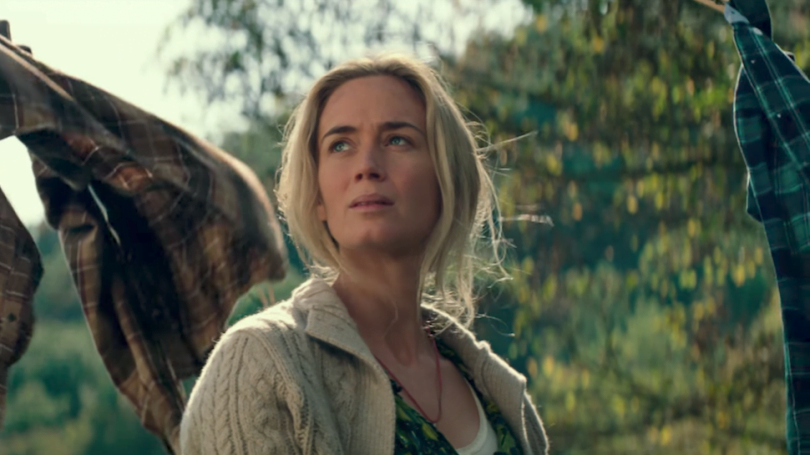 Emily Blunt left me speechless in John Krasinski’s, a quiet place. Despite the nail biting tension, I could hardly look away and was filled with admiration (along with fear-this is a horror after all) from Blunt’s kick ass character Evelyn Abbott. Now, before I go on, I will warn you-this post contains MASSIVE SPOILERS. Read at your own risk.

A quiet place is driven by two factors. Silence and parents’ love. The key motivations for Evelyn and Lee (Krasinski) is to survival for the sake and protection of their children. Sound hunting monsters are wiping out the human race while leads to this film being an almost silent movie. It is a piece of intellectual art in terms of directing and reviews are raving but the most powerful performance came from Blunt and gives an indestructible, female empowering presence.

When the sound ravenous monsters are at every corner, the worse thing to do is to scream. It is meant to be a quiet place. So when Evelyn dreadfully goes into labour, she muffles her contractions. Shields her scream as she stands a nail that goes through her foot and only the dropping of an object causes her to to hide. Her eyes continue to scream and the sweat pours off her as her baby is on its way. But so is the monster. You can’t blame her for letting out one shriek as the labour intensifies. Up until that nail biting, stomach twisting scene, Evelyn muffles her contractions, her stab wound and gut retching fear. While I held my breath throughout, it was a truly kick ass moment for Blunt as an actor and as Evelyn, as she manages to deliver the baby on her own as her husband searches for their other children, the strength and power of women is captivated.

Just as I didn’t think Evelyn could be anymore invincible, the last scene is shared between her and her daughter. With the life saving aid from their father, Blunt and her daughter come together to slay the beasts. With her daughter’s smart brain and Evelyn’s fight-they see they’re surrounded. And with a shared nod and a heroic glint in the eyes, the two women are ready for battle. 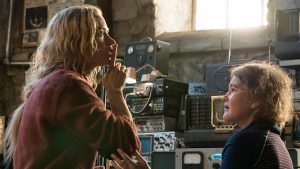 Throughout a quiet place, Evelyn tends to her children, her husband and while grieving for the death of their youngest, she keeps it together to keep her family safe. She is a wife, mother, teacher and protector while carrying a 9 month unborn child. She manifests the strength within women to protect the ones we love. Within the conversations of feminism, I believe there is tension between working and mothering. To have a family may mean to others that she is less of a feminist. However, a quiet place, at times, puts Evelyn at the head of the family as she orders her husband to go and protect their children who are lost and in danger of the horrific creatures that lurks. This is not done in a dominating manner. Evelyn and Lee are shot as equals. Both supporting each other in this apocalyptic type world.

Blunts performance blew me away in this. All of the cast did. But my goodness, I was almost going to suggest that this could be seen as a feminist film…yet, it is so much more than that. It is about family and about survival. But I can’t help but feel that it is Blunt that takes the main stage. With her real life husband directing, the male gaze is non existent. The gaze (if there even is one) is of honour and admiration to the mother of the story. She is a kick ass woman.