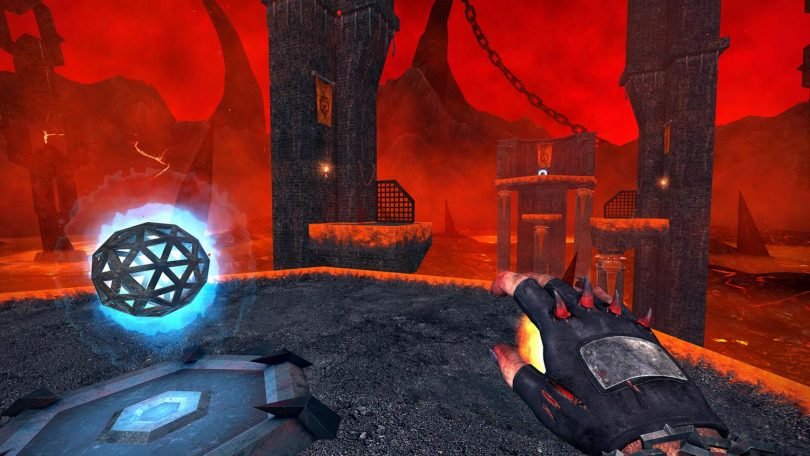 SEUM: Speedrunners from Hell is freaking awesome. Go play it.

Okay, I'll go into a bit more detail. SEUM is a heavy metal FPS speedrunning platformer, kind of like throwing Doom, Super Meatboy and Slayer into a huge blender. The basics are it's a 3D platformer, jumping on floating platforms over a lava lake while glorious metal music is blasting away.

The 'story' is laughably stupid, and for that I love it. Our mulleted hero Marty had his 6 pack of beer stolen by demons, lost his arm (while gaining a demonic one instead) and dived into a portal to reclaim his sweet, sweet booze. This special arm also has the ability to shoot fireballs and to pick up the power-ups of hell.

These power-ups are what makes SEUM really stand out and shine. First up there's a levitate power-up, where holding right click will make Marty rise up. This can be used to fly through a level, and the game makes this torturous by putting spikes, saws, and bombs on every surface of some levels to ensure you have to maintain floating at a perfect height to avoid dying. The next power-up is a Dishonoured-esque teleport, which works by shooting a blue fireball out and teleporting to wherever it lands, with the bonus addition of being able to teleport to the ball in mid-flight by pressing right click again. Next, there's a recall power, which lets you place a checkpoint down and instantly snap back to that area again by right-clicking. Last and least, there is a power-up which spawns a platform wherever the fireball lands, which you can cancel early like the teleport. I hated this power-up, it felt very janky and it interrupted the flow of the level, in a lot of cases I used it to cheese a level by simply jumping and firing it down a la Minecraft to reach a higher platform.

Outside of its 100 level campaign, it has a endless mode which I ragequit not long after trying, as it removes the trial by error approach of the rest of the game as its randomly generated, and a time trial mode which plays all 10 stages of a level back to back to see how fast it could all be done. For replayability, outside of trying to go faster and faster (which is a very compelling reason), each level has hidden Beer collectables and multiple routes to completion.

To top it all off, for me, this game ran like a dream (besides the lack of a borderless mode). Granted, it's not an excellent looking game, it is very mid-2000s looking with it dark reds, browns, and blacks, but running well is always a plus. Another beautiful thing is the FOV can go all the way to 160, which I'm sure will please the settings fanatics dearly. I urge you to try this game. It does have a demo available on Steam, and its relatively low cost is definitely worth it. It's as addictive as chocolate coated crack cocaine.

Will you be playing the game? Let us know in the comments below!