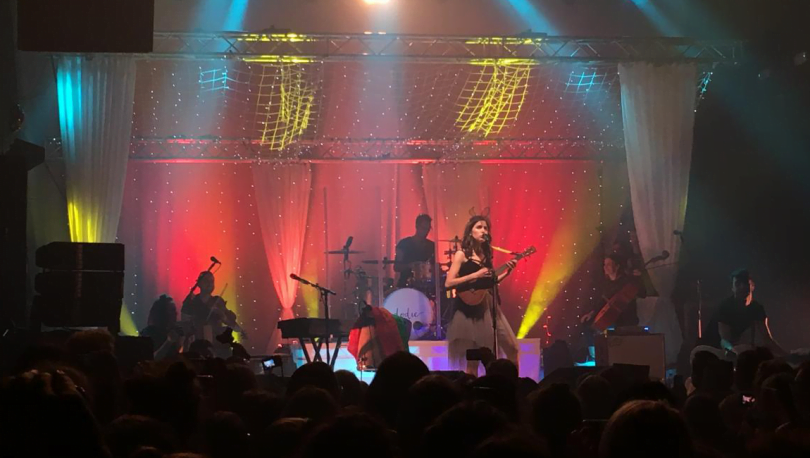 24th of October, your average Tuesday evening, unless you’re a fan of dodie (with a lower-case d) and managed to grab tickets to her sold out headline London date at the iconic Camden venue, KOKO. Dorothy Clark, stage name dodie, is a rising YouTube phenomenon, and is slowly making her way into the music industry. Her second EP ‘You’ reached number 3 in the UK charts; following in the footsteps of her debut EP ‘intertwined’.

The famous Camden venue begins to fill and everyone is filled with anticipation to see how this internet star will perform in a sold-out room to 1500 people.  She opens with the instrumental from her second EP ‘You’ with the stage beaming white lights into the crowd. Her simple stage set up of simple lights and a white background really adds to the feel of intimacy and emphasises how grateful she is to be transported from singing songs with her ukulele in her bedroom, to performing a sold-out show in London, in a room filled with people who appreciate and adore her music the most, like myself.

Her third song on the set list, ‘In The Middle’ is rumoured to be about a threesome, and she plays on this joke as she introduces the song. The crowd uproars into screams, singing and chanting. Each lyric is sung by dodie, with every audience member quickly following, with the atmosphere in the room being electric, every lyric sung held a different meaning behind it for every single person in the room. After kicking off her setlist with an upbeat, funky tune, dodie began to slow things down and performed ‘She’. ‘She’ is a song that dodie has not officially released but it is at home on her YouTube channel ‘doddleoddle’. This song lies close to the LGBTQ+ community, with its inspiration being inspired by dodies realisation of her bisexuality through her teenage years.

During this song, dodie borrowed a pride flag from the crowd and wrapped it around herself, while she beautifully sung the lyrics into the crowd who sung the words straight back at her. Following this slow song, dodie performed her solo piano song; ‘When’ from her first debut EP. This opened up the crowd’s tear ducts, everyone around me was teary eyed or either sobbing. The song is about mental illness, and the question ‘when will I get better’. Dodie often speaks about mental illness on her YouTube channel and her other social media platforms, with it being a close issue to her heart.

self care list in 280 characters
-wash/clean yourself
-eat a healthy snack
-hydrate
-call a kind friend
-make a hot mug of calming tea
-write a happy list
-fresh socks
-take a walk, or open a window for clean new air
-forgive yourself/allow your feelings/give yourself a break!

Lastly, dodie left the wonderful evening on a light note, finishing with the cheery, lively tune ‘Would You Be So Kind?’. Yellow and white balloons erupted from the ceiling, falling onto the crowd below. Myself and everyone around me was in awe at dodie and the magnificent evening she had put on for us. Dodie definitely outdid herself and lived up to the expectations of Camden’s KOKO. To say her headline London date was successful is an understatement; dodie did herself and her YouTube channel proud. You would never think she began by singing songs in her bedroom. Thank you dodie.