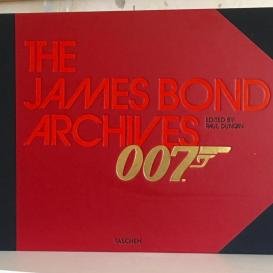 Film is not enough. Yes, I’m not ashamed to admit it – I’m an avid reader of books about films and cinema. There is just something so fascinating about their conception, production and history. With a franchise as vast and iconic as the James Bond series, creating a book capable of documenting its entire history is a tall order.

Fortunately, The James Bond Archives achieves this with considerable success.

Edited by Paul Duncan and published by Taschen, this book was originally released to celebrate the series’ 50th Anniversary in 2012. However, the second, scaled-down version featured in this review was released in November 2015.

This book is a beast. Measuring in at 25.4cm tall, 34.8cm wide and 4.8cm cm thick, it contains a massive 624 pages. Imagine lifting a brick or two. Your arms will be thankful this book has been scaled down.

Aesthetically, the book looks magnificent. With a rich red cover and an engraved and partially-gilded 007 logo, it is rigidly bound with black material. It is a solid construction. Understandably, there is a huge reliance on images within this book. The images inside are printed with excellent clarity and vivid colour. For anyone who appreciates film stills and behind-the-scenes photography, this book is an illuminating archive of them. There are some excellent and revealing pictures to be found. The text is perfectly readable, even in the book’s shrunken size.

The text is constructed by weaving together various interviews from cast and crew who worked on each individual film. For example, if the film was Live and Let Die (1973), Roger Moore, Jane Seymour and director Guy Hamilton would be among the credited names. It’s a great way to tell behind-the-scenes details and anecdotes in a coherent fashion.

The breadth of interviewees included is impressive, especially considering the series has been fighting its way through the annals of time for over five decades. Unfortunately, interviews with Sean Connery aren’t included.

The book chronicles all 24 official James Bond films, including a chapter on the latest instalment Spectre (2015). This was absent in the book’s initial release. In a bid to cement its claim to be an archive of all things Bond, the book also features sections on the comedy spoof and cinematic disaster that is 1967’s Casino Royale and the unofficial Sean Connery Bond film, Never Say Never Again (1983). It wouldn’t be an overstatement to say that this book goes above and beyond what was required to become utterly complete.

Visually stunning and undoubtably informative, The James Bond Archives is easily one of the best Bond books currently available. It glues together all the crucial and fascinating information to achieve what so many other books on this subject have not. For any Bond fan, or film lover, this is essential reading.

Are you a Bond fan? Let us know in the comments below!