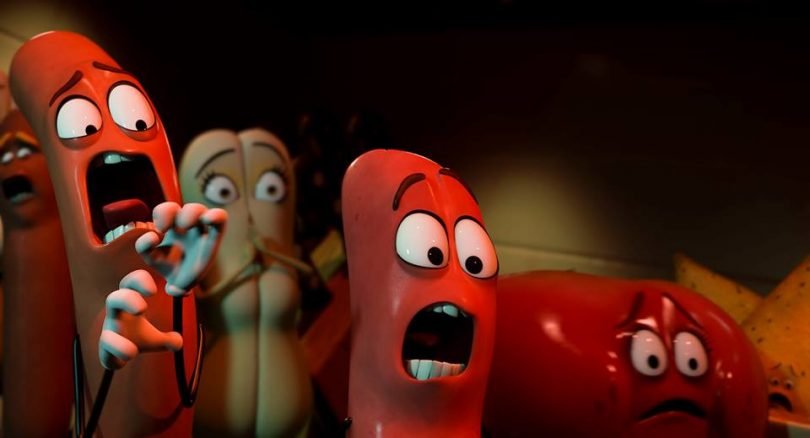 Ever since Toy Story, summer animation has almost become synonymous with parents taking their bored children to see cutesy PG-rated heroes and villains on a rainy afternoon. But 2016 has found animation a new audience – the stoner.

Sausage Party is written by Seth Rogen and Evan Goldberg, creators of Superbad and Pineapple Express, and details the story of a supermarket, where anthropomorphised food lives in chastity in order to secure a place in the ‘Great Beyond’. In other words, they keep it in their pants (barely) so that the ‘Gods’ – or customers – will take them home. But after a jar of mustard is returned, horrified by the reality of what the ‘Gods’ have in store for them, a sentient sausage named Frank sets off on a quest to learn the truth of their existence.

However, as high-brow as this atheist undertone may sound, in reality, it ends up being quite dumb. It spreads its subtext too thickly, and the incessant need to add ‘meaning’ to the film becomes sickly. A sprinkling of subtlety could’ve elevated Sausage Party to excellence, but what we get is just plain crude.

All this would be forgiven if the film were funnier – Seth Rogen and Evan Goldberg don’t do subtle and are distinct in their balls-out in-your-face brand of comedy. But the jokes just don’t land. The puns are mediocre, the characters’ dialogue is meh and the action has nothing of the wit of, say, Aardman’s Wallace and Gromit.

Adult animation in the vein of Sausage Party can work – just look at the success of Family Guy and South Park. However, Sausage Party has more in common with Pixar than any other studio. Even if the action lacks wit, it has a definite Pixar feel, being both frenetic and playful – only with more terror; a white cloud of flour evokes 9/11, with sliced and burst fruit and veg running around in a state of frenzy. It feels like The Hurt Locker meets Monsters Inc. It is in these moments when our childish sense of glee is revived.

Perhaps the crux of where Sausage Party fails can be seen in the trailer: it contains two minutes of pure brilliance, encompassing everything good about this film – rapid action, sharp social commentary and a slice of subversion. And that’s how it should’ve stayed. The plot works as a sketch, not a full-length feature. Sausage Party is like a dough that has been stretched too far, and as holes have emerged, there isn’t enough substance or jokes to fill them.